Cardano, with its ADA token, is up more than 50 percent as news of its smart contracts coming live has emerged. The Ethereum competitor is taking a big step with these contracts in its development, and as a fan favorite coin, it is seeing a lot of positive market sentiment. XRP is the other big winner. The token from Ripple has seen nearly 80% gains in the week, rising from under $0.80 to a high of $1.35 on the back of positivity surrounding its SEC lawsuit as well as an increased developer activity.

Bitcoin sprang back into life last week after a number of weeks of poor performance, but the rest of the cryptocurrency market is now catching up. The entire ecosystem’s market cap is above $2 trillion, and while Bitcoin and Ethereum have the lion’s share of that, other coins are climbing.

The bullish push from the cryptocurrency market comes after a brief fall back following its parabolic rise towards the beginning of this year. But, having crossed back above the $2 trillion market cap, things seem to be back on track for a bullish press as the second half of the year gets underway.

Bitcoin is still leading the pack and hitting its own milestones sitting more comfortably above the $45,000. While it is still a while off from its all-time high of over $60,000, the degree of its returned growth is reliable and steady thus far. Added in the technological advancements from the likes of Etherum and its London hard fork, and the Cardano smart contracts, it would appear that the correction and consolidation is a thing of the past and accumulation is back on the table.

From The Other Markets

In the traditional markets, the week started with the US Senate passing the much-debated $1 trillion bipartisan infrastructure package. The Senate also further approved a $3.5 trillion budget resolution, exciting markets, leading stocks higher from the get-go. Moderate CPI numbers released mid-week managed to calm traders, abating fears of rising inflation causing the FED to taper early. The CPI increased by 0.5% sequentially in July, a deceleration from the 0.9% registered in June, and is the smallest month-over-month uptick since March. This data aligns with the FED narrative that increases in consumer prices is transitory.

With the markets more convinced that inflation is not going to become a problem, the USD fell, taking the DXY down 0.5% for the week to 92.50. Gold and Silver rose as a result, with both metals recovering well from its early week large sell-down which saw Gold briefly touch $1,670 and Silver almost hit $22 before recovering with gusto. Gold has traded back near $1,800 at $1,780 while Silver is back at around $23.80. The status of Oil remains uncertain, with the black gold bouncing between $65 and $68, not able to carve out a decisive move as the outlook of Oil remains uncertain with supply issues and Middle East tensions steering the price in different directions.

The coming week has some key central bank events and economic releases worth noting. On Tuesday, the RBA is due to release its meeting minutes. US retail sales will be released on Tuesday as well. Then, FED chair Powell will speak for the first time since the better-than-expected jobs report. On Wednesday, the RBNZ is expected to raise rates by 25 basis points, while the FED meeting minutes will be published too on Wednesday.

Excitement continues to be seen over at the cryptocurrency space once again, with crypto trading taking centre stage, sucking trading activities and volume out of the traditional asset classes.

Altcoins were abuzz with action, with the likes of XRP and ADA making more than 50% gains as the King of Cryptos consolidated above $45,000. With an increase in trading volume and prices, the crypto market cap has roared past $2 trillion, gaining close to $300 billion in a week.

Nothing Is Stopping This Crypto Revolution

The Senate has passed the $1 trillion infrastructure bill which did not include any amendment to the crypto tax proposed law. It will now go to the House of Representatives, which is expected to take up the crypto law issue in the autumn after their summer recess. The crypto provision faces much bipartisan opposition there as well, with several Representatives all expressing an interest in modifying the language.

Hence, despite the bill being passed through the Senate, it did not cause any negative impact on crypto prices. When the bill passed on Tuesday, crypto prices did not even budge. It goes to show the level of conviction by crypto investors, a strong signal of the underlying strength of this current bull market.

There was several notable adoption news announced last week. These included AMC revealing that it will accept BTC for payment for movie tickets by the end of this year, and Argentina President saying that he is open to making BTC legal tender in his country, citing that BTC could nullify the effects of inflation.

Further to that, soccer star Lionel Messi’s move to PSG caused its fan token price to fluctuate wildly after it was reported that Messi would be paid a large portion of his fees from fan tokens. This is a big milestone in the adoption of utility tokens which will further strengthen the rising place of crypto assets in the world.

Already, crypto trading volume has risen sharply, on pace to exceed $16 trillion this year, up more than eight-fold from last year. For perspective, FAANG stocks trading volume is lagging behind at only $12 trillion. The trading volume in cryptocurrencies has basically flippened that of the most popular tech stocks compared, in a strong sign that money is flowing into the cryptocurrency space, cementing its place in the investing world. 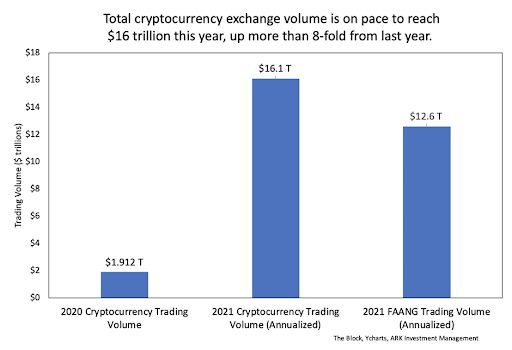 Despite a strong rally to above $45,000, the BTC market still has not seen a significant increase in old coins of more than 1-year being spent. This is very different from the 2018 bear market rally where old hands took exit liquidity and sold on most relief rallies. With old hands not exiting at current levels, it could imply that this rebound in BTC is not a bear market rally, but one that could have sustenance. 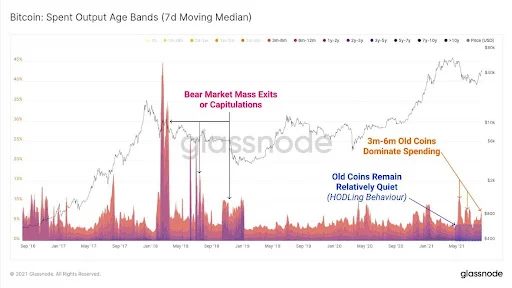 Coinbase Pro whale accumulating activity has also spiked to a high not seen since Jan 2021 last week. In Jan, the spike in whale purchase was preceded by a doubling of BTC price subsequently. Will this large spike give us a similar result this time around?

Coinbase whales weren’t the only active accumulators. Other whale activity has also started rising after falling for the past 3 months, with the dominance of large BTC transactions of more than $1 million rising from 30% in 2020, to over 65% currently.

This reflects a growing share of institutional and high net worth interest coming in and getting involved in moving value across the network.

These could be OTC BTC deals, or even a sign that there is increasing usage of BTC in making large dollar value purchases of items like real estate.  All in all, it signals an increase in BTC adoption within the affluent group of people. 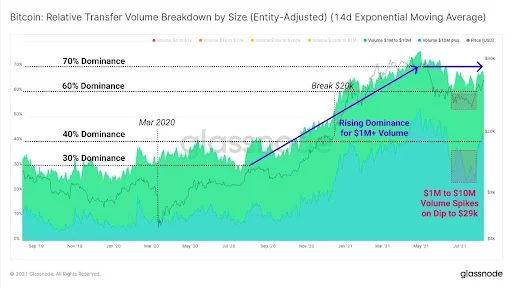 Exchange outflow is also continuing to accelerate in August at a rate between 75,000 and 100,000 units per month. This magnitude of outflow is similar to the period between 2020 and Q1 2021, where heavy accumulation occurred. 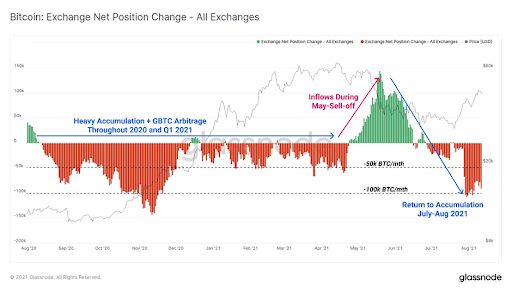 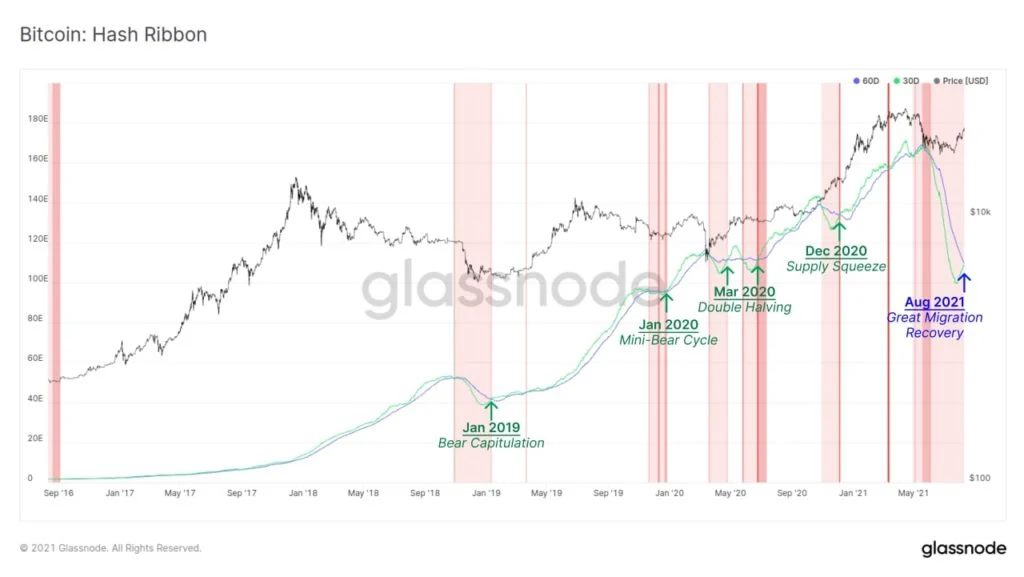 After a huge rally post the success of the London Hard Fork, the price of ETH has been consolidating after hitting a high of $3,335. The burning of ETH is not slowing down though, with more than 50,500 ETH worth around $165 million being burned since. With the Fork now fully done and dusted with, TVL on ETH-based DeFi platforms has rebounded sharply, on track to surpass its ATH made in May.

Miners are also observed to be hoarding ETH post EIP-1559 which burns part of the transaction fees that would otherwise have been paid to miners before the London Hard Fork. Miners’ balance of ETH in their wallets have surged significantly since early August, suggesting that miners are holding on to their ETH which has become more precious. This action by miners will only intensify the supply crunch that ETH will be facing as miners are hoarding at the same time when an increasing amount of ETH gets burned. 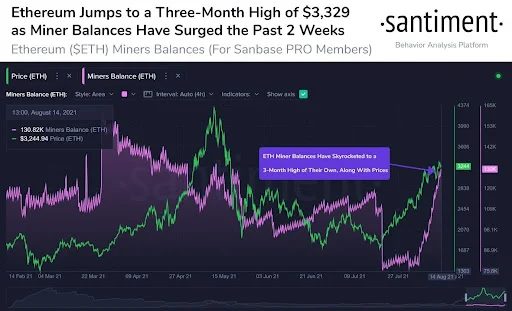 As BTC and ETH consolidated at higher levels, altcoins took the limelight last week, with XRP gaining a magnificent 78%, rising from under $0.80 to a high of $1.35 on the back of optimism surrounding its lawsuit, as well as surging developer activity and rising ODL-product demand.

ADA also rose 60% from $1.40 to a high of $2.25 as the Cardano team finally delivered on its promise, announcing on Friday night the date for its Alonzo Hard Fork which had been postponed many times. The big day would be on or around September 12. Expect hype to continue surrounding ADA, putting a bid under its price in the lead-up to the big event.

Most other altcoins also saw good gains, with an average gain of between 10 – 30% for most other tokens. The new week is opening up strongly after a slight retracement over the weekend, setting the stage for perhaps another exciting week ahead as DOGE and SOL start the week making solid gains.