The New Year 2020 has come, which means that it is a ripe time to summarize the performance of cryptocurrencies, Zcash in particular, and make predictions regarding its behavior in the near future.

We know Zcash as one of the most widely acclaimed coins with privacy capabilities, which poses competition to the likes of Dash, Grin, and Decred. While the usability and fundamental value of these cryptocurrencies can’t be called into question, their overall performance, especially that of ZEC, can be labeled as nothing but disappointing.

The chart below shows that precisely one year ago, Zcash was priced at $61.26, with a market capitalization of $208,41 million, whereas now, and over the course of the current week, the coin is showing total incapability of breaking through the $29.5 resistance. 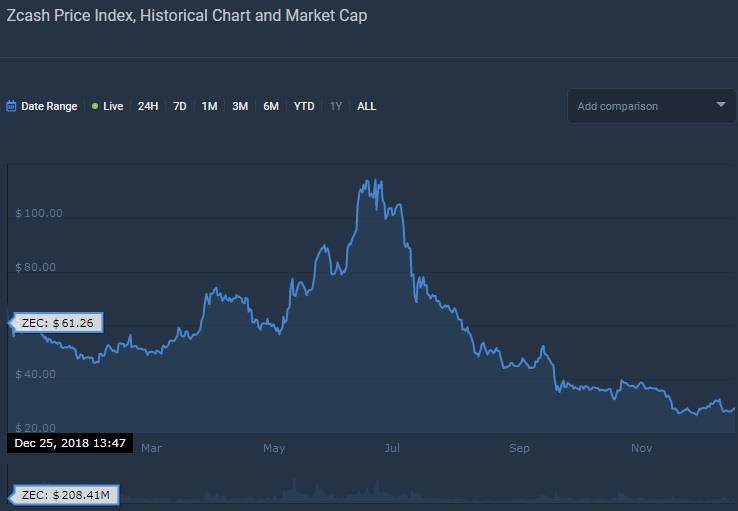 The interesting fact, though, is that the market capitalization of ZEC got a boost by $23.27 million and now amounts to $231,68 million, though it evidently hasn’t correlated with its price. The last two years have been depressing for Zcash as its negative yearly return on investment amounted to double figures, which left the holders who added Zcash to their portfolio at the tail-end of 2017 high and dry.

An upgrade gave a slight pump

However, the performance of ZEC in 2019 wasn’t always gloomy, especially for traders who didn’t hold this coin for a prolonged period of time, and entered/exited their positions at the most appropriate price swings.

First of all, Zcash took an active part in the spring/summer bull rally, which took the price on a trip from around $47 to the 2019 extreme high of $114.38, which was accompanied by the ballooning of trading volume to almost three-quarters of a billion dollars. 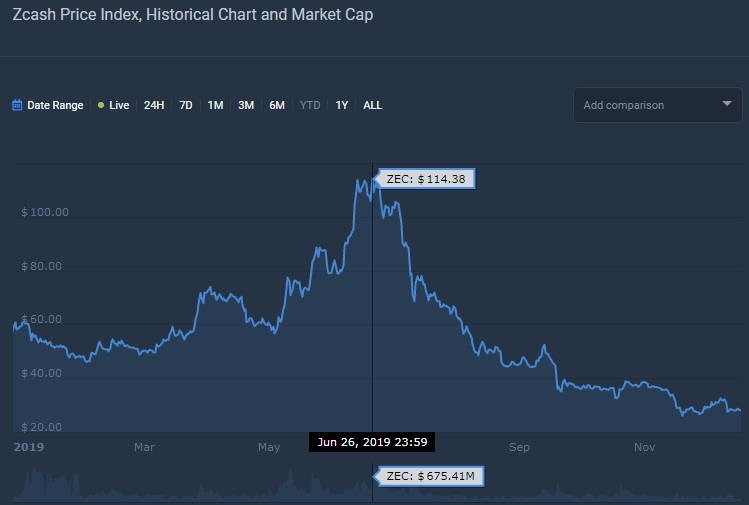 So those who were foresighted enough to jump on the bandwagon at the inception of a relatively short-lived bull market can tap themselves on the back, given, of course, that they managed to exit at the peak or at the following bounce that preceded the immensely strong correction, which has been lingering for the last six months.

Secondly, on December 11, the Zcash team initiated the system upgrade called Blossom, which reduced the block time to 75 seconds, limited the mempool volume, etc. This period of time was characterized by a visible price hike, which should have provided a second chance to the traders to make a profit because then the price had crashed to its current level. 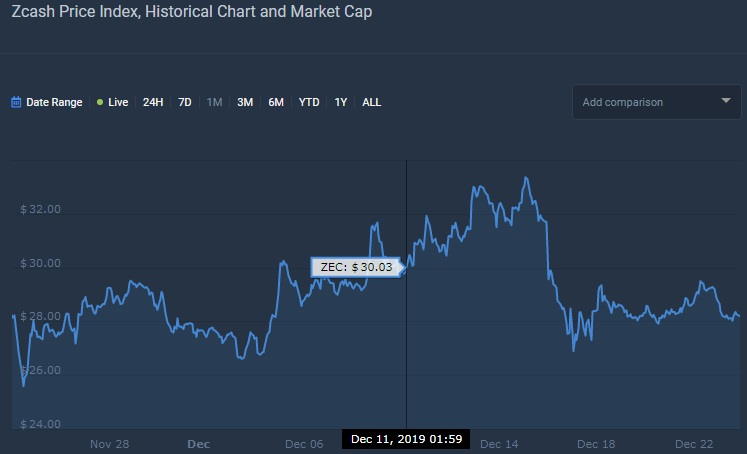 Will there be a Christmas miracle for Zcash?

All of the info provided above clearly shows that Zcash has run out of steam, and we are likely to see a further decline in price. This notion is supported by the fact that ZEC has been stagnating for a while now in terms of daily transaction volume, and the current number of active wallet addresses is at an all-time low. 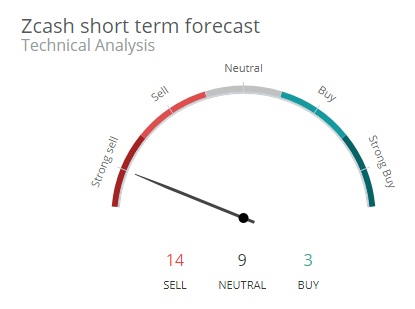 The overwhelming majority of technical indicators: EMA and SMA on all time frames, VWMA, and Hull Moving Average, show that now is the time to begin shorting ZEC as the price is most likely to take a dive in the next couple of weeks. Holding onto Zcash would be advisable only if you are a die-hard fan of this coin, but otherwise, the future looks rather bleak for ZEC.