We certainly can't underestimate the value of ZCash and other privacy coins as a representation of one of the major concepts behind cryptocurrencies - complete anonymity with regard to monetary transactions. ZEC get such recognition by being ranked 27th among thousands of other cryptographic currencies and having a market capitalization of $421 million, as of the time of writing. But ZCash has proven to be the coin that is capable of generating profits for cryptocurrency traders, though last year hasn’t been overly successful, partly due to the stance that authorities, mainly the ones in Great Britain, have towards privacy coins and ZEC in particular.

It’s not a secret that regulators are not very fond of cryptocurrencies since those are poised to diminish their ability to control the flow of money within the population. Needless to say that privacy coins constitute the most significant threat for governmental institutions who use the so-called Anti-Money Laundering regulation to apply pressure on crypto in general, and ZCash in particular. For instance, the British Financial Conduct Authority (FCA) announced the toughening of corresponding regulation for the purpose of deanonymizing transactions by means of cryptocurrencies.

The Revenue & Customs Service (HMRC) created a Cybercrime task force whose task would be to gather and analyze data that could facilitate tracking the flow of money that occurs through privacy coins. The elevated attention towards cryptocurrencies was probably instigated by the prospects of Libra emergence, but, nevertheless, it’s a sure sign that ZCash, as well as traders who are holding that coin in their portfolios, should brace themselves for the attack in 2020. Obviously, the war on anonymity would make the price of ZEC a collateral victim, a notion that should definitely be considered when trading cryptocurrencies and ZCash in 2020.

The last 30 days have probably been the most fruitful for ZCash over a relatively long period of time. Having nothing to show for in 2019 as ZEC had negative results against all three major cryptocurrencies:- 7% against the USD, - 60% in comparison to Bitcoin and - 32% against Ethereum, the coin had demonstrated a strong price growth in January (75% growth in ZEC/USDT pair) before it was caught in a pullback. Now, traders are wondering whether it is time to short ZCash or take a long position.

The daily ZEC/USDT chart can’t provide a straight answer to that question at that point since the price has just begun breathing out after a swift but tiresome rally that lifted the coin value from $26.75 to $66 in just under two weeks time. 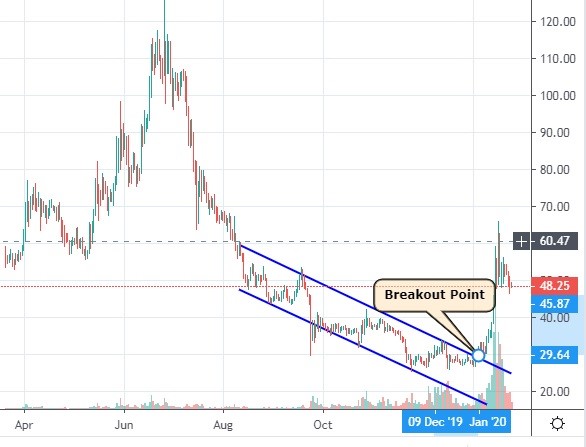 The sharp price action in January has also marked a power move that helped ZEC leave the falling trend corridor that formed over the course of the correction of the second half of 2019. 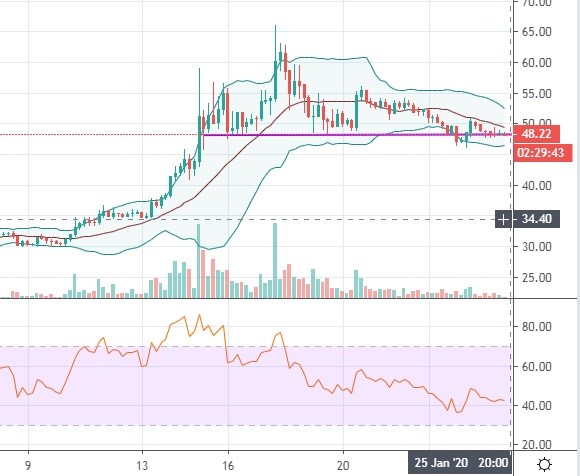 Looking at the 4-hour chart, ZEC is currently moving along the support line at $48.3, having tested it on numerous occasions and held firmly, showcasing the potential for another move to the upside. This maneuver could happen soon as the price is slowly moving into a Bollinger Band squeeze, a harbinger of future volatility. The 14-day RSI shows ZCash to be close to the oversold area, also hinting at affirmative price action.

All in all, ZEC is currently geared for another move in the region of $60 - $65, though that could be its maximum for the first quarter of 2019.