Zcash (ZEC) is known as one of the largest privacy coins around, with advanced technology that allows users to make their transactions private and truly anonymous. However, after a year-long bear market, followed by a slight recovery in 2019, and then once again followed by drops and corrections — Zcash's price is not what it once was.

Not to mention that most exchanges do not appreciate privacy coins, which is what significantly reduced ZEC's volume, price, and market cap. So, what to expect from Zcash in the future? Where will the coin go from here? To answer that, let's first take a look at its past.

Zcash is different from most cryptocurrencies in many ways. First of all, it is a privacy coin, which already sets it apart from most coins. Its technology is one of the best among the privacy coins, which also allows it to stand out among others of its kind.

However, one of the greatest differences comes in terms of price. While most coins that existed at the time reached its ATH during late 2017 and in the first days of January 2018, during the famous bull run that took BTC to $20,000 — ZEC actually reached its own ATH immediately after its launch in late October, 2016. Back then, its price was over $5,200. 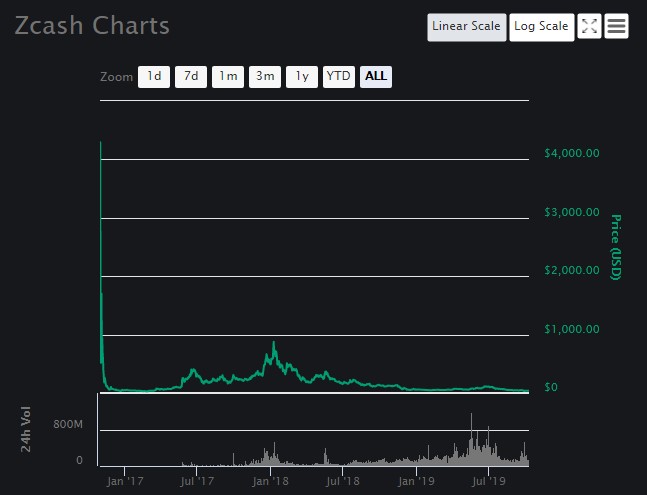 However, this height did not last for long, and ZEC dropped to $60 after less than three weeks. This was a monumental drop and the largest that the coin has experienced. Even Bitcoin's fall from its ATH was not this severe. And, as we know now — Zcash never recovered, and it never again reached its former price.

In fact, even during the bull run of 2017, the highest that ZEC has ever reached was less than one-fifth of its ATH, and its growth ended before it reached $1,000. Its price then kept falling throughout 2018, and while it never reached its lowest point, it did come pretty close to doing it.

Zcash entered 2019 with a price of $61, and for several months, it managed to remain relatively stable at this level. In May, it joined the rally that took BTC above $13,000, while ZEC itself exceeded $100, and even reached a resistance level at $120. However, as soon as it did, the rally ended, and the coin kept sinking over the entirety of the summer.

These days, its price is slightly below its biggest support-turned-resistance at $40, but luckily, ZEC did not sink any lower than that since the early days.

As for its future, it remains uncertain for several reasons. One of the biggest ones is the uncertainty regarding the privacy coins themselves. Since the banks and the governments do not appreciate their inability to track private transactions, exchanges were forced to delist privacy coins, which makes it difficult to trade them. While traders still manage to find a way to do so, it remains questionable how long that could last.

ZEC is unlikely to ever reach its original price and hit thousands of dollars per coin, although the reason is not bad technology or the lack of popularity — instead, it is troubled by the fact that privacy coins are treated harshly by the authorities. This is why ZEC keeps sinking, although a major bull run would likely impact its price in a positive way, and allow it to climb further up.