While no one doubts the viability of privacy coins, especially governmental authorities that still consider this type of cryptocurrencies to be a significant threat to their intention to monitor the global flow of money, which ultimately proves the point; but despite their usefulness in terms of transaction anonymity, these coins, including ZCash, haven’t been among the biggest profit-makers on the market, which is what interests traders the most.

Certainly, ZEC has partaken in the start-of-the-year bull rally, and even gained a very respectable 177% in just over six weeks, but in a broader context, the 27th cryptocurrency remains more of a mean for safe and untraceable transactions rather than a tool for making money. To prove the point, here is a table of a price change that ZCash had over the indicated periods of time.

As you can see, ZEC’s showings haven’t been impressive at all, especially over the last year - the currency’s all-time ROI also remains negative, currently standing at -99%. However, the situation for privacy coins in general, and ZCash in particular, could change in 2020 as the problems in global finance and geopolitics are piling up, which means that more people will resort to alternative solutions, which will boost the adoption and the appreciation of these cryptographic currencies.

However, these negativities should be a cause for concern for the long-term holders of ZEC, whereas traders can still rely on it for profit-making because the coin actively responds to all developments in the market and displays nice price swings, thus providing plenty of opportunities for both long and short trades.

ZEC is clinging to the support line

The correction has affected each and every cryptocurrency on the market, including ZCash. After an excellent run that had happened in the first several weeks of the year, resulting in ZEC hitting the ceiling at $73.5, the market has crashed on the back of a massive drawback on global markets caused, in no small way, by the outspread of coronavirus.

So much so, that the situation caused the price to reject the apparent golden cross, which came into existence on February 6 on the daily time frame and must have incentivized a lot of traders to go long on ZCash, a decision which has ultimately backfired as the price collapsed by 34%, below the 50-period moving average. 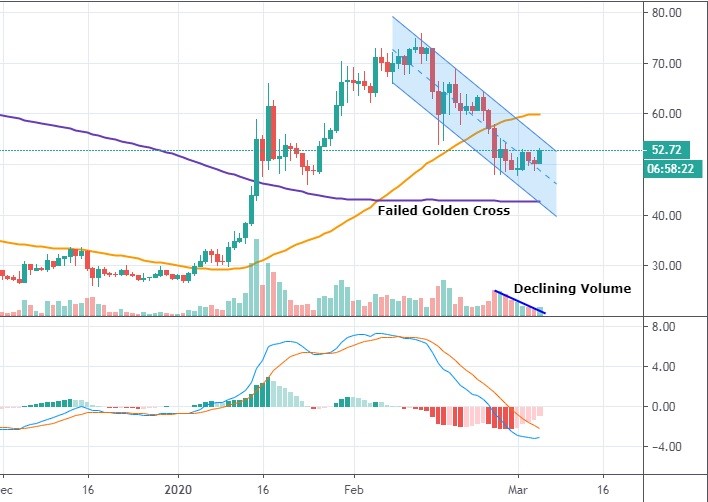 Unlike many other cryptocurrencies, which have already begun showing signs of recovery, ZCash still remains within the confines of the downward channel, accompanied by a steadily declining trading volume, which forms a bearish scenario for this coin. Although ZEC is presently trading sideways, between $48.3 and $53, the bears are apparently preparing to push the price down even more, possibly to the 200MA, which currently runs at $42.5. MACD is way below zero on this time frame, with its lines only hinting at the possible crossing. 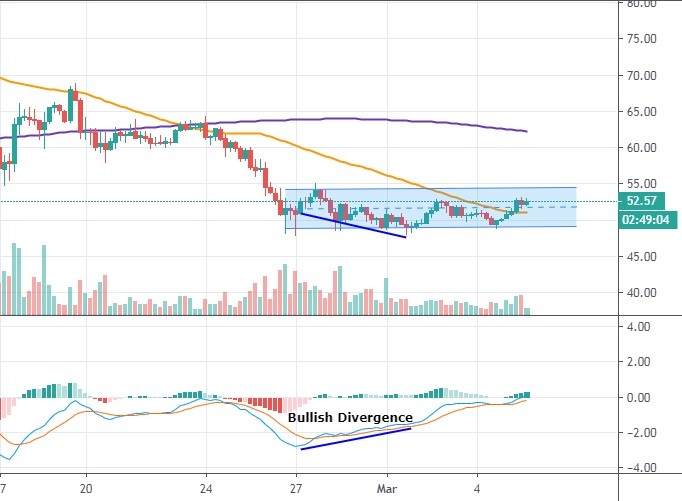 On the 4-hour time frame, the price had already dropped below the 200MA, which is a flashing bearish signal, though it is currently making an attempt to rise above it. This effort might well be a successful one since we have seen a bullish divergence on the MACD. However, too many indicators point to the fact that the bears are still in control here, so going long on ZEC right now would be impractical.