ZB Token belongs to a cohort of exchange cryptocurrencies that have become increasingly popular over the past few years, along with stablecoins, not only because of the perks that they offer to traders, such as a deduction on trading fees, the possibility to obtain a VIP status, etc. but also because of their ability to generate relatively high profits for both holders and traders.

Fundamentally, ZB Token is not that different from the likes of Binance Coin and Huobi Token: it is a native currency of a Chinese-based exchange platform ZB.com that allows holders to purchase exclusive statuses, get a discount on fees, receive rewards, participate in token sales that are carried out on a proprietary launchpad, and participate in voting on the relevant issues. ZB.com itself is a rather prominent exchange as it’s currently ranked 24th with regard to the adjusted trading volume, which stands at $1,3 billion per day, as of the time of writing, being nearly identical to the volume reported by Binance and Latoken. Moreover, it sits in 5th place among the top 50 cryptocurrency exchanges by liquidity, calculated at $38,2 million.

And even if you aren’t interested in migrating to this exchange from your usual trading platform, you should definitely take notice of ZB Token, because it has been performing quite remarkably as of late.

Whereas the majority of altcoins outside the top 20 are showcasing the negative yearly gains, especially after a harsh correction that had disrupted what looked like the altseason, ZB Token remains on the positive side, having displayed the 119.5% price increase against the US Dollar on the year-to-date time frame. It’s only 2% less than the results shown by Bitcoin over the same period of time. In the last month, however, ZB Token has actually outperformed the first cryptocurrency by 28.5%, thus making it a very lucrative pairing for trading against BTC. 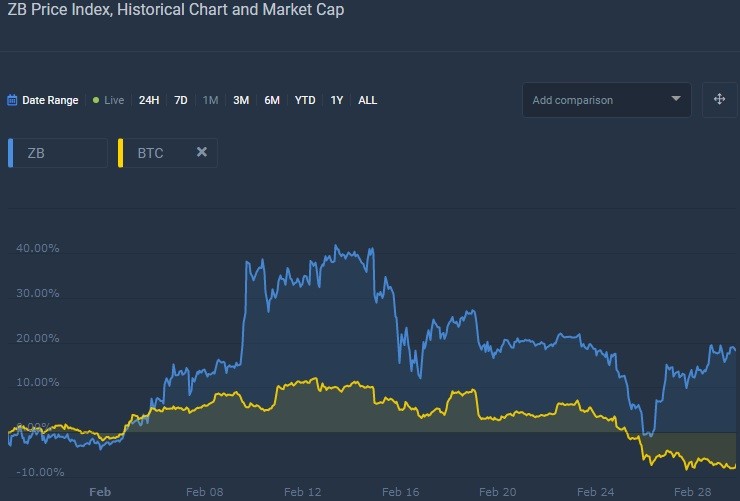 ZB Token on the charts

Starting from the weekly time frame, it becomes evident that ZB is one of the few coins that weren’t severely affected by the market crash caused by the coronavirus hysteria. The currency has indeed suffered a brief downturn after a strong rally that lasted for six weeks straight and catapulted the price from $0.18 to $0.38, which, by the way, left it within the reaching distance to the all-time high of $0.43, which ZB had accomplished last August. 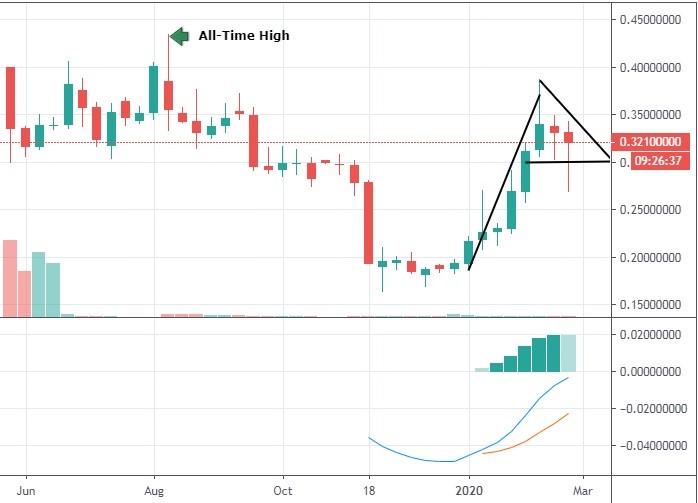 Therefore, if the cryptocurrency market is to recover swiftly after the setback, ZB Token could well be aiming for a new all-time high in the next couple of months. The coin is currently in the process of forming a bullish flag pattern - the probability of it breaking out to the upside is supported by MACD that is actively moving north, accompanied by a swelling histogram. 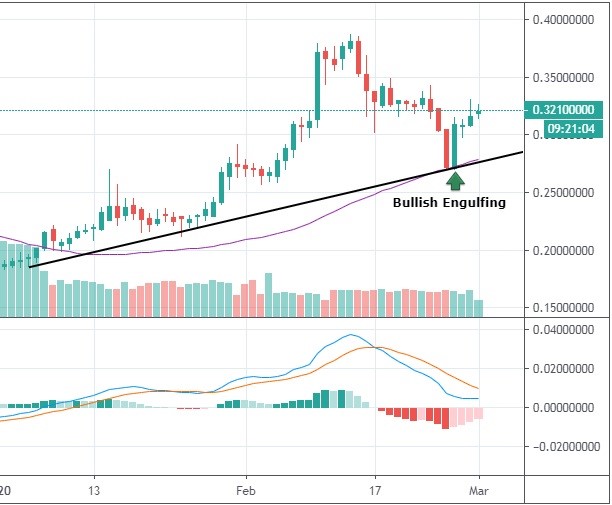 ZB Token appears to be even stronger on the daily time frame since it had bounced off the 55-period moving average, without going under it, to the previous support - now resistance - at $0.32. During this move, ZB was on the brink of ruining the uptrend structure but managed to sustain it and recover with a bullish engulfing candle, which signals about the likely continuation of the ascending trend, though it’s necessary to wait for confirmation at the mentioned resistance level.