Whenever the cryptocurrency market has a green day when the buyers are pushing the prices higher, there is a large group of DeFi coins and tokens that seem to be pumping like there’s no tomorrow. It’s already certain that traders will remember the year 2020 not only for the devastating effect of COVID-19 pandemic on financial markets and global economy, in general, but also as a period of a total DeFi craze, the scale of which is comparable to the ICO frenzy in 2017.

We see new blockchain projects for decentralized finance popping up almost every week, and nearly all of them make substantial gains right after the coin/token listing on exchange platforms. One of such freshly released currencies is dubbed yearn.finance (YFI) - it became available for trading on July 21 at the listing price of $739.44, which is also its all-time low for the time being.

An open road in front of yearn.finance

It has been nothing but gains for YFI since it appeared on traders’ radars, with the majority of trading volume being concentrated on Binance, Uniswap, and MXC. In little over a month, yearn.finance made a staggering 639% to the upside against USD; outperformed Bitcoin by 600% and Ethereum by 477%. Last week, YFI got 106% price appreciation in USD, with around 80% of that being gained on August 29 alone. 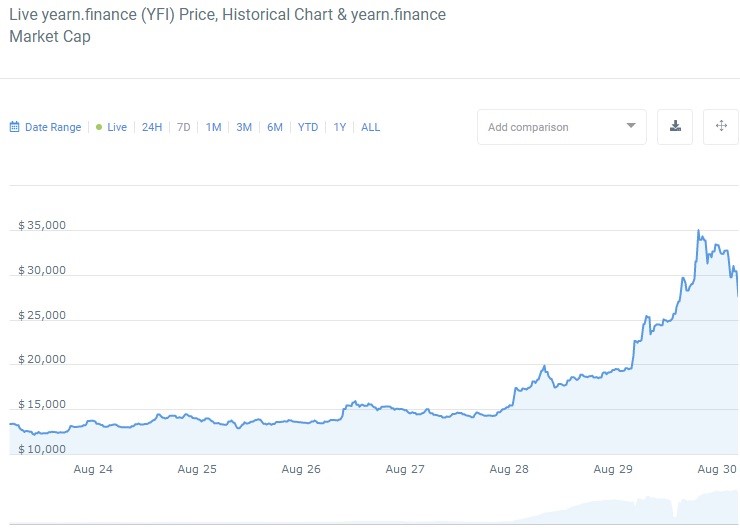 The historical chart shows an incredible bullish dynamic that kept pushing the price higher throughout the entire month of August until it climaxed on the 29th at the price of $38,855. The last upswing from $28,000 to the current ATH happened after the project had disclosed its market capitalization of $1 billion, which exceeded most expectations, although it has already dropped to $879 million due to the ongoing pullback in price.

There’s still not a lot of historical price action to go around, so we’ll look at a smaller 4-hour time frame for the YFI price analysis. 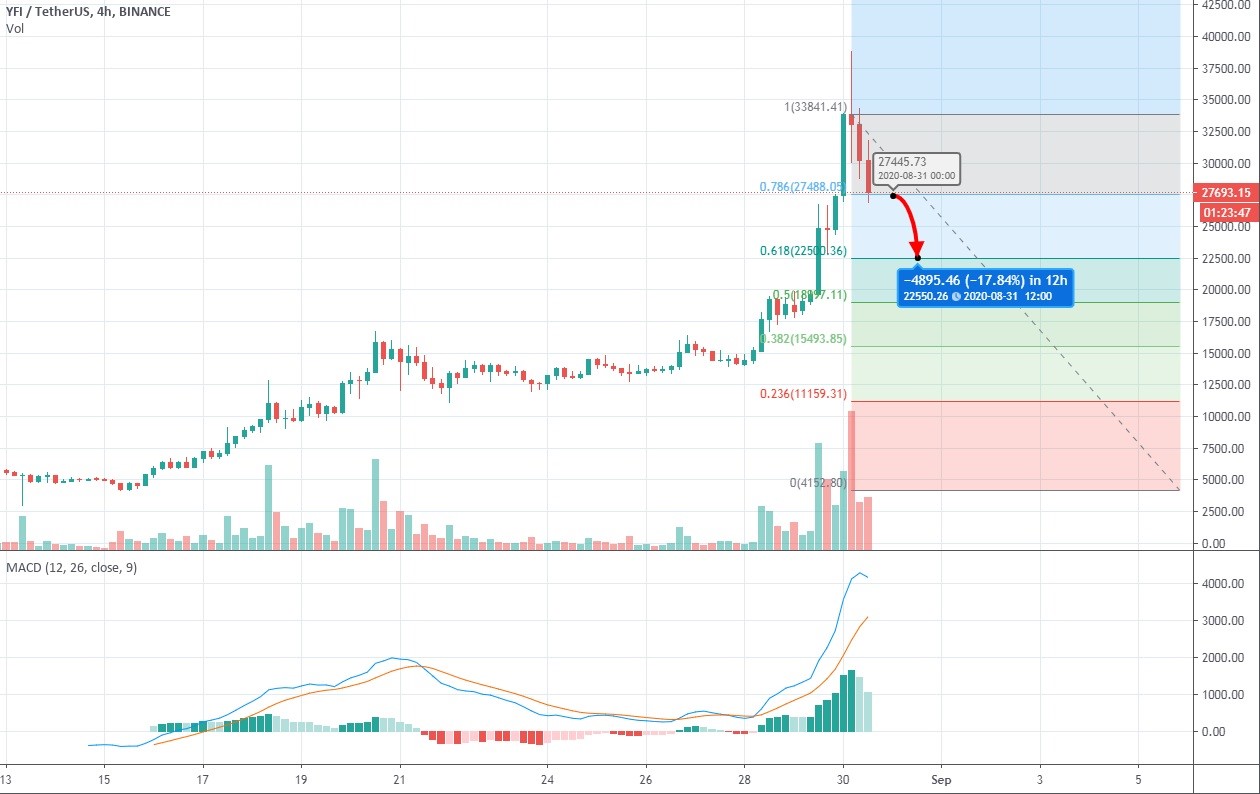 After reaching the point of exhaustion, the buyers have backed down and let the retracement step in, which has already pushed the price to $28,000 or 0.786 on the Fibonacci retracement grind. MACD is far into the overbought zone already curling up for the bearish crossover, so the pullback is likely to persist over the next three to five days and take YFI to 0.618 on Fibonacci or $22,550 price-wise.

Like most other DeFi currencies, the yearn.finance ecosystem was built on the foundation of Ethereum blockchain by a well-known developer Andre Cronje whose work, as many crypto experts reckon, is a shining example of fast-paced product development and adherence to the roadmap.

Basically, yearn.finance serves as a yield aggregator that cooperates with different Ethereum-based lending platforms (Compound, Aave, dYdX) to re-balance the yield during the interaction between smart contracts. The team is also working on credit delegation vaults and automated liquidation.

All in all, yearn.finance has been widely regarded as one of the most promising and rapidly developing DeFi projects, although it does rely heavily on the work of Andre Cronje, as well as the price of ETH, a significant drop of which could lead to an even larger decrease of yields provided by YFI, along with its price. Finally, traders should be aware that yearn.finance is still largely illiquid token, meaning that selling worth of $100,000 in YFI could make the price tank by more than 2.5%, creating a huge slippage.