XRP price has seen quite a lot of activity in 2019, both positive and negative. After reaching its ATH on January 4th, 2018, the XRP price crashed, and barely a month later, it was already below $1. By mid-2018, it reached its new bottom at $0.26, and it often made attempts to surge back up, only for it to come crashing down again. The price was usually between $0.50 and $0.25. 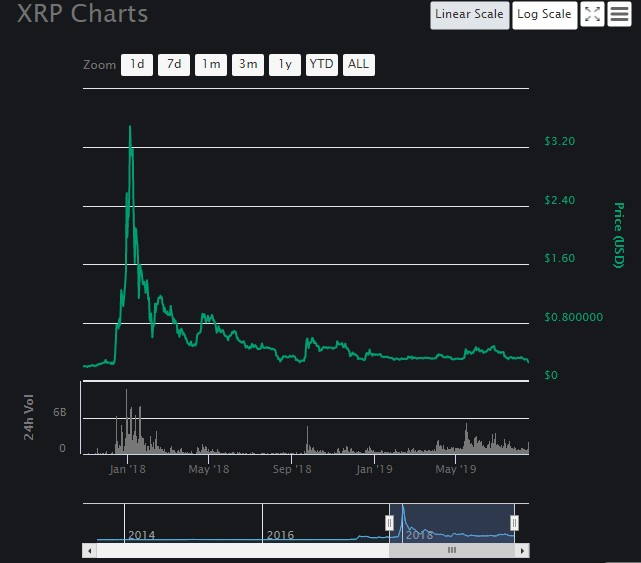 This is how it ended the year, and entered 2019, sitting at around $0.36, which was considered to be the XRP price's new main support. However, as soon as 2019 had started, the price broke this support, still under the strong effect of the bear market. It dropped to a new bottom of $0.30, which managed to hold it ever since.

XRP started seeing first attempts at the growth in late February, when its price made several attempts to return to the support-turned-resistance at $0.36. At first, these attempts were cut short barely halfway between $0.30 and $0.36. But, the price kept trying, and it finally managed to reach the resistance level in early April. Unfortunately for XRP, the resistance was too strong to be breached, and it rejected the price, forcing it back down to $0.30. The support held, although the price could not move away from it for weeks. 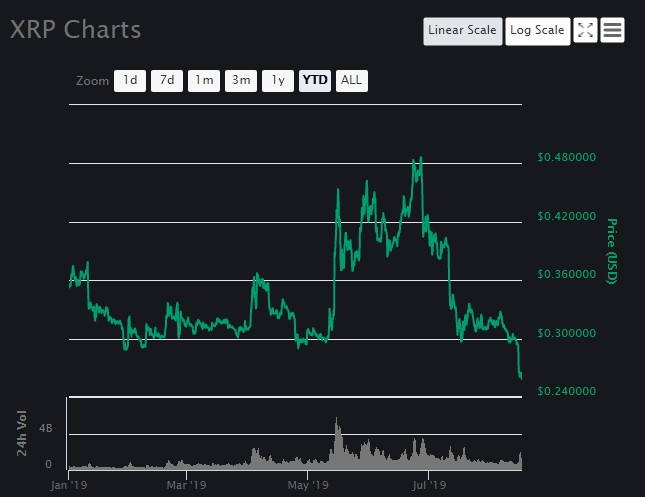 Then, in mid-May, from May 12th to May 15th, XRP price surged rapidly, thus finally joining the rest of the surging crypto market. It broke the $0.36 resistance level seemingly without even feeling it. It also broke the next resistance, at $0.42. However, halfway towards $0.48, it lost its strength, and it dropped back to $0.36, only to grow back up and once again breach the $0.42 level.

Its growth was once again cut short, pretty much at the same place as the previous one, and the price dropped yet again. This time, it stopped halfway towards $0.36, and it surged back up for the third time.

This time, however, it finally managed to reach the next resistance level at $0.48. This was the price's highest point in 2019 so far, although it was followed by a major price drop which still continues to day, seemingly with no plans on stopping.

The price crashed on June 26th, and at first, it seemed like the price will simply drop back down to $0.38, like it did during one of the previous drops towards $0.36, which usually resulted in another growth. However, this time, the minor support at $0.38 ended up broken, and XRP price just kept dropping.

Not only that, but also broke the support at $0.36 on July 10th, for the first time since May 14th. The price kept dropping until it finally reached its starting point at $0.30. It spent the following month — from mid-July to mid-August — fluctuating between $0.30 and $0.33, with the last surprising twist coming only a few days ago, on August 11th. This was when XRP price suddenly dropped the support at $0.30, for the first time in 2019. 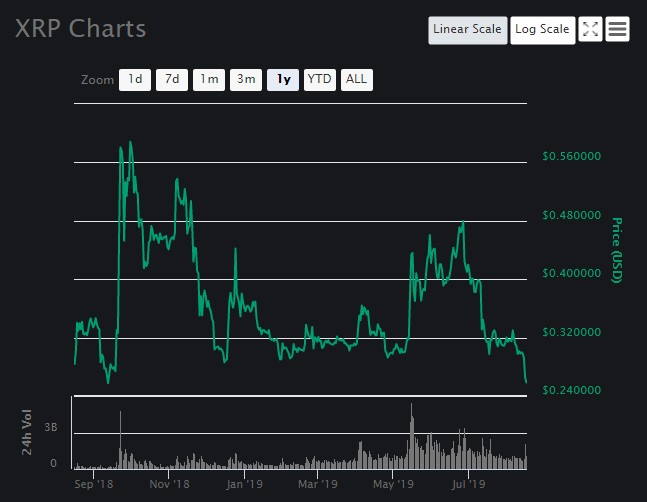 In fact, XRP might be on its way to the price it had before the surge of the late 2017 and early 2018, which would make it one of the worst performers in the sector, and definitely the worst one among the top 10 cryptocurrencies.