XRP, formerly known as Ripple, is the third-largest cryptocurrency by market cap, with a m.cap of $11.8 billion and a daily trading volume of $1.3 billion. Obviously, that makes XRP quite a highly-traded coin, and one of the most popular cryptocurrencies around.

Of course, not all of XRP's daily volume comes from crypto trading, as this particular project finds itself in a unique situation to be the only cryptocurrency that is used by hundreds of banks and financial institutions around the world.

This comes from the fact that Ripple, the company that created XRP, also created a number of payment products that utilize XRP. These products are then offered to banks and financial institutions, which have accepted them due to their innovative solutions to some of the major problems in traditional finances.

Ripple's products are capable of processing international payments instantly, through the use of XRP and partnerships with multiple different banks, exchanges, and similar institutions. This is also where XRP's value comes from. In other words, the more banks start using XRP, the higher its price should go, in theory.

With that in mind, let's see how XRP performed throughout its lifetime, and try to use that knowledge to predict where it might go from here.

XRP is one of the oldest coins that are still active in the crypto market. More than that, it is, as mentioned before, the third-largest cryptocurrency. For the first half of its existence, the coin had no real use cases, as Ripple had yet to develop its payment solutions.

During that time, XRP's price was only a fraction of a cent, and that was the case for over 4 years. However, in 2017, XRP joined in on the price surge that led Bitcoin to its all-time high of $20,000, while XRP itself climbed up to $3.38. The coin did not manage to keep this high price for long, however, and soon enough, the bear market hit in early 2018.

XRP crashed alongside the rest of the market, and while there were several attempts to try and grow back up, its price kept being knocked down by either bearish market or corrections.

Thanks to its relationship to Ripple, which made major success throughout 2018 and 2019 when it comes to partnering up with bank after bank, XRP managed to remain relatively stable. In 2018, its price was mostly fluctuating between $0.35 and $0.50. 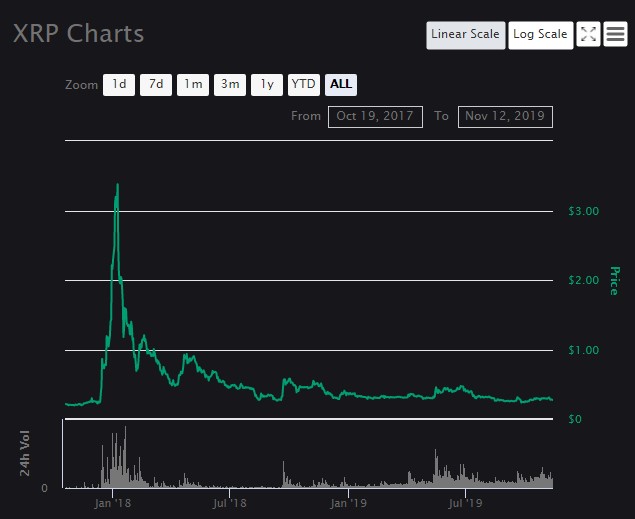 In the first half of 2019, however, those fluctuations got smaller, with XRP going from $0.30 to $0,40. However, after the series of bull runs in April, May, and June of this year — the coin sank to a support at $0.25, occasionally venturing up to $0.30, but mostly remaining between the two levels.

Where will XRP go from here?

As mentioned, XRP price mostly depends on its usefulness as a payment carrier, in service to Ripple's payment products. However, some events may be indicating that Ripple is careful not to let the coin be too volatile, on purpose. Large volatility might impact the company's success in convincing the banks to use it, or it might affect their plans in a different way.

None of this is confirmed as a fact, but many theorize that this is the reason why XRP might be so stable. As for Ripple's supposed ability to control XRP price, many have suggested it multiple times in the past, but a particular case from a few weeks ago saw XRP surge, and Ripple released a major amount of new coins immediately after that.

Many skeptics have connected the two events, claiming that Ripple tried to nullify the surge by dumping a large number of new coins into circulation. Whether this is true or merely a coincidence was never exactly determined.

As for what XRP price could achieve — it had already proven that going beyond $1, $2, or even $3 is within the realm of possibility. Of course, this might only be possible if BTC, the market leader, goes up to its own ATH. Ripple's stability, on the other hand, might be more likely, especially if the company is indeed controlling the coin's price, as it appears to be the case.