Where will XRP go from now on?

XRP, the third-largest cryptocurrency by market cap, is currently one of the worst performers among the top 10 largest cryptos. While the coin does have a market cap of $9.6 billion and a daily trading volume of $1.4 billion, its price is currently at the lowest point in 2019.

XRP has always been surrounded by a lot of negativity due to its close connection to its parent company, Ripple. In the past, the coin was accused of centralization, being a scam, being fake crypto, and more. In truth, the coin was simply created as the fuel that would power Ripple's payment products.

Ripple offered its products to the banks and financial institutions around the world, and it managed to partner with more than 300 of them in the last several years. However, XRP itself managed to grow to the position of third-largest crypto due to this connection with Ripple. But, its price is far from perfect, as we are about to see.

XRP entered 2019 with a price of $0.37. Of course, this is far from ideal for the coin, and significantly below its ATH, but it is a starting point for this year, which will show us how the coin performed further on.

XRP's bad performance started rather quickly, and after a week or two of stability, it dropped below $0.32, which became a major resistance level. From January 24th until May 12th, XRP struggled to breach this resistance, even succeeding on a few occasions, although only briefly.

Before long, the market always returned it below this level, although it never went far from it in the first part of the year. In mid-May, however, XRP finally joined in on the bull runs that led most of the market up, with some coins even going halfway or more towards their ATH, Bitcoin included.

As for XRP, it surged rapidly and without any previous warning, hitting $0.48 within only a few days. This level became its new major resistance — one which it attempted to breach 4 times, each of which resulted in failure and price rejection. 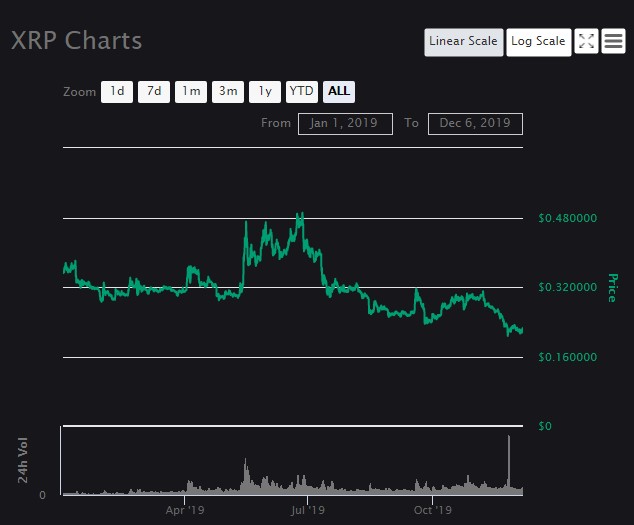 This continued for about a month and a half, until June 22nd, when BTC lost its momentum and started dropping, taking the rest of the market with it. XRP, naturally, followed, and in a few weeks, it was back at $0.32. The resistance-turned-support even managed to hold for a few more weeks, before finally breaking on August 6th.

This time, however, XRP did not remain slightly below this level, and it even sank to $0.25. It stabilized there for a short period, before attempting a surge that took it back to $0.32, only for its price to be rejected yet again, and launched even deeper down, this time breaking the support at $0.25, as well. It attempted another growth in October, and it closed in on $0.32 once more, but it never reached it, let alone broke it.

Instead, as November 2019 took off, XRP sank deeper than ever, ending up slightly over $21. Right now, it sits at $0.22, after 2.66% growth, which it saw in the last 24 hours. However, considering that the entire market is now trading in the green, this is more of an overall sentiment, rather than XRP's own recovery.

Where will XRP go from here?

It is said that XRP's price depends on the number of banks that are using it, which might be true. However, the coin's daily volume exceeds $1 billion, while its price continued to sink ever since late June, indicating that it is being used, but also that this does not reflect on the price at all.

XRP also appears to be less sensitive to market movements — and especially on Bitcoin movements — than most coins. It was late for every bull run, and even when it participated, it advanced slowly, and it did not grow that much. Many believe that the reason is the fact that Ripple is manipulating its price, as the largest XRP holder in the world.

This might also be possible, as the company released a large number of coins when XRP started surging earlier this year, which managed to cut its growth relatively soon. In the end, it might be possible that Ripple wants XRP price to be low for its own reasons, which might not be particularly encouraging for those who hoped that the coin would skyrocket with the end of the year approaching.