NEM (XEM) is not exactly among the oldest coins in the crypto market, but it has been around for almost half of its existence. On top of that, it spent the majority of that time among the top coins in the crypto market. Even these days, when its price is the lowest it has been since early 2017, it still sits among the top 30 cryptocurrencies when it comes to its market cap, although many would agree that NEM is unlikely to reclaim its former glory.

Even so, the question of any cryptocurrency's future has always been an intriguing topic for most investors, so let's try to see what NEM's past can tell us about its future.

The coin was launched back in early April 2015, with a price of $0.000305. Its price was never completely stable, although it was always so low that its fluctuations were never particularly meaningful.

NEM finally started seeing the real price change in early April 2017, two years after its launch, when it grew to $0.228. After hitting a resistance, its price dropped, but it also rose again, this time going even higher, to $0.315. After that, it dropped once more, and then it skyrocketed in a surge that took Bitcoin to $20,000. NEM itself rose to $2, which was its all-time high (ATH), which it reached in early January 2018. 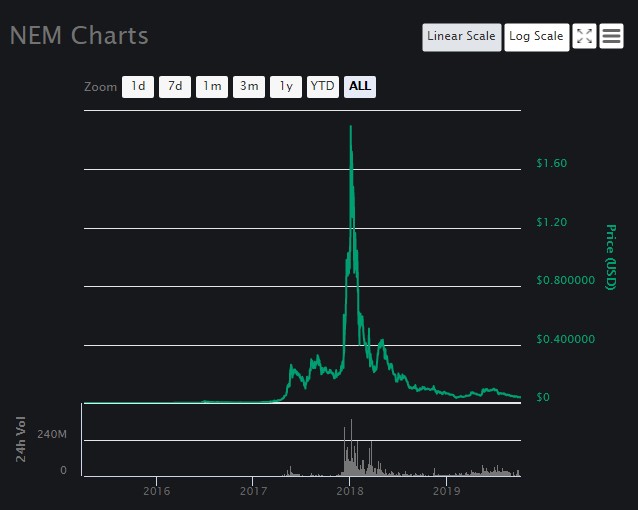 Like all other cryptocurrencies, NEM then dropped back down over the course of the next few months, hitting $0.21 by April 6th. The following surge in May 2018, wrongly believed to be the end of the bear market, only took it up to $0.4, before the coin continued spiraling down throughout the rest of the year.

When we look at the big picture and view NEM's behavior in 2019 as the latest one in his years of existence, the coin's overall behavior is only a small, barely noticeable bump. On its YTD chart, however, the situation seems much more dynamic. 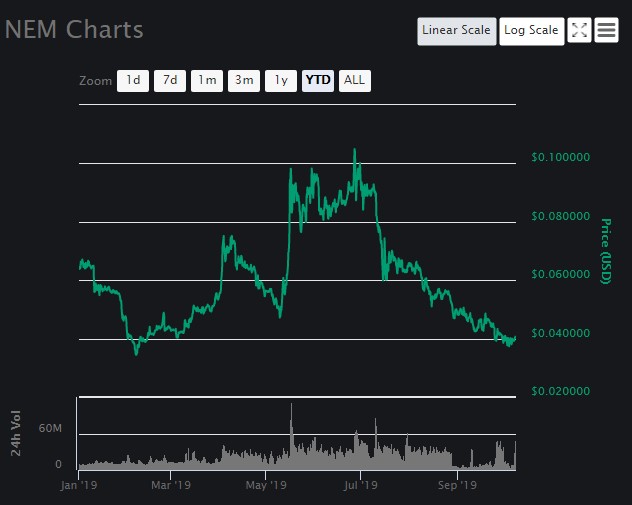 NEM started the year with a value of $0.065, only to keep dropping and breaking support levels until the end of the first week of February. After that, the coin slowly started rising, and it broke two resistances — at $0.04 and $0.06. Unfortunately, the one at $0.08 stopped its advancement, causing a minor correction. However, that is also when Bitcoin took off, taking the rest of the market with it, and NEM was among those who came along.

The coin went all the way up to $0.1, although this resistance proved to be too strong for it to overcome. From mid-May to mid-July, NEM was fluctuating between $0.08 and $0.1, trying to breach this resistance, but with no luck. When the correction took place, NEM fell without a struggle, originally stopping at $0,08 for a time, but it eventually broke this support and dropped to the next one, at $0.04.

As mentioned, its current price is only a fraction of a cent above this level, meaning that the support is still holding, But, if a real rally doesn't arrive anytime soon, NEM's behavior indicates that this support might very well be the next one to fall.

NEM doesn't often feature periods of stability, and outside of bull runs, its price is always dropping. The coin's bottom does seem to be at $0.04, and breaking this support would be a big negative thing for NEM. Still, its price was lower than this before, and it could reach those lows again. If it does happen, then NEM price will reach its lowest point in the last few years, which certainly is not going to do it much good.