When it comes to cryptocurrencies, there are as many approaches, as there are projects, with some of them dedicated to solving problems, others being after innovation, and some simply wish to be used as a currency and nothing else. When it comes to IOTA, the project has innovation written all over it, and its advanced technology has caught the eye of many companies that have similar interests.

However, many in the crypto industry have been wondering how is IOTA doing in terms of price, and what to expect next? To understand this, it is important first to take a look at what the project has been through so far.

As you may know, IOTA (MIOTA) was launched back in mid-2017, and it got caught up in a series of rallies that followed almost immediately. Its first surge started back in August 2017, when the coin grew from $0.26 to $1.04 in a matter of a single week. After that came a drop, which was followed by another surge which started in early November. This one led IOTA to its all-time high, at $5.67, which the project reached around December 20th, 2017. 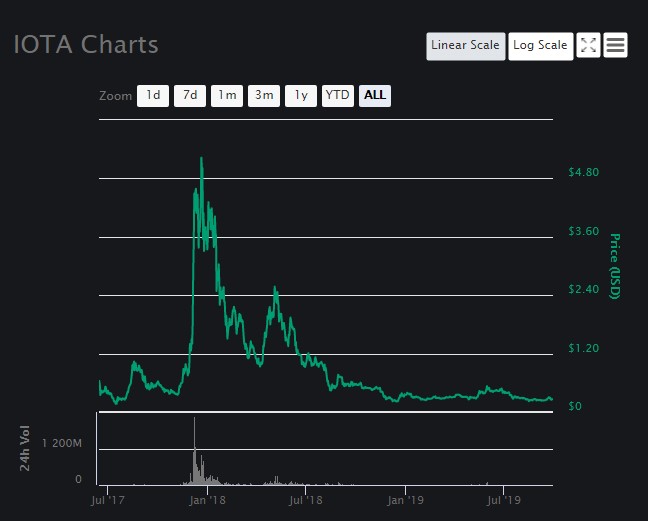 As the year ended, and 2018 bear market took place, the project saw major price loss, just like any other, and apart from a significant surge in April/May 2018, IOTA price has mostly been going down.

The project saw its last big drop in November 2018, as part of the price crash that took place after Bitcoin Cash hard fork, which led to hash wars and the creation of Bitcoin SV. IOTA never really recovered from last year's losses, and instead, it found certain stability, at least when compared to its volatility from 2017 and 2018,

When it comes to IOTA price's entire history, the project has been relatively stable in 2019, as mentioned. However, if we take a look at the project's price in this year alone, some minor fluctuations are still quite visible. 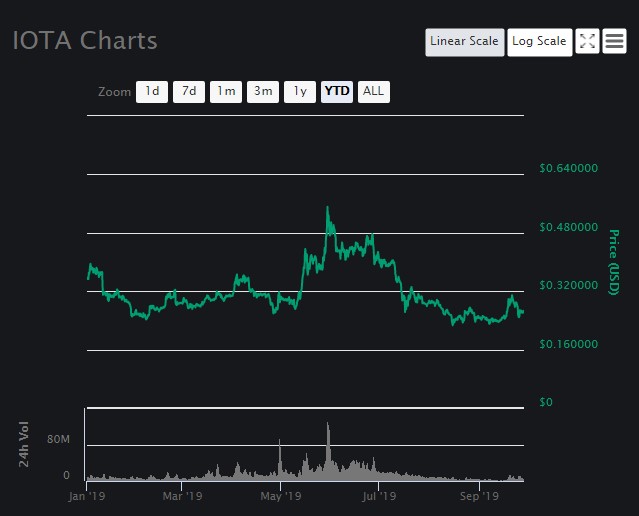 On a YTD chart featured above, it is clear that the project spent the first half of the year trying to break through a resistance level at $0.32. This level acted as a strong barrier until May 12th, when it finally allowed the price to surpass it, in one of the rallies that were finally bringing recovery to the market, after more than a year of price drops.

IOTA was actually quite unresponsive to the rallies that took place earlier this year. The first one was also one of the biggest of them, and it took place on April 1st. And, as the chart shows — IOTA barely responded. It finally joined the surge in May, although it did not perform nearly as good as Bitcoin, which exceeded more than half of its ATH at the time. IOTA, on the other hand, went up only barely, and was stopped by the first big resistance that came after the one it had just breached.

In other words, the project just stopped at $0.48, and after trying to breach it for a few weeks, the bearish trend that took place in June knocked it back to the same levels from the beginning of the year, which is where the coin's price can be found right now.

Unfortunately, IOTA does not show a particular willingness to grow. The project seems to have found stability at around $0.25, and the only regular fluctuations are between this level and $0.30.

If a major rally happens to come in the following months, IOTA is likely to behave in the same way as it did during the May/June 2019 surge — growing by as little as possible, and returning to the levels where it sits right now as soon as the hype passes. The project has been relatively silent, and while it still sits among the top 20 largest coins — its price simply doesn't show any serious ambition when it comes to growth.