Dash (DASH) is currently the 22nd-largest cryptocurrency by market cap, with its m.cap sitting just below $500 million. Meanwhile, its price is currently at $54.07, after growing 6.47% in the last 24 hours. The coin's purpose is to be used as digital cash, which is where its name comes from.

However, as a privacy coin, it is often loved by the community, while despised by the authorities. This often leads to interesting price moves, and the ones that might take the coin further up are the ones that investors and traders are interested in, the most.

So, what will happen to DASH in the future? To know that, we must first analyze its past.

How did DASH do until now?

Dash can hardly be described as a young coin since it was launched all the way back in 2014. However, back then, a lot of people believed that Bitcoin transactions are completely private and that there is no need for a coin focused on privacy. This changed in 2017 when more people started entering the crypto industry due to increasing prices.

Soon enough, everyone realized that Bitcoin is not at all anonymous, but pseudonymous, at best. This allowed Dash and other privacy coins to shine, as privacy seekers started using them in greater numbers. From its launch in 2014, until early 2017, Dash's price has been on a constant rise, although the rise was nothing spectacular. The coin took 3 years to grow from $0.4 to $10, which is quite a long time. 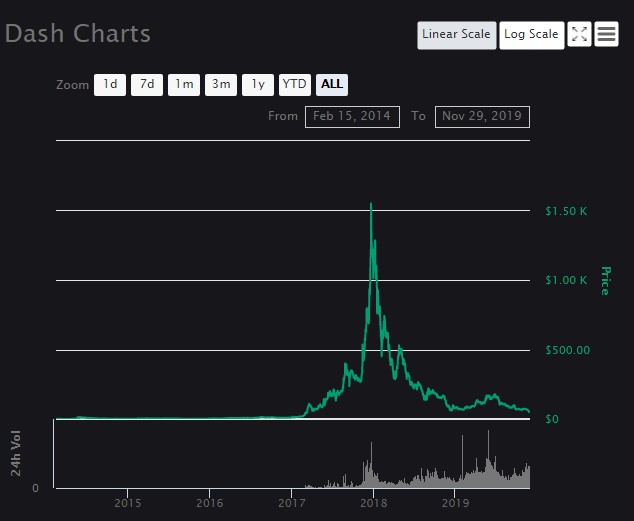 However, in 2017, the situation started changing, and DASH surged from $10 to $400. As it approached a resistance at $500, it started losing its momentum, and it suffered a minor correction that took it down to $280. However, that's when the Bitcoin-led bull run took over, and DASH surged once more, this time to over $1,550 per coin.

As everyone likely knows at this point, the bull run had ended just as abruptly as it began, and the coin took a major nosedive down to $500, and then to $285, after the support at $500 broke.

In April/May 2018, the coin experienced another surge, once again reaching $500. Unfortunately, this did not last, and Dash has been dropping until the end of the year.

Then, as 2019 started taking off, so did the coin, with its price surging from $80 to $184, which is its highest point in 2019. This happened in late June, and once again, as the bull run ended, DASH started another series of drops, each of which was briefly stopped by a support level, only to result in breaking that support and continuing the drop, which leads us to its current price of only $54.

What is next for DASH?

Dash's moves are not very surprising, and they can easily be explained by real-world events that took place over the course of the last two or three years. As the crypto community started attracting new members, transaction tracking revealed to people that BTC is no longer anonymous. As a result, people turned to privacy coins, and so Dash gained popularity.

It surged for as long as BTC itself did. Then, it started dropping alongside other cryptos, but in the meantime, crypto exchanges were discouraged from listing privacy coins by regulators around the world. As a result, DASH and other privacy cryptos started getting delisted rather quickly, which also contributed to the coins' drop.

The coins can still be found and purchased, although their availability is nowhere near where it used to be. New surges encouraged investors to start using DASH again, but the corrections once again convinced them that privacy coins are not going to get a pass by the regulator.

In the end, DASH has an ability to grow when times are good for the crypto industry, as it has strong use cases. But, the coin will always sink rapidly when times are tough, as traders tend to look for liquidity, stability, and availability, rather than privacy.