What awaits Dash in the future?

As one of the largest privacy coins, Dash (DASH) has always attracted the attention of investors and users alike. Not only that but during its all-time high, the coin's price even managed to go way beyond $1,500, which shows incredible potential for this cryptocurrency, especially when comparing this success to its price right now.

Of course, many are more than interested to learn what will happen to Dash in the future, and whether or not it can reach its former heights once again.

As you may know, Dash is one of the older coins in the crypto space. In fact, its launch predates that of Ethereum by about a year. After its launch in mid-2014, Dash took almost three years to reach the price of $10. At that point, it got caught up in the bull run of 2017, which granted it a sharp rise to $1,500, as mentioned before.

The 'glory days' did not last for long, however, and as soon as the market crashed, Dash went down with it. As many might remember, April and May of 2018 were marked by a strong recovery that led many investors to believe that the bear market was over. As we know now, that was not the case, but most people in the crypto space believed that it was true. 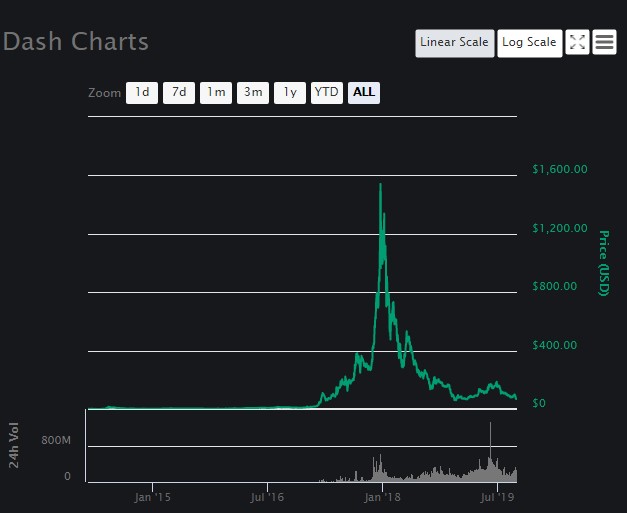 A lot of altcoins started seeing gains, some of them even going halfway back towards their previous ATHs. In Dash's case, however, this short period of growth is only a small bump on the road, and the coin kept dropping even deeper after that. By the time November 2018 came around, Dash was already sinking deeper and deeper on the list of largest cryptos, and its price kept dropping, eventually spiraling down to $60 in early December.

This was the lowest Dash has been in almost two years at that point, and things did not look good for it. Then came 2019.

The first thing to note is that Dash entered 2019 with its price sitting above these lows, after seeing a small surge in December. It entered the new year with a price of around $80, but this level did not stick, and Dash started to drop as soon as 2019 had arrived.

This situation continued until early February when the price finally started moving up. In the next two months, Dash has been struggling to overcome small resistances, but by the time early April had arrived — it managed to breach the resistance at $120 thanks to a bull run led by BTC.

It kept growing — not without struggling along the way — until it reached $177 on June 25th, but after that — the correction took place, and Dash kept dropping over the summer, until it dropped right back down to $60, which is where it sits right now, with a current price of $67.77 and a 4.04% drop in the last 24 hours.

What awaits Dash in the future?

It is difficult to predict the future of Dash accurately, even more so than of other altcoins. As a privacy coin, Dash is not a favorite of governments, which is why it is hard to find on many regulated exchanges. This decreases its exposure and reduces its trading pairs and opportunities. People are still using it, obviously, otherwise, it wouldn't be among the top 20 largest coins.

It also allowed everyone to see its potential during the bull run of 2017. However, Dash doesn't seem to be doing so well under prolonged bearish conditions. It does not take opportunities but rather follows the current trend, meaning that it will always depend on what is going on in the market, instead of following its own path.

Bitcoin Cash is one of the most widely known forks of the original Bitcoin blockchain there is. The cryptocurrency came about from a frustration in the way Bitcoin...

In our previous BAT price prediction article, we warned about the approaching correction that must take the price down by at least 20% in two weeks. That is precisely...

It’s dark time now for the hard fork of Ethereum as this altcoin has suffered the third 51% attack in a span of a few months. In our last ETC price prediction article...

In our previous Dogecoin (DOGE) price prediction article, we described the artificial bull rally organized by Tick Tock users who tried to pump the price to $10 in a classic...

The cryptocurrency industry is a wild world where just about anything goes. New projects are popping up nearly each and every day, with the majority of them set on building...

Neo (NEO) is one of those altcoins that have dealt reasonably well with the recent price dump since it has already made a bullish reversal, which is seen clearly...

Synthetix Network (SNX) has long been considered one of the heavyweights in the rapidly rising sector of decentralized finance (DeFi), alongside such names as Aave...

In the cryptocurrency space there is a lot of room for run of the mill digital assets like Bitcoin, but there is also a growing space for coins and protocols intended to advance...