In 2019, Waves was a coin that behaved very differently from the rest of the market, which should be taken into consideration when planning your trading tactics with this particular cryptocurrency. Whereas the entire market had been engaged in a minor bullish trend that took place last year from May until mid-August, WAVES had actually been consolidating after its own bull run, which began much earlier, in November 2018, and driven the price from the bottom of $1.08 to the yearly high of $3.62 in less than a month. 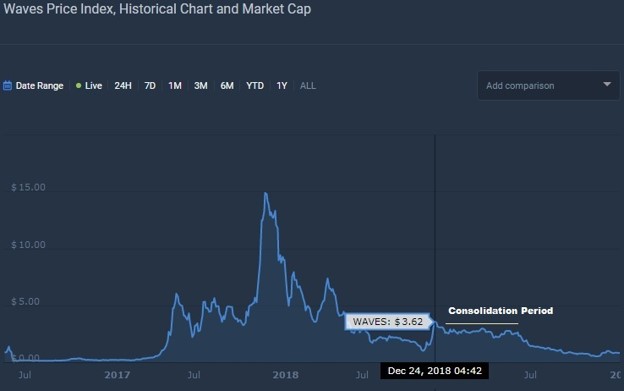 But when in 2019 the market went into a correction phase, Waves decided to follow its suit, which led to it sliding down from $2,68 all the way to $0.54 in six months. The downtrend was interrupted in mid-December when the coin had bottomed out at $0.53 and initiated a bullish rally. The presumably first phase of the rally ended with WAVES increasing in value by 50% and reaching $1.06, after which the price formed a triple top pattern and plunged to $0.81 and entered a correction mode.

Below you can see the comparison chart of the price action of Waves and Bitcoin over the period of the last 90 days - it’s clear that the correlation between these two cryptocurrencies, and the crypto market in general, barely exceeds 80%. 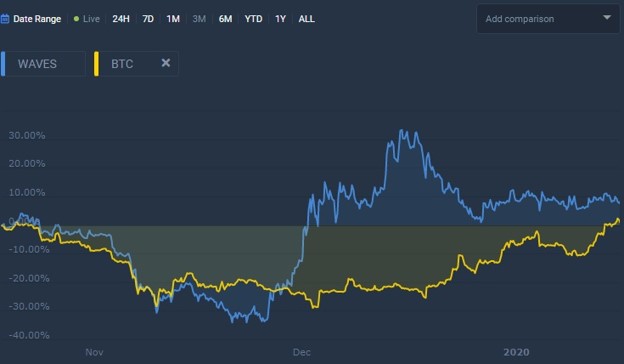 Therefore, when it comes to WAVES, it is advisable to develop a separate trading strategy without relying heavily on the price movements of Bitcoin.

Such discrepancies in the price movement of WAVES and BTC could be perceived as a good opportunity for profit-making. Indeed, in the last two months, we saw significant price movements in the WAVES/BTC market, the first of which began on December 10, 2019, with an inverted hammer candlestick pattern, which has always been characterized as a reliable signal of a potential reversal. 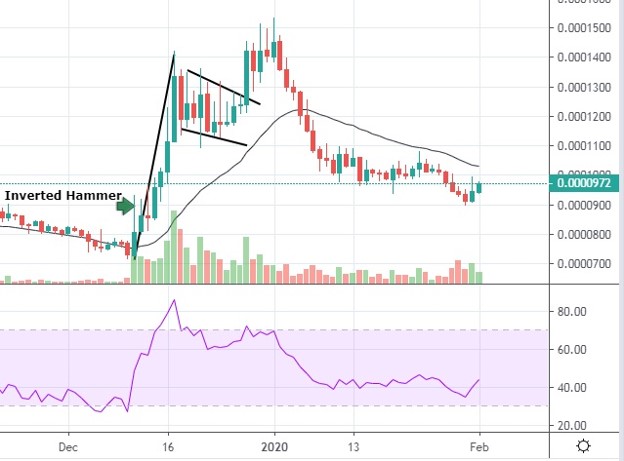 This time around, the signal had worked out perfectly as the price took off like a SpaceX shuttle, having gone from the bottom of 7,170 satoshis to the interim high of 14,130 sats in six green daily candles, with only one day of bearish initiative. Thus was formed a bullish flag that was later breached to the upside, in a move that turned out to be sour for traders who went long on WAVES.

Right now, the market is plummeting with the bulls being completely overrun, not being able to perform even a slight price bounce. The most probable scenario here involves WAVES sliding down to the area between 8000 and 9000 satoshis and beginning to consolidate. A breach of resistance at 11,000 sats could mean the cancellation of that scenario.

The situation on the WAVES/USDT market is not so dire as the BTC one, but it’s still nothing to boast about. 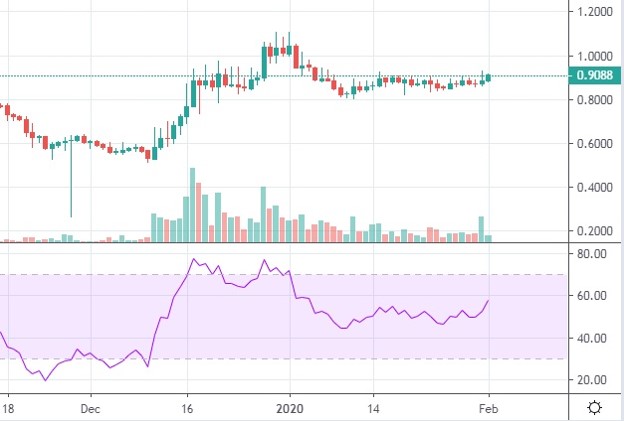 After a decent price rally, which took the coin from the bottom of the downtrend at $0.53 up above $1, the price has retraced by approximately 15% and entered a prolonged correction phase. The price is currently swimming beside the 50-period moving average, while the RSI is at around 55, which means that the market is still indecisive. All that is left to do now is to monitor the price and avoid setting the stop-losses too tightly.