Verge (XVG): A Naughty Cause for Price Increase

Verge (XVG) is the type of cryptocurrency, the price action of which would probably be most appreciated by traders who give preference to the less volatile yet reasonably profitable cryptocurrencies that are easier to predict and build the corresponding strategy upon.

It doesn’t mean that XVG lacks up or downswings, but perhaps its most distinctive characteristic lies in the fact that every significant move to either side is always followed by a period of calm and steady recovery or correction, thus providing enough opportunities for a well-elaborated and controlled trading.

We have already briefly covered the essence of Verge fundamentals and arrived at the conclusion that the anonymity it provides, thanks to the utilization of the l2P network layer are great in themselves, and they definitely serve as a superb foundation for the price growth, especially in the situation where the authorities are making efforts to harass the user privacy on the pretense of the COVID-19 threat. With anonymity and privacy becoming in greater demand, the coins that have these solutions at their core should thrive, or at least display a steady price appreciation, just like Verge has been doing since the infamous March market crash. 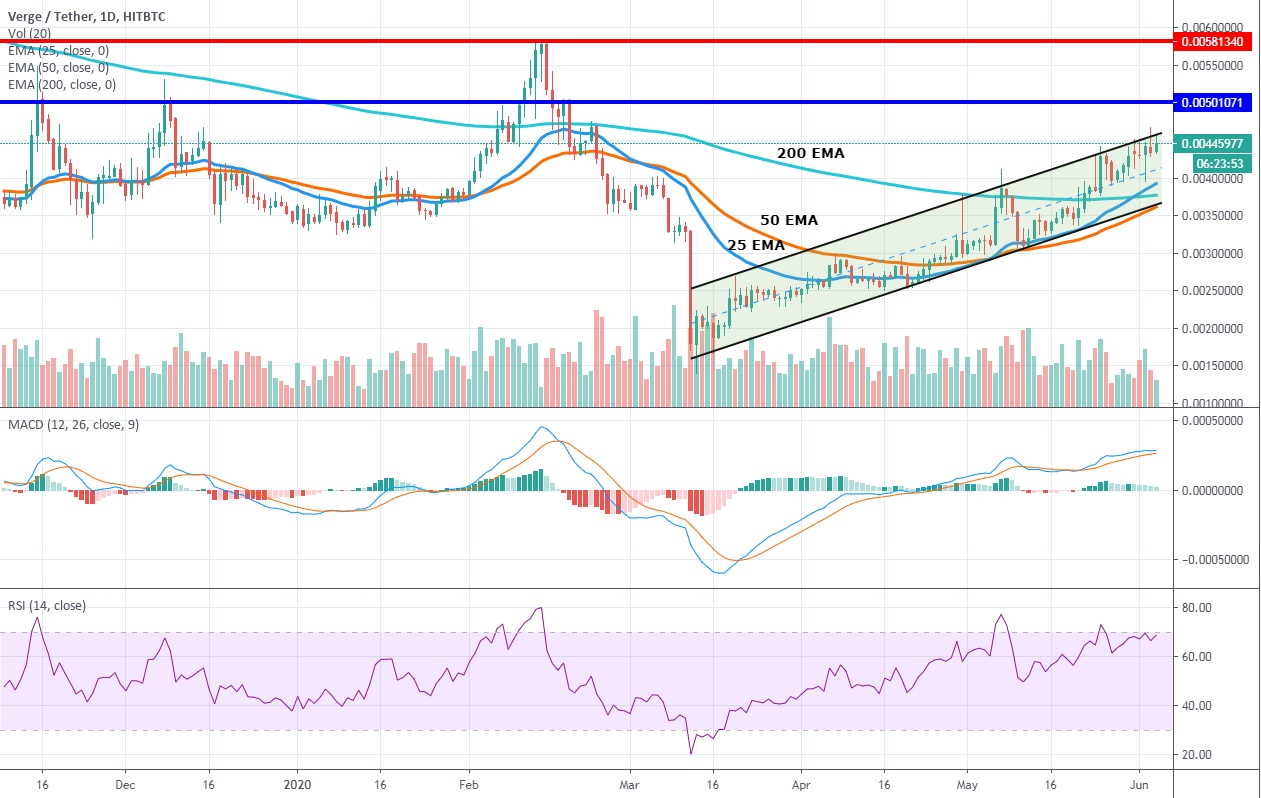 Starting from March 13, the day when the XVG market had reached the three-year bottom, the price of the 82nd cryptocurrency has been scrambling its way to the upside in one of the most accurate ascending channels that we have seen throughout the entire market during this particular cycle. Without trying to come up as obscene, but Verge’s recent success in terms of price action, and its relatively swift recovery following the crash, could be explained by the fact that this cryptocurrency has become favored by major adult sites, such as Pornhub that listed VGX (and USDT) as accepted means for buying memberships. Since the introduction of the global lockdown, the worldwide traffic stats related to this adult website has been soaring, which could correlate to a certain extent with the price action of Verge.

That is certainly not a sole reason why XVG has been doing well lately - over the past 30 days, the coin gained 43% against USD, 30% against BTC, and 23% in comparison to ETH - as the Verge team is working on an Android update and the integration of the RSK smart contract. However, it still represents a powerful driver that could keep the coin within the bullish context for the time to come.

When it comes to the price action, Verge appears to be preparing the groundwork for a bull rally, judging from the way all crucial indicators are lining up. On May 23, XVG made its way above the 200-day EMA, with 25 EMA and 50 EMA following the suit. Moreover, we are currently witnessing the golden cross in the making as 50 EMA is about to cross 200 EMA to the upside. MACD is also increasingly bullish in this market but yet to reach the overbought level at 0.0005. RSI has been moving north in sync with the price, and the fact that it is still in the neutral zone below 70 suggests that the move above the resistance at $0.005 is imminent. The next price target would be $0.0058, the top of the previous rally, at which point the price might experience an increased pressure by the bears.