VeChain is actually one of few cryptocurrencies that didn’t participate actively in the latest bull rally, which commenced in mid-January. Moreover, the year 2019 hasn’t been very fruitful for this coin since it only had a mediocre 26% gains against the US Dollar, whereas its performance in comparison to the dominant cryptocurrencies had been bleak, to say the least: - 45% against Bitcoin and -7% versus Ethereum - an unsatisfactory result that might have taken this cryptocurrency off the radar of many traders. Nevertheless, VET still puts up a good average daily trading volume of $89,4 million, with the largest portion of trading activity taking place on two exchanges: BKEX and LATOKEN.

However, there is a reason why VeChain was placed among the top 50 cryptocurrencies on Coinmarketcap, which is its interesting ecosystem that tends to find practical applicability in the real-world economy. We’ll review the latest developments in that regard later in the article, but for now, let’s keep in mind that this factor could fuel the growth of the value of VET in 2020.

VET: more suitable for trading when paired with Bitcoin

The 6-month historical price chart shows that VeChain Thor is the kind of cryptocurrency that doesn’t always adhere to the general sentiment of the market, which is traditionally very sensitive to the movement of Bitcoin. Therefore, refrain from engaging in social trading or mimicking someone’s tactics if you consider working in the VET/USDT pair, because the majority of “gurus” are just following the trend set by BTC, whereas VeChain has proven to be running its own course. 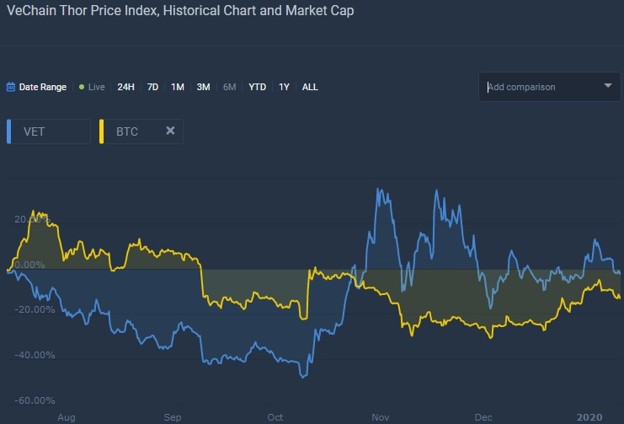 However, this also points to the fact that trading in the VET/BTC pair could be quite engaging and profitable, given that the trader is capable of foreseeing the behavior of the altcoin with sufficient accuracy. 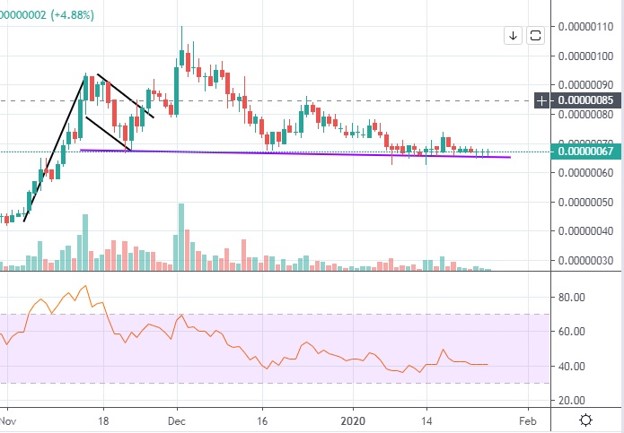 You can see on this daily chart how the price of VET took off at the beginning of last October when Bitcoin was being pushed down hard by the bears. The altcoin formed a classic bullish flag and then made another leap to 110 Satoshis while BTC kept on crashing. The 14-day RSI on that chart is currently close to the oversold region, a signal for a possible move to the previous rejection point at 100 Satoshis. Therefore, if you want to make something out of trading VeChain, consider doing it in the said pair.

On the daily VET/USDT chart, things don’t look overly promising, though the price seems to be holding to the support level at $0.005, which formed in November 2019. But the main cause for concern in the double top pattern, which is one of the most reliable bearish reversal indicators. 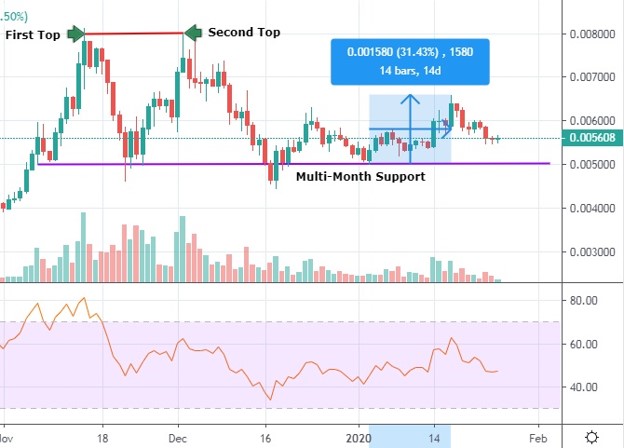 There’s still a chance for cancellation of the reversal if the price manages to rise to $0.0067, or even above $0.007, and entrench there. There is a relatively strong possibility for that scenario since the RSI is far from the overbought zone, and the price displays the intention to move above the 50-day moving average again.

Besides, the team behind VeChain partnered with the hotel chain HKCY Hotels and Ribbonz e-commerce platform, both of which will incorporate the VeChain Thor blockchain and its Jur protocol for smart contracts. These partnerships could also help drive the price of VET out of the bears’ claws. As for traders, setting stop-limits below the said support line is mandatory.