VeChain (VET): Preparing for the Final Push Before the All-Time High

VeChain (VET) is a proud participant of what can be dubbed as the altseason since it found itself in the company of the hardest gainers in the market after obtaining 307.2% against USD over the past three months. The reason behind such a major price appreciation lies in the role that VeChain plays in the space of decentralized finance (DeFi) that has literally exploded after the market crisis, induced by coronavirus, had subsided and the price of numerous altcoins, including VET, first recovered after the meltdown and then kept on striving to the upside. 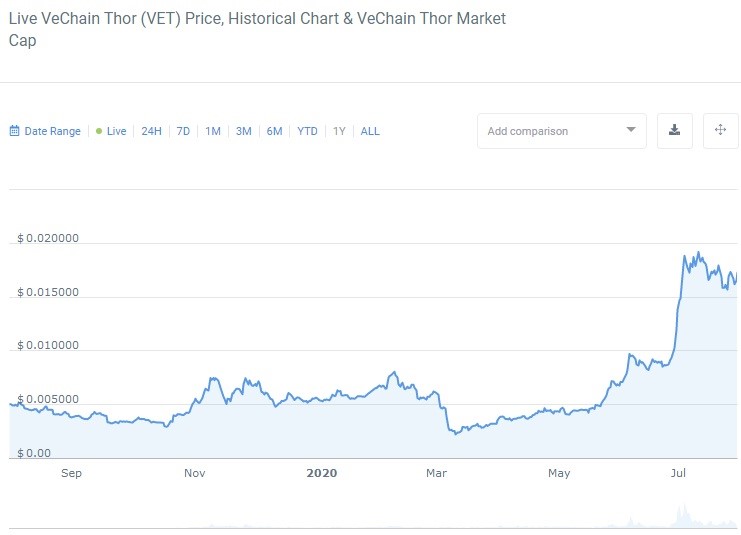 The effort on the part of the bulls was sufficient for the price action to make a transition to a full-blown secondary uptrend. The month of July was especially fruitful for VeChain as its value had leapfrogged from the support at $0.008 all the way to $0.021 (touched by the upper wick) in as little as two weeks.

Presently, VET is priced at $0,0182, formed on the back of the 16% price increase over the past two days, although the price action currently finds itself in a rather tight range that began to take shape after the rejection near $0.02. Thanks to the recent bullish period, the total market capitalization of the VeChain Thor project has increased two-fold in a span of a month, having gone from $500 million at the end of June to the present $1,017 billion. The average trading volume in the past 90 days remained virtually unchanged as it fluctuated between $200 million and $400 million, with Binance accommodating most of the trading action - 30% of all activities related to VET take place on that platform. This fact allows for the conclusion that VeChain boasts a stable interest from market participants, which eliminates the concern regarding the artificial nature of the ongoing uptrend.

VeChain prepares for the attempt to surpass the all-time high

It is important to monitor the developments in the VeChain market even if you don't have a position there, because the price is now only 33% away from the all-time high at $0.027, a gap that could easily be eliminated within next month, given that VET maintains the bullish momentum. The practice shows that once the all-time high is reached and surpassed, the sky's the limit for the digital asset. It means that we may well see VeChain heading for $0.05 or even $0.1, depending on how aggressively the bears would be trying to stem the bullish tide. 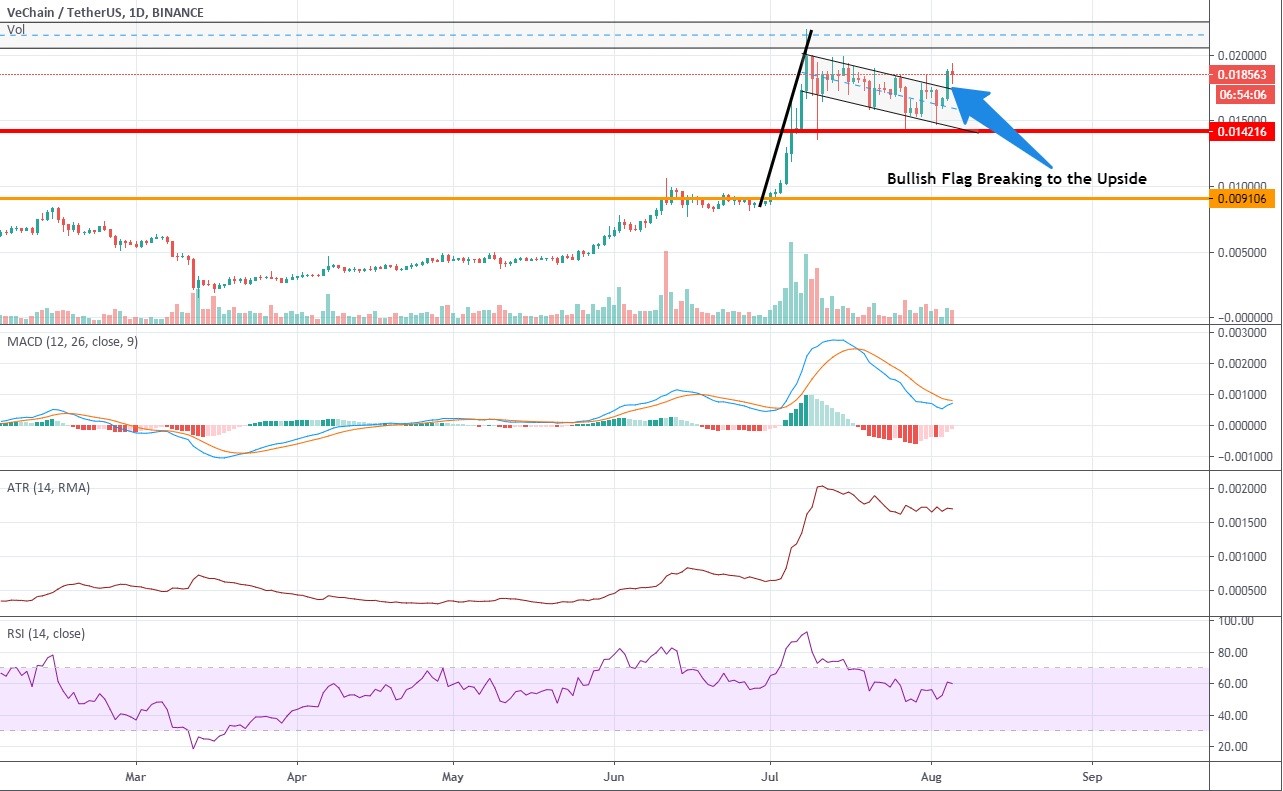 The weekly time frame lets us determine the most important spots of price interaction on the macro level, which are $0.0091 - the ultimate support, reaching which would mean that the uptrend structure is under immense threat. $0.0142 is the acting support, sticking to which is crucial for maintaining the bullish momentum. The level at $0.0205 marks the entrance to the major resistance zone that is basically the last strong barrier on the road to the all-time high at $0.027.

Given the fact that VeChain is already breaking the bullish flag formation to the upside, we predict that VET will rise above $0.02 over the coming week and establish a new higher high above $0.0225. Should the bullish sentiment continue to prevail, VET will test the all-time high over the course of the next month.