If you want to trade the coin that is characterized by large upswings and almost equally deep retracement that affords plenty of profit-taking opportunities, then VeChain is definitely not your cup of tea.

Lately, VET has transformed into the type of coin that we call a 'calm glider,' which is characterized by nearly a total absence of crazy price swings, plenty of spinning top candlestick patterns, and checkmate formations. That is what VeChain has been about recently, a tortoise-like move to the upside, which resulted in a mere 14% gain against USD over the last 30 days.

In the yearly time frame, though, VET has a negative 38% against USD and -45% against BTC, which tells a lot about its behavior on the macro level, which is, obviously, bearish.

However, if you are adventurous enough to go long on VET at this particular point in time, do know that this currency has a soft spot for the price level at $0.0074 with which it had interacted more than ten times in the last eighteen months. So, if you want to set a price target for a long play right now, that would surely be a highly probable point of rejection and profit-taking. But before VeChain hits that resistance, it would have to jump through plenty of hoops, so for now, we will concentrate on the ongoing price action and the VET price prediction for the near future.

Ranging with the triple top threat

VeChain did a good job of getting straight to restoring its value after the coronavirus crash. Slowly but methodically, the price had been traveling north above the 0.236 Fibonacci retracement level and the 50-period EMA, which appears to be a point of attraction for the price of VET at this juncture. 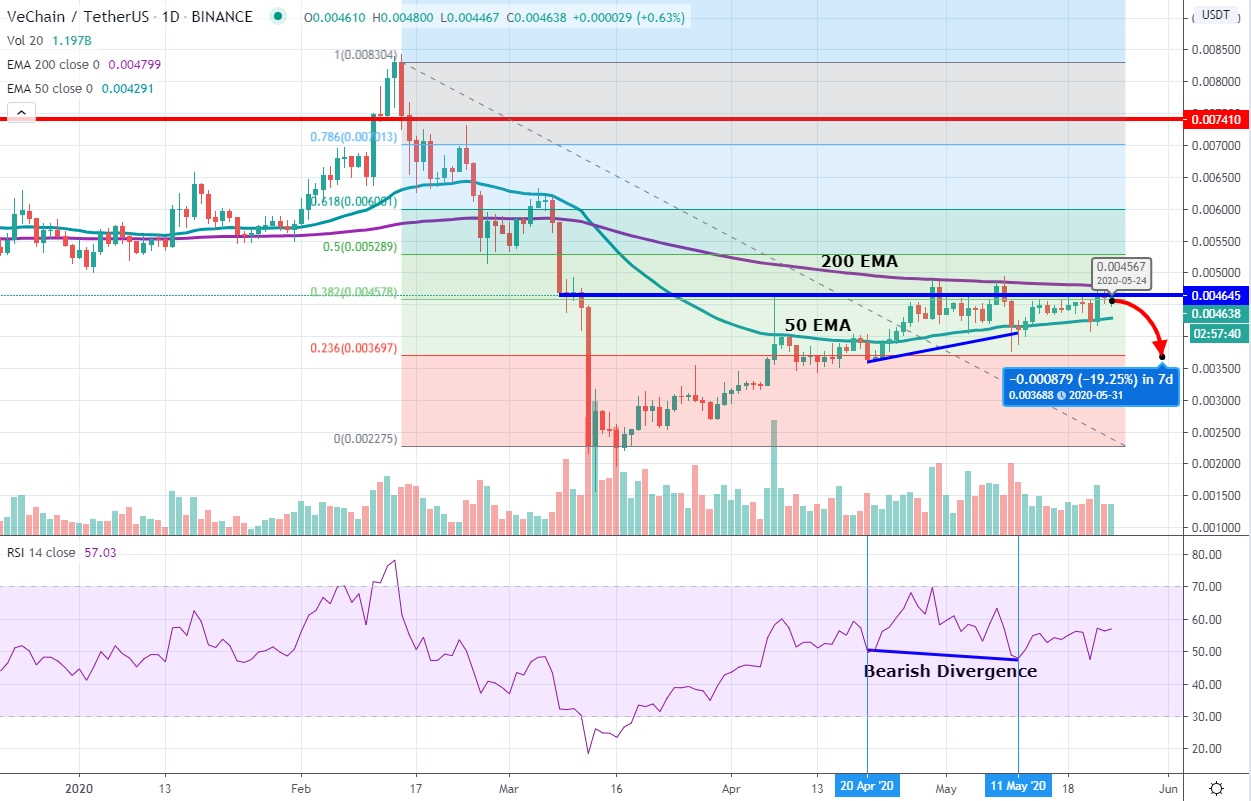 Unfortunately for the bullishly-minded traders, VeChain hadn't had enough vigor to make a step further and leave behind the 0.382 on Fibo, as well as the 200-period EMA, which converged with the pre-crash resistance level at $0.0047 to form an impassable barrier. The daily chart shows how the price impaled that resistance twice, but to no avail, and is now gearing up for the third attempt that could also be unsuccessful. In that case, traders would witness the triple top formation's emergence, a reliable bearish trend reversal signal.

But while that formation is still in the making, there is the one that has already formed, a bearish divergence on the 14-period RSI between April 20 and May 11. This divergence could play a significant role in the forthcoming price action of VET. Presently, we see that the price is being led into a tightening channel between the two EMAs or the ascending triangle formation. Even though the ascending triangle is widely regarded as a continuation pattern, in that case, it could exercise the role of the reversal one, instigated by the divergence. In addition, the volume analysis shows that the bears have been more active in the past month, gaining strength for a major pushback.

All these factors: the divergence, the triple top threat, and the bearish volume, suggest that VeChain is about to experience a tangible price depreciation of 19% or more in a move that would push the price back to 0.236 on Fibo.