TrueChain: the Coin That Has Already Recovered

While all top cryptocurrencies are only making attempts at recovery after the sudden collapse - but to no avail - there is a coin that lies on the wrong side of the top 100 on Coinmarketcap that had already accomplished this task, and presently tries to establish support in the area from which the downfall of March 12 commenced. 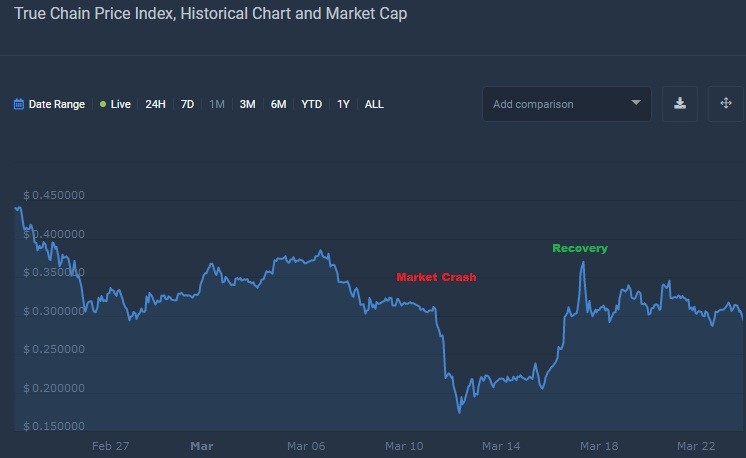 A brief overview of TRUE

This currency is named TrueChain (TRUE) - right now, it occupies the 116th spot in global ranks with the market capitalization of $23.2 million, which is typical for the cryptocurrencies of similar stature. But what sets this coin apart from its closest neighbors, namely Crypterium, Aragon, and AION, is an uncharacteristically large average daily trading volume of $44 million, which even goes up to $56 million on certain days. That is probably one of the reasons why the coin has made a truly remarkable recovery after it had gone under all levels of support on March 13, along with the rest of the market.

We'll make an overview of that heroic act shortly, but first, let's have a quick look at TrueChain's fundamentals because, with that kind of performance, it could gain much larger traction in the coming months, especially if it manages to maintain the current price level or even initiate an uptrend.

Built by the Singapore-based blockchain company on the basis of Binance Chain, and launched in January 2018, this system serves as a foundation for the digital infrastructure for dApps. Its uniqueness lies in the use of an innovative consensus algorithm that comes as a hybrid of fPoW and DPoS, as well as a sharding technology. The employment of these solutions allowed the developers to claim that they had resolved the so-called impossible triangle - the combination of issues concerning scalability, consistency, and decentralization.

TRUE can be labeled as the most successful underdog in the cryptocurrency realm - the coin rarely gets any attention from the leading news outlets and analytics; nevertheless, it has performed a virtually impossible feat, recovering after an ultra-swift 50% price fall in a matter of seven days, thus giving its holders a massive relief, whereas the holders of top coins shouldn't even hope for such a rehabilitation any time soon. 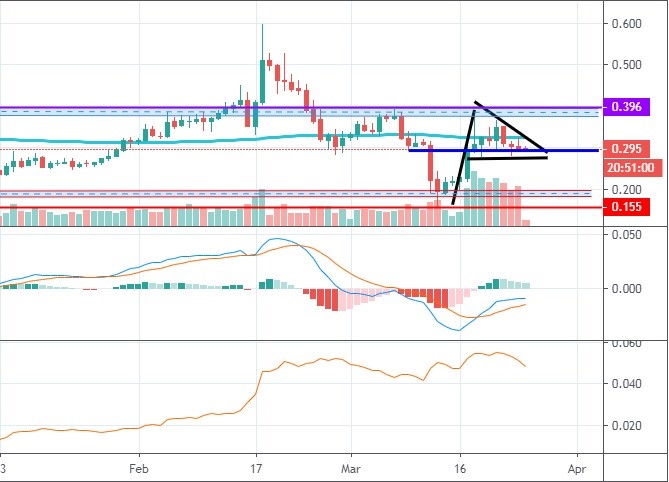 Perhaps one of the reasons why TrueCoin has achieved such an amazing feat lies in the fact that nearly 80% of all trading activities involving this coin occurs on a single cryptocurrency exchange platform - OKEx,  which gives ground for the suspicion that even a single whale could potentially influence the market in his favor.

But conspiracy theories aside, TRUE had made a spectacular leap from all-time low at $0.15 to the resistance zone that formed prior to the collapse at $0.39. This move was a part of the formation of a bullish flag on the background of an immensely strong buying volume, unseen in other cryptocurrencies.

Now, TrueChain is at the critical juncture because it has come extremely close to the 200-period EMA, breaching which would signal about the commencement of an uptrend. The ATR oscillator is at 0.0047, hinting at the potential strength of a new move, which should occur within the range of $0.19 - $0.36, but not in a single swing. However, MACD is not overly eager to cross the zero area; therefore, the highest probability with regard to TrueChain is that during the next week, it would consolidate around the 200 EMA.