Despite the hype and the seemingly non-stop publicity stunts, courtesy of Justin Sun, the mastermind behind the TRON Foundation and the CEO of BitTorrent, the eponymous cryptocurrency had nothing to boast about in 2019. The self-proclaimed "Ethereum killer" finished the year in the red, showing a -33% price decrease on the 1-year chart. Its archrival also wasn't overly impressive, as ETH had diminished the portfolio value of its holders by - 11.17%, as of the time of writing. As you can see on the chart below, both cryptocurrencies had almost mimicked each other's price movement for the entire duration of 2019, with the exception of the winter months, when TRX was having a couple of upward impulses while ETH was trying to find the bottom. 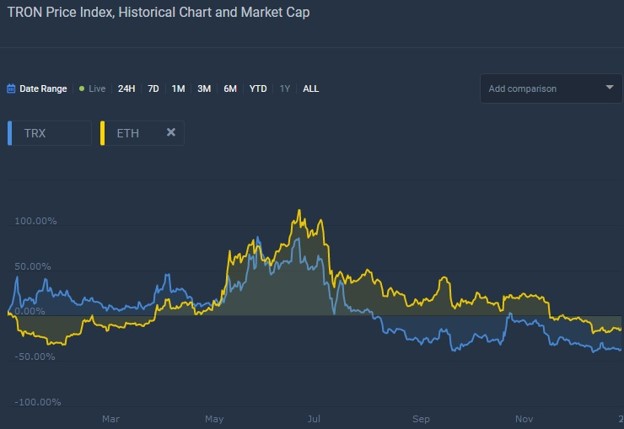 The situation looks even more amusing when looking at the comparative chart that depicts the price movement of Tron and Ethereum since the first days of 2020. 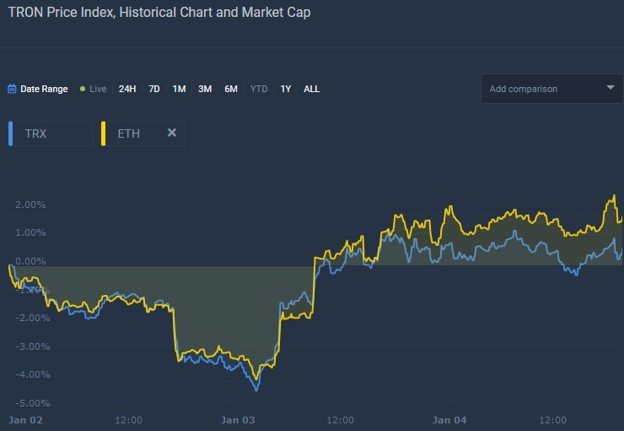 TRX appears to follow the movement of its nemesis almost to the letter, especially at the time of recent short-lived dip, which occurred on January 2 and was followed by an equally strong recovery. The 1-month chart displays the same scenario, apart from a time on December 22-23, when Tron has had a brief explosion of price, having gained, and subsequently lost, around 5% in its value. This rather interesting parallelism might seed an idea in the heads of the devoted Ethereum traders that it could be a good time to supplement the portfolio with Tron since there wouldn't be any necessity to elaborate on some different trading tactics for the 11th-ranked cryptocurrency.

But those who are not particularly fond of ETH must analyze the price action of TRX separately and stick to the tactic that is best-suited for their trading goals.

Although it is still hard to entirely rely on historical data, because the cryptocurrency market is at a nascent stage of development, it is always advisable to take it into consideration when compiling the short-to-midterm trading playbook. You can see for yourselves that January has traditionally been a fruitful month for TRX as it gained double figures in both 2018 and 2019.

Needless to say that there is no better way of forecasting the price of a cryptocurrency than by analyzing the charts and specific technical indicators. The daily chart of TRX/USDT shows that the coin still can't get out of the grip of the bears, as it had been in the downtrend phase for a better half of the previous year. 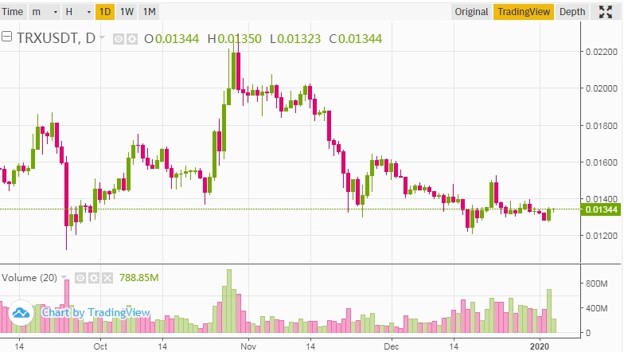 Now, however, the coin appears to be testing the support level at $0.012, which it had already touched back in September of 2019. Although, there are no clear patterns that would hint at the approaching trend reversal. Therefore, it is most likely that Tron will keep on consolidating for some time, though, as you can see, the trading volume tends to increase, compared to the end of last year, which is always a good sign. 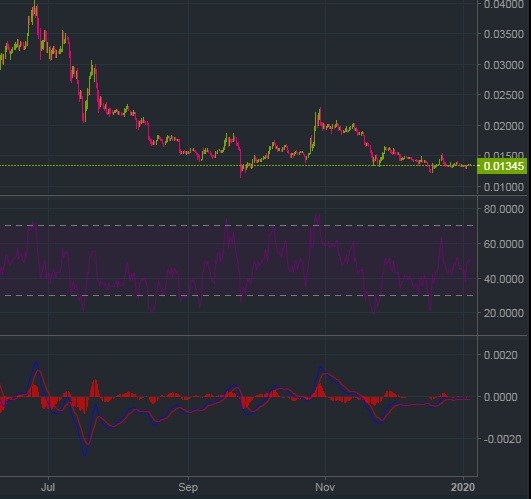 The 14-day RSI indicator shows TRX stuck somewhere between the overbought-oversold condition, which supports the notion of further consolidation. MACD also appears to be in favor of neutral price action, with a little hint at the minimal gains. Therefore, Tron shouldn't make any rash movements in the following few days/weeks, which could be a good time to accumulate some TRX or engage in scalping.