TRON (TRX) is one of the top coins when it comes to its trading volume, but as far as its market cap goes, the coin has dropped down the list by several spots recently. At the time of writing, it sits as the 13th largest cryptocurrency, with a market cap of $929.22 million. Meanwhile, its trading volume exceeds $1.01 billion, making it one of the most traded coins.

The explanation for this is simple — TRON's ecosystem is now rich with dApps, especially ones concerning gambling. As such, the coins are flowing with a daily volume of over a billion, while the coin continues to sink as its price and market cap drop in an uncertain market.

The history of TRON

As many likely remember, TRON started out as an ERC-20 token on Ethereum's network back in mid-September 2017. It emerged just in time to experience the full strength of the upcoming bull run that took BTC to $20,000 per coin. Meanwhile, TRX itself surged from $0.002144 to $0.22. While this does not seem like much, it was the height that TRX only achieved once, and it never even came close to it for the second time.

The coin's price dropped soon after the crypto winter kicked in in early 2018, and it initially went down to around $0.028. This level acted as a very strong support until early April 2018, when the coin joined another bull run, this time reaching $0.09. The bull run was believed by many to be the end of the crypto winter, and people expected the coins to grow back to their former levels.

Of course, as we know now, nothing like that ever came to pass, and this was only a small period of recovery after a sharp drop in late January.

After the recovery ended, TRX started sinking back down, until it found its strongest resistance at $0,02. This level held on for a good part of the previous year, as well as for half of 2019.

However, while TRX did not experience a lot of positive movement in terms of price, the project's own advancements were nothing short of impressive at the time. Thanks to its CEO, Justin Sun, and his development team, TRX made some quite amazing achievements during the worst period in crypto history.

It launched its own blockchain, migrated its tokens, it started launching dApps, smart contracts, a DEX, and it partnered up with so many exchanges that everyone started counting after a few weeks. Not to mention the fact that it purchased BitTorrent and created a new cryptocurrency (BTT) to serve as its native token.

Unfortunately, even all of these moves did not affect its price, and TRX could have been described as stable, at best. It still had minor oscillations, but this was a relatively peaceful period for its price.

In 2019, a lot of coins started climbing ever so slowly. Once April 1st came, Bitcoin started an unexpected surge, taking numerous coins with it, TRX included. This only lasted for a few months, however, and TRX resisted. It did not skyrocket nearly as strongly as the previous two times, in late December 2017 and late April 2018. This time, its growth was only a small one. However, it still sank quite a bit after the correction took place. 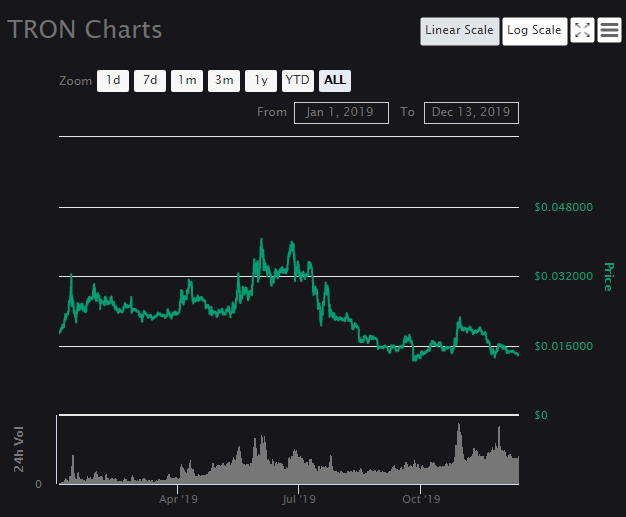 Since then, the coin attempted to establish its old stability, even though it broke the old support. Instead, it found a new one at $0.016, although this one does not appear to be strong enough to hold the coin above, and TRX finds itself above and below this level, depending on the market sentiment.

Where is TRON going from here?

TRON was historically immune to any positive news that surrounded the project, and most — if not all — of its movements came as part of the collective. It moves together with the market, which, in turn, follows Bitcoin's lead.

In other words, no matter what success the project achieves, TRX is not going anywhere without Bitcoin leading the way. For now, its price seems to be tied to $0.016 level, although it can easily start dropping once again in the near future.

On the positive side, TRX seems to be trying to achieve stability, meaning that drops should not be expected by default. TRX does not seem to do much on its own — it follows the market's lead when a trend arrives, and then just stays there with minor oscillations until the next one takes place. This might be good for long-term investors who plan to HODL, but as far as traders are concerned, the coin is quite a risky option.