Those who awaited a swift and spectacular recovery on the part of TRON (TRX) must have felt disappointed with the latest price action of the 17th cryptocurrency since its USD value got appreciated only by 7% during the previous months, whereas its BTC value had only a small 4% bump over the same period.

Despite these seemingly unimpressive showings, TRON keeps on stubbornly chugging to the upside, taking a relatively long time to make new higher highs. Still, eventually, the price makes 15% to 20% bullish sprints on a regular basis. However, it also tends to have deep retracements afterward, with the average price drop after the new higher high being around 12%.

The weekly time frame shows that TRON is at the crossroads at the moment as its price is yet to reveal its intentions with regard to the continuation of a minor uptrend that had been shaping up during the short-lived altseason in January. The structure of that uptrend had been broken brutally by the panic sale during the first global wave of the coronavirus pandemic, and for the last three months, TRX has been doing nothing but climbing steadily to the upside, having offered traders a chance to profit on two large price swings. 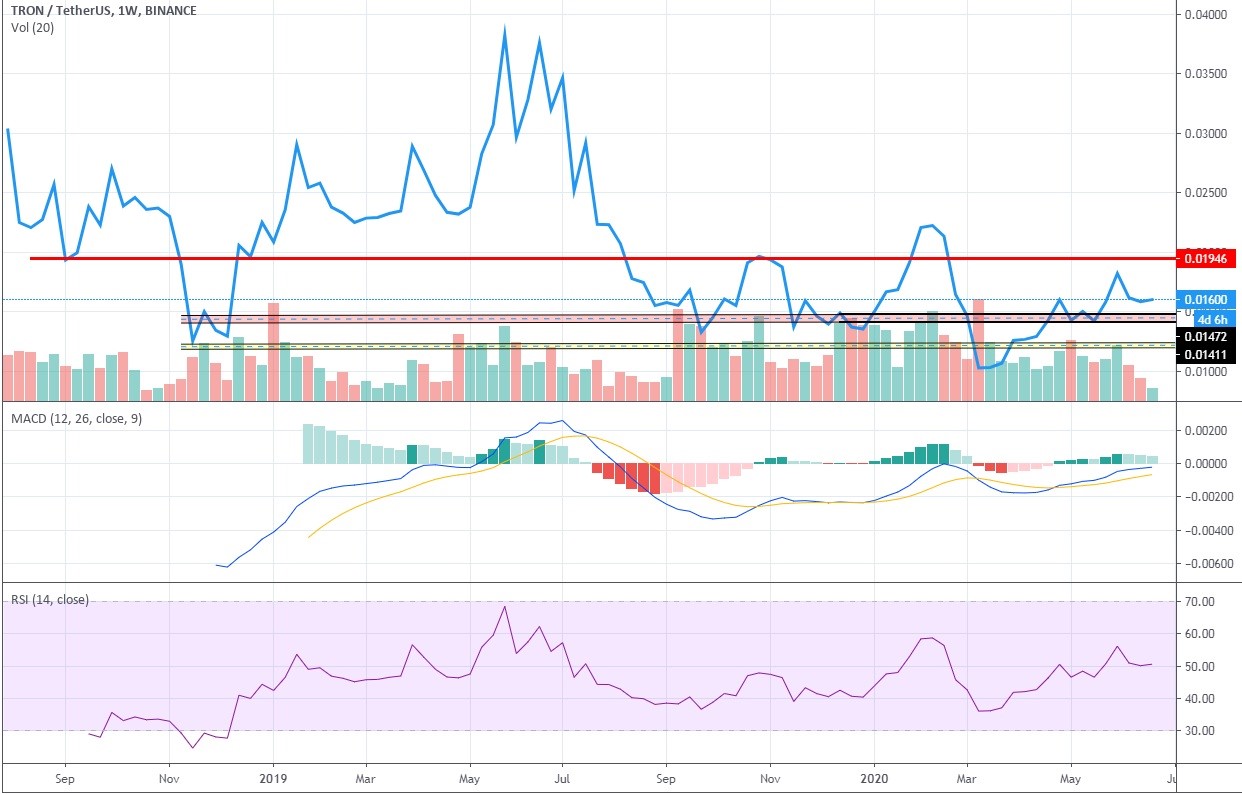 It appears that TRON is gearing up for another upswing on the weekly that could result in the 20% price increase during the next four to six weeks, and subsequent interaction with a formidable historical resistance at $0.0194 - $0.02. Both MACD and RSI confirm the underlying market bullishness. MACD still remains in the bearish zone below the zero line, raising above which should provide the bulls some extra acceleration. The last time this oscillator was bullish was back in 2019, during the previous secondary uptrend.

However, there has been a significant decrease in trading volume in the last four weeks, which undermines the overall bullish outlook with regard to TRON, although it is characteristic for this altcoin to have a gradual volume drop before the bull rally.

On the daily time frame, though, the situation seems to be having a bearish undertone since the indicators, the trading volume, and the price action itself suggest that TRX is likely to have another trip to the support area between $0.0141 and $0.0147. 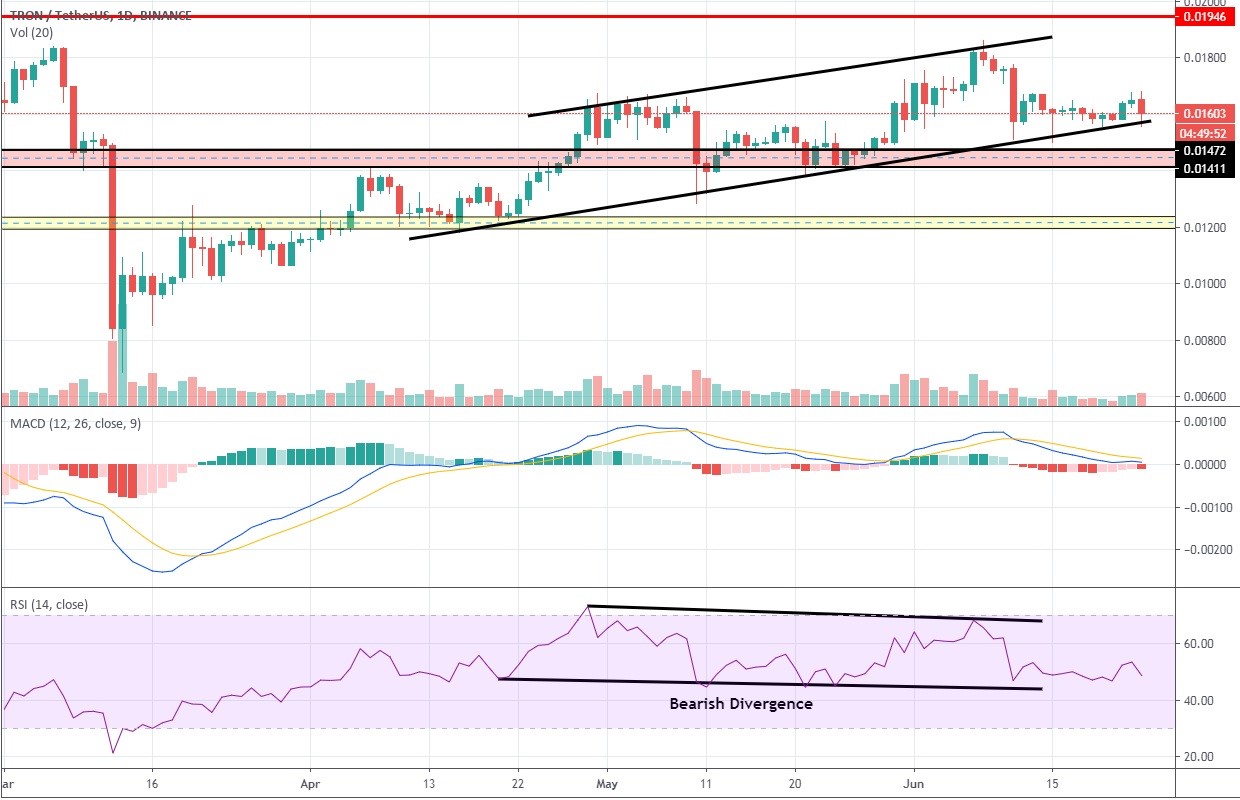 MACD is once again interacting with the zero line, thus confirming the current indecision in the market that could lead to a quick drop to the established support. RSI has dropped to the neutral zone around 50 without even entering the overbought region during the last upswing. However, there is a sign of bearish divergence on this time frame, which heightens the expectation of a quick 15% slump. Nevertheless, we suspect that this might be the setup for the bear trap that would allow the whale to stock up on TRX during a quick price drop. 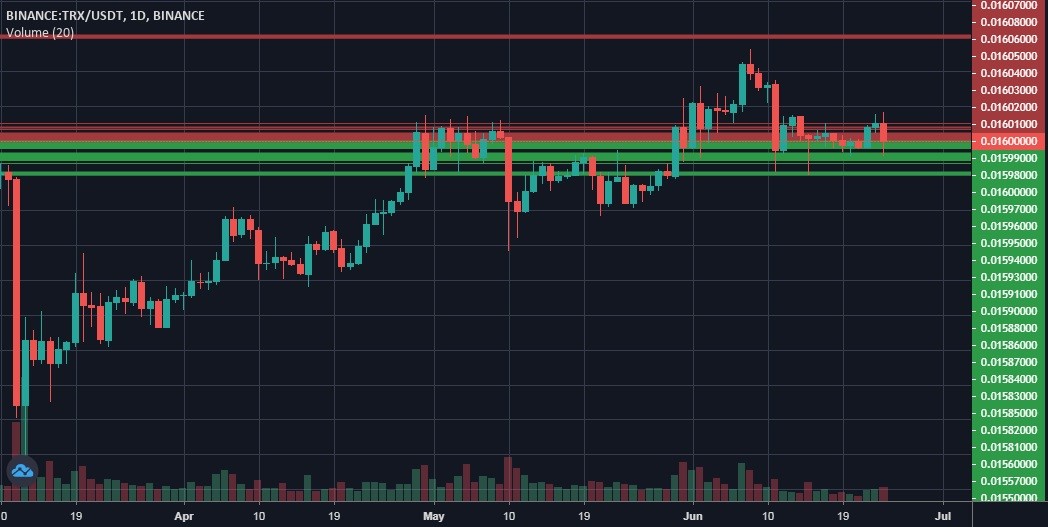 The order book analysis reveals a very tight spread between the large orders to buy and sell, which means that the price is likely to stall for a while before testing local support at $0.015, upon which it could shoot straight up to $0.019.