After months of inexpressive bullish price action, TRON (TRX) had performed a decisive break outside the boundaries of a huge descending triangle that had been forming for nearly a year.

A secondary uptrend could erupt after the breakout confirmation

Frankly speaking, TRX has become something of a surprise for many traders because of the intensity with which the price had taken on the macro resistance at $0.024, which we predicted to be the point of the breakout from the multi-month descending triangle formation.

On the weekly chart above, we see a textbook example of resistance conquest that came on the back of the rising bullish volume and the corresponding momentum, confirmed by MACD and RSI. Then TRON has had a traders’ remorse that only confirmed the new price level, upon which the price has literally exploded to the upside and reached $0.05, a 96% gain in a week, though it was immediately rejected back to $0.31, at which point, the September dump has occurred and dragged the price down by 20.2% against USD, 28.5% against BTC, and 24.8% in the ETH market.

TRON is perceived by many as a blockchain network that is rival to Ethereum in terms of its dApp developing properties, but TRX has been losing to ETH on all time scales: - 19% in a year and - 8.57% in the past 7 days, and clearly appears more bullish on the comparison chart below. 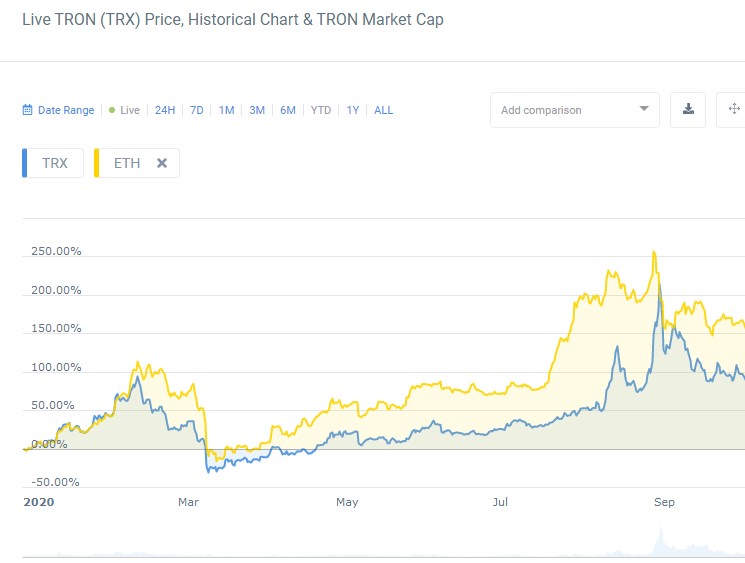 Here we see that the price has found a resilient support area at $0.025, as it has already tested it three times, which is more than enough to consider it the potential point of reversal, following weeks of selling pressure that drove TRX inside the symmetrical triangle, which is generally perceived as a bullish continuation pattern.

The showings of key indicators lead us to believe that TRX is going to break that symmetrical triangle to the upside in the next week or two.

All in all, TRON probably has one of the most bullish outlooks among the other altcoins from the top 20, along with Ethereum and Polkadot, so we fully expect it to go above $0.05 by the tail end of the year.