TRON (TRX) has been one of the most popular cryptocurrencies in 2018. The project definitely achieved much last year, and its achievements continued in early 2019, as well. Recently, however, it seemingly started losing its edge and sinking on the list of largest cryptocurrencies by market cap.

Earlier, it was among the top 10 cryptos, and only occasionally pushed out to the eleventh spot on the list. These days, on the other hand, it dropped all the way down to 15th spot, with its price threatening to reach lows that weren't seen even during the bear market of 2018.

When it was originally launched, TRON was nearly worthless, with its price being only a fraction of a cent. It was between $0.001 and $0.004 for the first few months following its launch in September 2017. However, in December 2017 and early January 2018, things changed quite sharply. 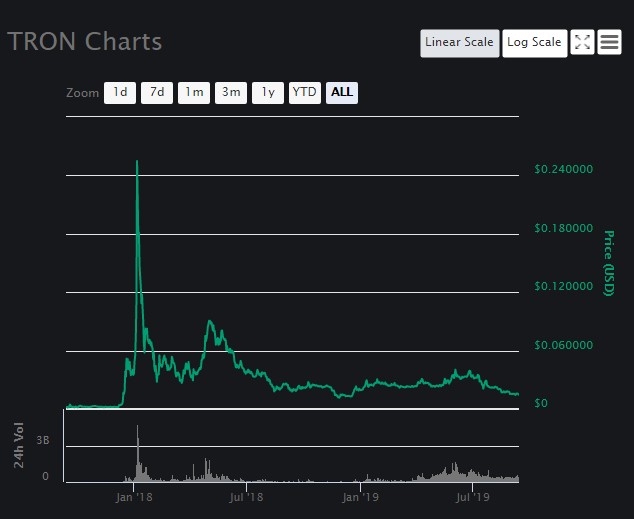 TRX price surged, and the coin went beyond $0.24. This was quite impressive for crypto with a total supply of nearly $100 billion coins. Of course, this did not last for very long, and TRX was soon back down, with its price mostly being $0.01 and $0,03, often going up and down between these two barriers. This situation continued throughout 2018, but TRON managed to stay afloat, mostly thanks to all of its technological advancement, new projects, constant partnership announcement, and of course — Justin Sun's hype-building abilities.

TRON managed to launch its own blockchain, its own DEX, announce several projects, and purchase BitTorrent, which led to its next major plan — to launch BitTorrent token (BTT) and use it to reward torrent users who participate in sharing content.

This was done too, in late January 2019, and it also marked the start of the IEO token sale model. After that, Binance publicly supported TRX and BTT, and for a time, it seemed like TRON is back on its way to the top 10 list and high price. 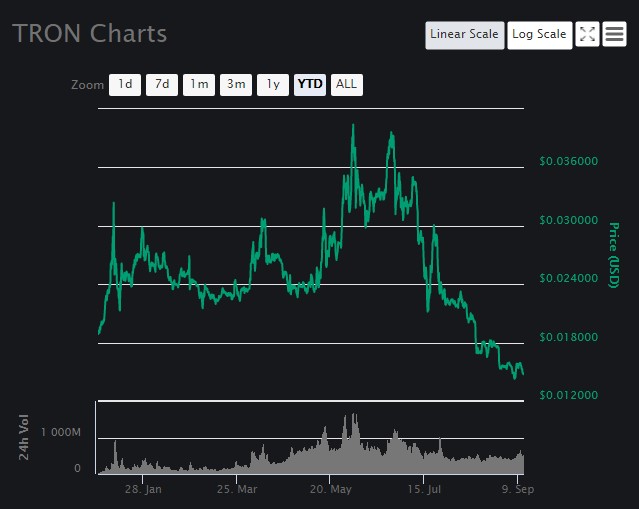 Even though TRON's ecosystem is quite well-established at this point, that its blockchain is fast, cheap, and great for developing dApps, smart contracts, and even new tokens — the coin itself does not seem to be having a particularly great time. It kept sliding down the list of largest cryptos, eventually being overtaken by Monero, Stellar, Cardano, UNUS SED LEO, and even Huobi Token. It is also the first coin on the list whose market cap is currently below $1 billion.

What will happen to TRON in the future?

While most other tokens are seeing drops in price right now, TRON seems to be taking the bearish part of 2019 particularly badly. This is, obviously, not the greatest time for the crypto market, although it is still better than in 2018. Even Bitcoin has trouble keeping its price at high levels.

But, while BTC price is still three times larger than it was at the beginning of the year, TRX has spiraled down, going below its price in January 2019. It is possible for it to make a comeback in the following months, especially if analysts are correct in predicting another major bull run.

However, if TRON keeps going the way it is going right now, chances are that it might just keep sinking and that it will never become the project is aimed to be. The future remains uncertain for TRON, even more so than for other cryptocurrencies, as investors seem to be losing interest in the coin. Whether or not this will change remains to be seen, but right now — TRX seems to be in a bad place, as far as its price is concerned.