In crypto space, there is probably nothing more entertaining than following the escapades of Justin Sun, the CEO of TRON and BitTorrent. The guy is like an eternal generator of hype and controversy.

In the latest developments, he became a center of heated arguments over what appears to be a hostile acquisition of Steemit, a company behind a rather popular blockchain-based social media platform, where your humble author began his acquaintance with cryptocurrencies. The management of such major cryptocurrency exchange platforms as Binance, Poloniex, and Huobi also got entangled in the scandal, which erupted between Sun and the members of the Steemit community, because they have allegedly participated in the takeover by voting with depositor’s funds.

The disgruntled Steemit users are trying to resist these cardinal changes, though the scandal has had a positive effect on the price of STEEM, the primary currency of the social media platform, whereas the value of TRON remained largely unaffected. 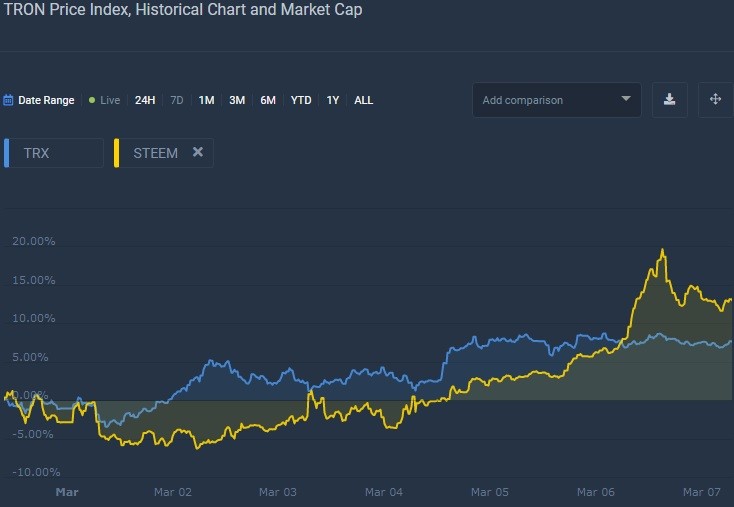 Comparative chart of TRON and STEEM

All controversies aside, TRON’s price action over the past couple of weeks has coincided with the correction that occurred throughout the market. The jolly bull rally of the year’s first months and a half had ended for TRX when it reached the peak at $0.026. The downward move began with a sizable bearish engulfing pattern. Interestingly enough, this pattern emerged only a couple of days after the corresponding moving averages formed a golden cross, which has set the majority of traders into a bullish mode. 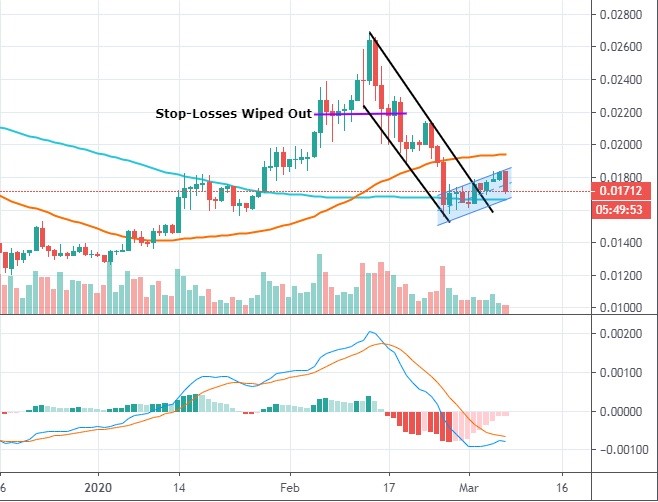 That should have been one of the reasons why this particular market had crashed so strongly after the first hint at trend reversal, as the move has wiped out a vast amount of stop-losses set by bullish traders at $0.022, the level of previous support. After that, the price has slid down below the 50-period moving average in a single bearish candle that formed on the back of an enormous selling volume, having once again proved that the bears have completely turned the tables and sent the entire market, including the TRX one, into a fear mode.

The avalanche-like price fall has been stopped only by the 200-period moving average, thus still providing hope for a market recovery, though the large daily candle that is forming on yet another red day could render these expectations obsolete, as it could be a part of a forming bearish flag pattern. The successful formation of this pattern would result in TRX dropping below the 200MA, thus confirming the fully-fledged downtrend. Should that be the case, TRON would probably find the next support at $0.014, thus nearly eliminating all gains from the recent rally. MACD is also heavily bearish on the daily time frame as both lines remain far below zero, refusing to form a crossover. 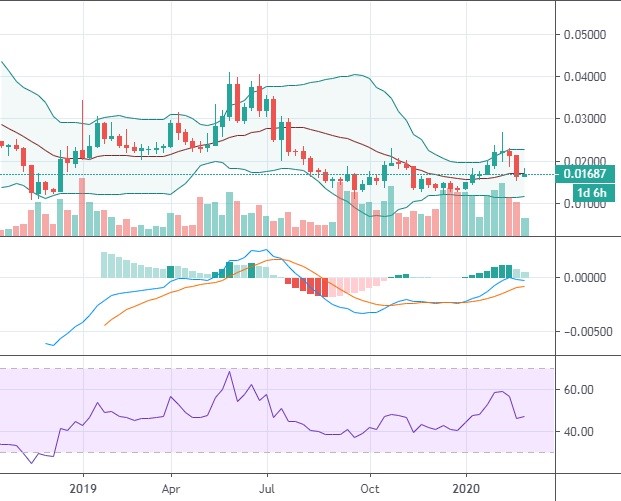 On the weekly time frame, the Bollinger Bands show that TRX still remains in the period of high volatility, so the abrupt move to its lower line, which currently flows at $0.011, is possible, though not inevitable because the MACD here still remain bullish, while the RSI is in the neutral area, thus giving TRON enough room for the dash to the upside. However, the overall situation regarding TRX remains bearish.

Tron Is Heading for a Range