Without a doubt, Tron is one of the most exciting cryptocurrencies to follow - not as much because of its price action, but mainly due to the high level of business and marketing activity, showcased by Tron Foundation and its CEO Justin Sun.

The saga of Steem acquisition and the subsequent standoff between the new board of executives and the former platform community, which went on to carry out a soft fork named Hive, deserves a separate article. In addition to that, Tron has recently partnered with the blockchain-enabled platform for video game streaming called Refereum, which awards players for their engagement in crypto.

Also, at the end of March, the company announced the launch of a platform for collateralized loans labeled Djed and an associated stablecoin, backed by TRX and BTT. As usual, the announcement has failed to go without a hitch as Twitter users began to muzzle Sun against the evident similarities between Djed and MakerDAO.

But all these seemingly positive events had zero influence on the price of Tron as the coin continued its lazy hike to the upside, without any considerable price spikes or drops.

Traders who deal with TRX know that this coin is not the best instrument for long-term strategies as it tends to put up relatively modest gains in the yearly and monthly framework. The 56% value depreciation in a year speaks for itself.

Tron might be a cryptocurrency with impressive fundamentals, developed by a competent and creative team, but price-wise, this coin is definitely an average performer, worthy of taking a position that lasts for a week or less. Otherwise, you risk getting stuck in sideways trading that is suitable only for scalpers. To prove the point, TRX gained 11% against USD, and 4% against BTC, over the previous week, while remaining in the red throughout all other time periods. 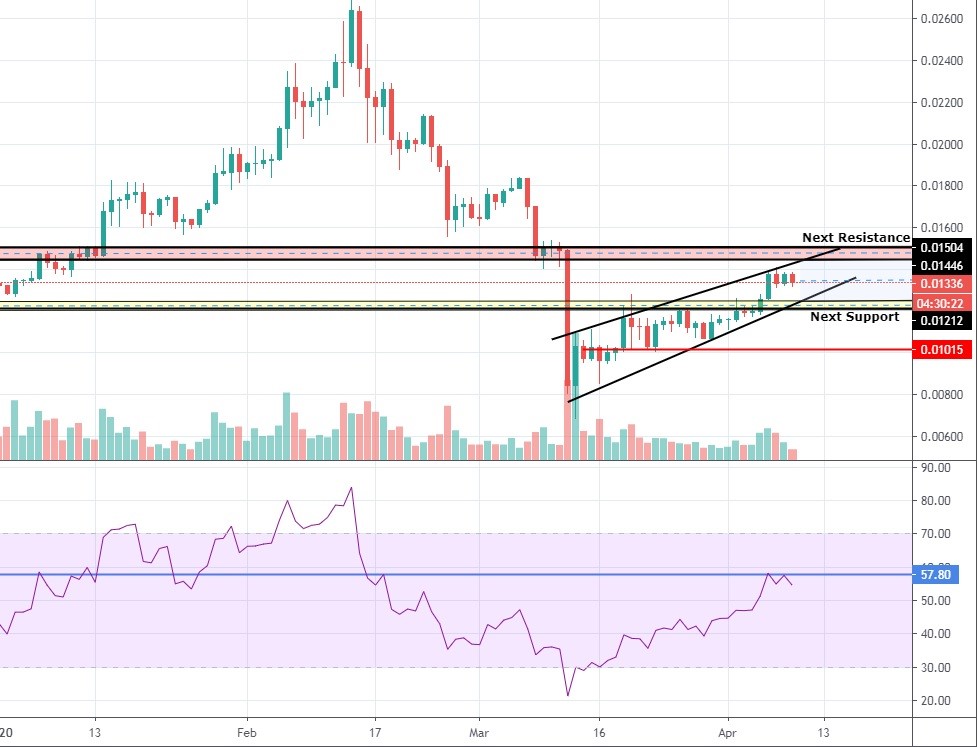 On the daily chart, we see how Tron takes an excessively long time to consolidate before finding strength for an upside impulse. At the same time, each such move is usually finalized with a deep retracement of nearly 80% of the initial price swing, although it still means that Tron is making higher lows, thus inching its way upward in a bullish contextual rally, which, nevertheless, could run its course if the global markets get hit with another bad news related to coronavirus, or the worldwide economic recession which begins to take its toll on both conventional and cryptocurrency markets.

However, despite those somewhat unimpressive characteristics, TRX has a few decent features which traders could find useful. One of them lies in the fact that the price action of Tron is very respectful of the historical support/resistance levels that formed many months ago. For example, the first resistance at $0.012 emerged way back in November 2018, with the price testing it at least four times since then.

The next similar resistance level lies at $0.0144, and coincides with the support that preceded the market crash. The price might breach it for a short period of time and even knock on $0.015, but will be pressurized down by the bears. The 14-period RSI is also bumping against the resistance at 57.8.

Since the optimism in the market, which we saw during the past four days, is burning out, TRX is going to be traded within the $0.012 - $0.014 channel over the coming week. The emergence of any bad news related to global issues will send the price tumbling to $0.1.