At the time of writing of the last TomoChain (TOMO) price prediction article, we expected the bull flag pattern to be resolved to the upside if the buyers managed to hold onto the interim support at $0.85, which they ultimately did, and TOMO exploded to the upside and added 82% to its value in just 11 days, peaking at $1.55. 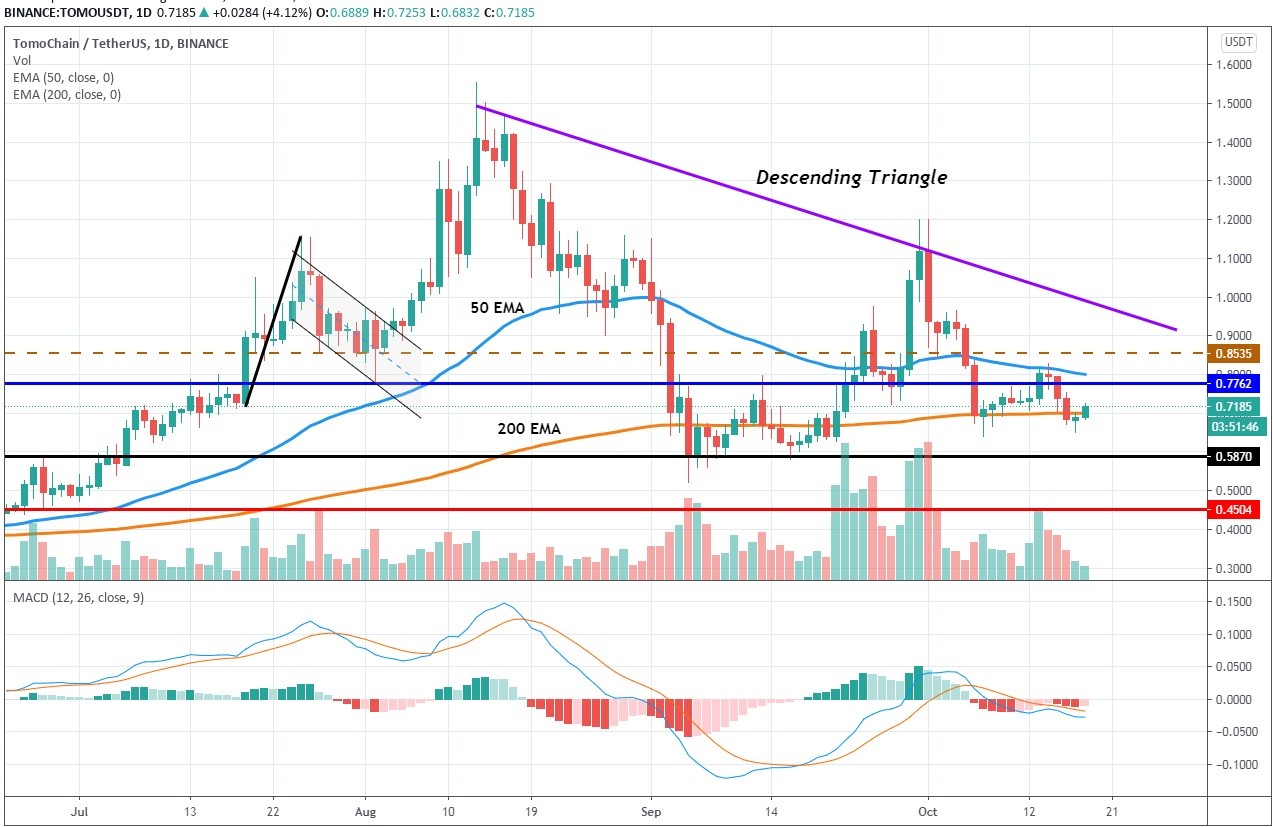 But after the failed attempt to establish the foothold above $1.3, TOMO went into a lengthy correction that was aggravated by the two selloffs at the beginning of September and October, which led to the price being dragged to the previous support at $0.58. Upon spending two weeks consolidating near that support, TOMO engaged in another bull rally that helped it to recover by 55%, but its strive to the upside was stopped abruptly at $1.2, forcing the DeFi coin to collapse beneath $0.77, the upper line of what now shapes up to become a consolidation channel, with its lower level sitting at $0.58.

The descending triangle determines the course of action

However, the probability of TomoChain breaking this channel to the downside is also quite high because the price had failed to establish a new higher high as the result of the last rally, making a clear-cut lower high that now threatens the entire uptrend structure.

Moreover, MACD has again descended into the bearish control zone, which could only mean that the selling pressure will continue to mount, and the price might fall to $0.4 before the indicator once again reaches the oversold bottom at -0.1.

Apart from that, we need to take into account a big descending triangle that stems from the top of the rally, reached in the middle of August. Traders have to wait for another seven to ten days for the resolution of that pattern, but the behavior of MACD, and the general conjuncture on the cryptocurrency market, dictates that TomoChain could be traveling south in the immediate future, with the most probable downside support levels being established at $0.58 and $0.45, both of which would mark the eradication of nearly all gains made this year.

Nevertheless, our outlook regarding TOMO is not entirely bearish as the buyers are doing a nice job of not letting the price slip too far beneath the trend-determining 200 EMA, which keeps flowing to the upside, though the angle of that flow has been flattening out over the course of the correction. Until TOMO uses this EMA as support, the chance remains for the resolution of the triangle to the upside, on the condition that MACD would return into the bullish control zone, along with a visible increase in buying volume.

If the price does break the resistance at $0.77 to the upside, the price target will stand at $0.93, the upper line of the descending triangle, which would bring the 28% profit to those who decide to go long on TOMO at this junction, though this kind of trade surely carries additional risks. We would advise waiting until the price goes above the 50 EMA before entering the trade - it would reduce the potential profit but also cut down the risks significantly.