In the previous Theta Token (THETA) price prediction article, we anticipated the 33rd altcoin to initiate the full-fledged correction upon hitting the price mark at $0.76. The bulls, however, have found enough firepower to push THETA a bit farther to the upside and establish the new all-time high at $0.796, at which point the token had initiated the predicted correction that was exacerbated by the dumps in September and October, as well as the recent rejuvenation of Bitcoin that occurred on the backdrop of PayPal's entrance into the cryptocurrency space.

Right now, Theta's price is at $0.61, which means that the bears had already eaten away 24% of tokens' highest evaluation, hence decreasing its yearly gains in USD to 524%, which is still more than impressive. Its performance in the Bitcoin market has also been vibrant as THETA remains 318% in the green against the dominant cryptocurrency. Interestingly enough, its average daily trading volume didn't suffer a considerable decline, as it often happens to the devaluing altcoins. During the past sixty days, it fluctuated between $49 million and $33 million, which showcases the stable demand for the token that powers the decentralized video streaming platform. 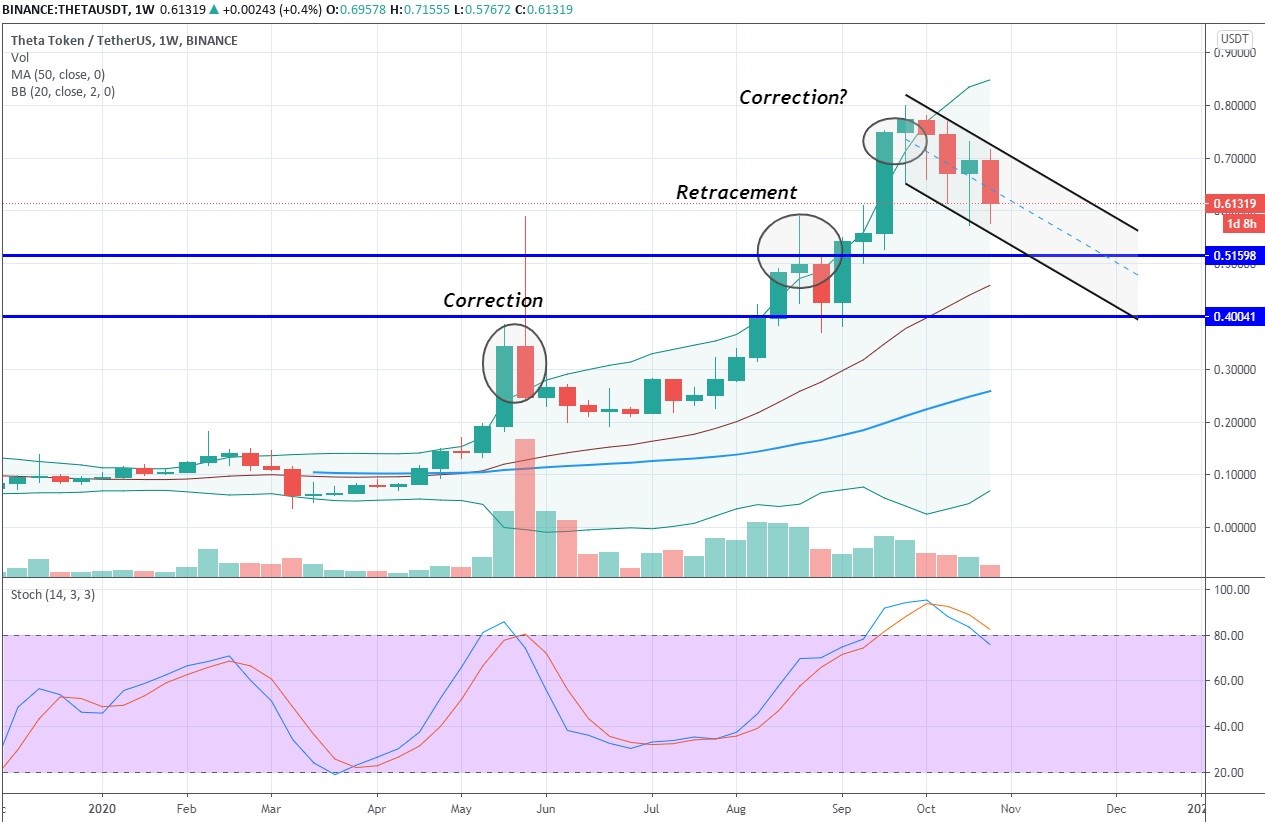 A stable average trading volume is one of the reasons why THETA didn't experience a sharp correction, which is characteristic of many other altcoins, but had the period of moderate bull rallies, like the one that occurred in the last week of October, when the price spiked from $0.58 to $0.73, at the time when Bitcoin (BTC) began its invasion above $12,000.

The inexperienced traders could have bought into the fake head and shoulders pattern that emerged as the result of the rally that still led to the downtrend continuation, which serves as the reminder of the importance of having the stop-loss in place.

On the weekly time frame, the support levels determined during the last prediction: $0.52 and $0.4, still stand. However, the probability of Theta Token finding the bottom of the correction at the latter price level had increased due to the worsening situation around the coronavirus pandemic that has already forced the traditional markets into a slump: the S&P 500 has fallen by 9% in the past two weeks. Given the correlation between the traditional and crypto markets, we could witness a dump similar to the one in March, but perhaps of a smaller scale.

But if the impact on the crypto market won't be as big as expected, the rapidly rising dominance of Bitcoin will seriously hamper all altcoins, including THETA, especially since it has been known for being a "counter-trend" coin, meaning that when BTC had been ranging or falling, Theta Token was seeking new highs.

Stochastic confirms that the bearish momentum is gaining strength, so the price is likely to accelerate its walk downhill during the coming three weeks. Besides, the Bollinger Bands remain wide open, which means that significant price swings are to be expected, though they should stay within the confines of the descending channel.