Theta Token (THETA) is by far the most successful cryptocurrency for the industry of esports, which is one of the areas where digital tokens and blockchain technology have been most welcome.

In a nutshell, Theta represents a peer-to-peer video streaming network that is conceptually similar to Twitch, UStream, and Mixer - popular platforms that bring together the professional and semi-professional gamers and people who are fond of watching their live streams. The popularity of decentralized streaming platforms, including Theta, has vastly increased after YouTube, which is also this platform’s main rival, and several other major streaming outlets began imposing draconian measures on streamers with regard to the monetization of their video content. By the way, the group of Theta’s media advisors includes Steve Chen, who is one of the co-founders of YouTube.

THETA isn’t a nascent cryptocurrency - it had entered the market in the middle of January 2018, right before the commencement of the prolonged bear market, which, probably, had seen its last days at the tail end of 2019. Theta Token managed to catch just a glimpse of the 2017/2018 hype that still managed to take its price to the all-time high of $0.28, on even $0.31 on some exchanges, which is only 43% higher than its current price of $0.18, as of the time of writing. 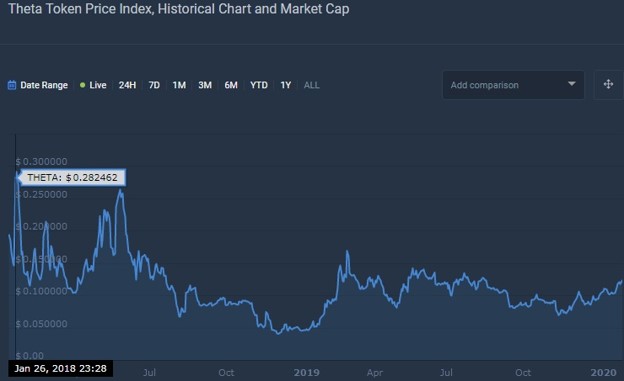 This year began incredibly well for the gaming cryptocurrency as it’s presently flashing green double-digits across the board: 86% gains against the US Dollar in the last 30 days and 51% compared to the progress of Bitcoin.

Suitable for trading against Bitcoin

By the way, THETA has proven to have little correlation with the price action of BTC, as shown in this comparison chart from last month. 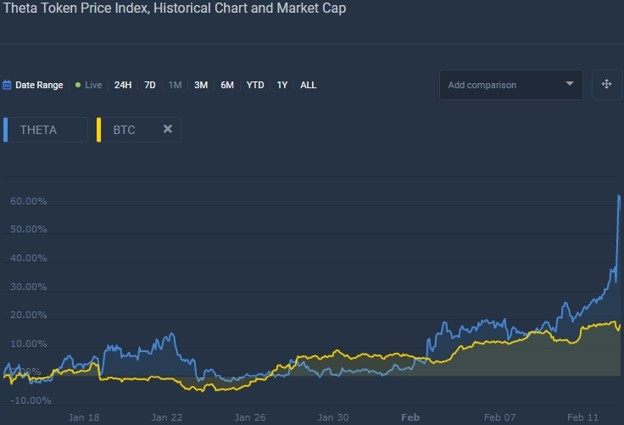 This makes it very lucrative for holders who also have Bitcoin in their portfolios. For instance, on this daily THETA/BTC chart, we can see the altcoin putting up a large green candle, which marked the daily gains of 23% in that particular trading pair. 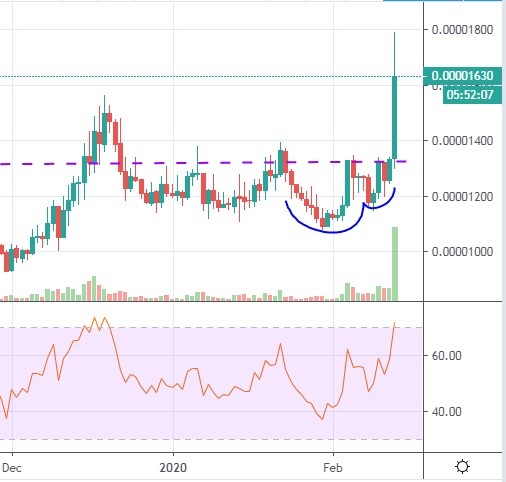 The price action, which took place since the beginning of the year, had formed a cup and handle pattern, though it appears to be slightly crooked due to the presence of a false breakout candle that didn’t manage to overcome strong historical resistance at 1,313 satoshis, at least at the first attempt. But after a brief retracement, the price made a powerful dash to 1,800 satoshis, though is now being pushed down by the bears. Given that THETA is now in the overbought zone and is being actively rejected by the buyers, there is a definite probability of a retracement to 1,500 sats or even slightly lower, with the further move upward, should the Bitcoin dominance continue to decline.

The same confident performance is being displayed on the daily THETA/USDT chart, where the downtrend reversal was marked by the emergence of a bullish pin bar. 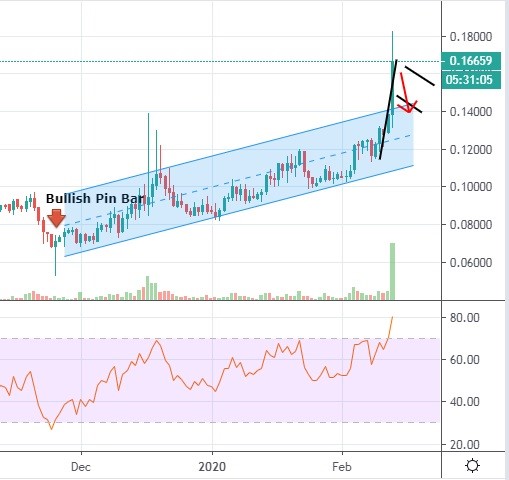 For the duration of the last two and a half months, the price of Theta Token was moving in the perfect upward channel before breaking out to $0,18, gaining 21% in one day. Now it appears to be going into a bullish flag formation, with the possibility of retracement to $0.14. By doing that, THETA would signal about the continuation of the uptrend, so those who missed the pump of the last few days should wait for the bottom of the retracement to place a buy order. As things stand, Theta Token will continue its conquest of the $0.18 resistance, which shouldn’t take longer than a week.