Even though Theta (THETA) has nothing to do with decentralized finance, the hottest crypto niche in 2020, it has proven to be one of the first big “pumpers” of this year as it used the COVID-19 crisis as a starting point of a humongous multi-week bull rally that attracted the attention of all retail traders who are interested in the altcoin market. Theta had even gone as far as to outperform Bitcoin by 202% and even Ethereum by 64% on a yearly scale.

But then came the correction and along with it, the frustration of traders who hoped that the rally would last forever and went long near the top of the upswing.

You can see it on the all-time chart below how THETA had taken a nosedive shortly after it went above $0.4 that had ultimately resulted in a moderate correction, the bottom of which formed just above $0.2. By the way, that is exactly what’s going on right now with Chainlink (LINK) that is also crashing down upon reaching the ATH at $20, but that is a topic for another price prediction.

After spending some time loitering around near $0.2, THETA began gearing up for another rally that has put this altcoin on the trading map once again. During the previous month, the currency gained 77% against USD, 40% against BTC, and only 5.4% in the pair with Ethereum, which is understandable, given the recent achievements of ETH, thus allowing even those who stepped into this market at the top of the last upswing to break even or make some profit since the price has already formed a clear higher high above $0.4, although we need to wait for the week’s close to determine the exact higher high.

Even a glance at the weekly chart shows that the coin for video content creators is already in the midst of the second phase of the uptrend, so the question now is whether THETA would see another retracement/correction upon setting the higher high or would make another push to $0.5 and then take a breather? 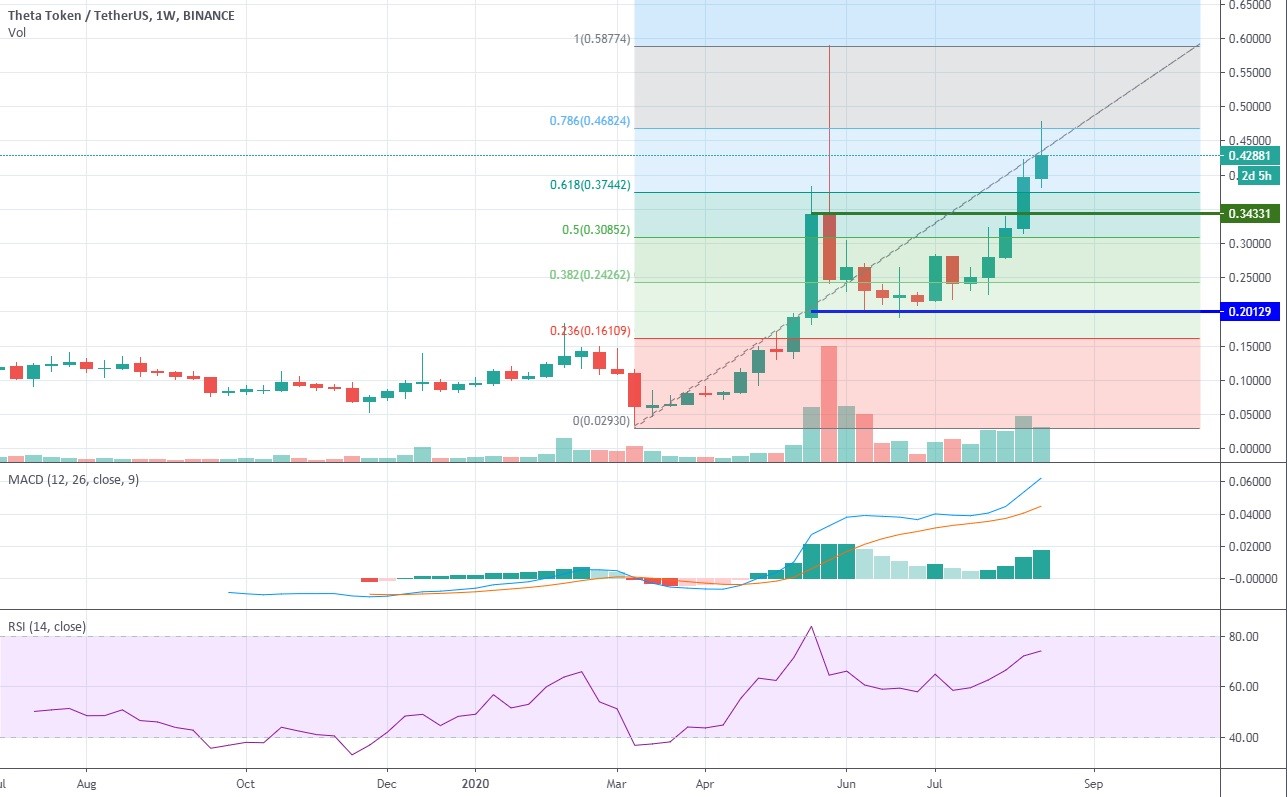 The showings of key indicators suggest that THETA still possesses some upside potential, but the bears will soon come into play.

The trading volume appears to be increasing at a steady pace, which is yet another indication that THETA will aim higher during the next week. We used the Fibonacci extension tool to determine the scope of the upside push on the part of the buyers. The price got the initial rejection at 0.786, but closing the week above $0.4 would be sufficient enough to predict that the price will rise above $0.45 over the course of the coming two to four weeks, and then, if the market conditions remain more or less the same, shoot up straight to $0.6, at which point, traders might want to prepare themselves for the second correction.