Many traders tend to disregard the lower-ranked cryptocurrencies, mainly because finding an appropriate coin requires a great deal of time and research. It’s always easier to stick to the top 10 or something cryptocurrencies because of their reliability and high trading volume.

But those who do devote time to finding diamonds in the dirt are often rewarded with substantial gains, like the ones showcased by Stratis (STRAT), the 106th cryptocurrency that is close to putting the bloodbath that happened in mid-March behind it.

Stratis represents a solution that has been gaining a lot of traction in the past few years - BAAS, or blockchain-as-a-service, the essence of which lies in providing businesses and individual developers with a full arsenal of tools for creating private blockchains, integrable with the native Stratis network. What makes Stratis different from the competitors such as Ethereum is the fact it allows building dApps using the commonly used C# programming language, whereas Ethereum requires the knowledge of Solidity.

While this may not seem like an overly sophisticated product but it appears to have found its niche since the project has a stable market capitalization of $27 million, whereas the average daily trading volume of STRAT is like on jumping ropes, fluctuating from $484, 000 to $12 million in a span of a few days. 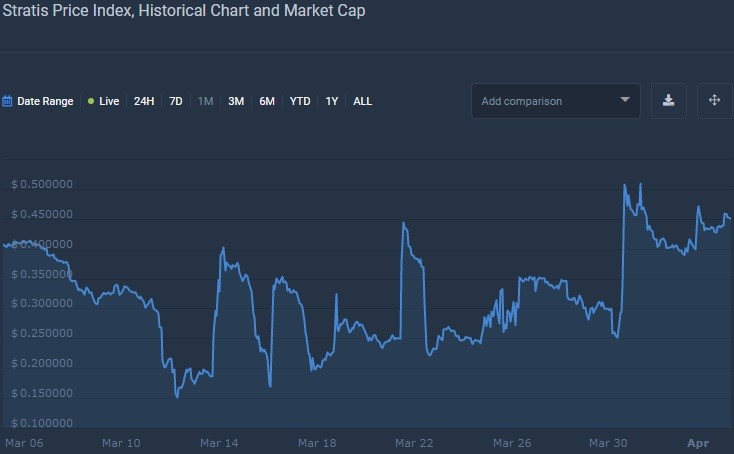 A choppy but nonetheless impressive price recovery of STRAT during March

But the area where Stratis has really been booming is the gains, especially over the past thirty and the last seven days. It has outgunned Bitcoin by 41.8%, Ethereum by 72.4%, and USD by 9%. Right now, the coin is only 5% away from getting out of the dark pit, into which it had been pushed by the market panic induced by the COVID-19 threat.

Stratis has already climbed above 50 EMA

Following the market collapse on March 12-13, Stratis hadn’t played out the scenario that the majority of other cryptocurrencies went through - the plunge wasn’t followed by a large rebound candle that should have trapped the buyers for some time. The buying volume on that day has also been insignificant, showing a small-to-average initial demand for this coin.

Nevertheless, the coin had immediately begun forming a bullish S-curve pattern that should have been evident for seasoned traders. The bullish volume came right at the peak of that curve to finalize a textbook move to the upside that provided 77% gains in a single day. However, the bears had immediately pressurized the price back within the confines of the ascending wedge, where it continued the movement to the upside, diligently testing the diagonal support level. 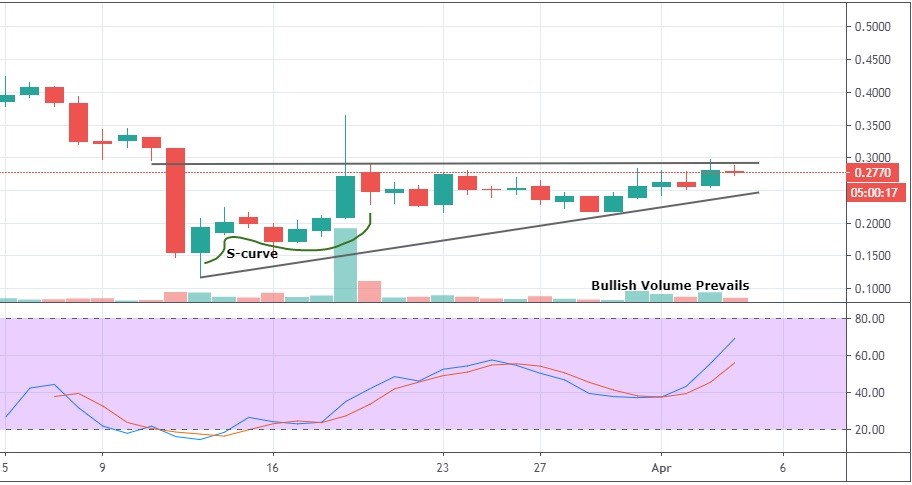 In the next several days, traders will see STRAT either re-testing the said support level at $0.244, or shooting straight above $0.3. The upward move is supported by the 14-period RSI, which is still in the neutral zone, looking northward, that is a clear prerequisite for a further price increase. However, the ATR indicator has nearly approached its extreme lows at 0.005, thus denuding traders of hope for an explosive spurt to $0.35 with the following pullback. Our Stratis price prediction is that the coin will continue conquering $0.3 in a steady yet persistent fashion, further narrowing the price range by testing the support. The price burst should occur within the next five to seven days.

Stratis (STRAT) Gets Bullish After Consolidation