Stratis (STRAT) Gets Bullish After Consolidation

Although the year 2019 wasn’t exactly fruitful for Stratis (STRAT), as it lost 46% of its dollar value, and more than 30% of its worth in two chief cryptocurrencies, Bitcoin and Ethereum, the period that followed the COVID-19 market crash is shaping up to become a probable trend reversal. However, the coin still has a lot more to gain before it encounters the first major barrier at the high of the previous year that stands at $1, recorded on July 27, 2019. 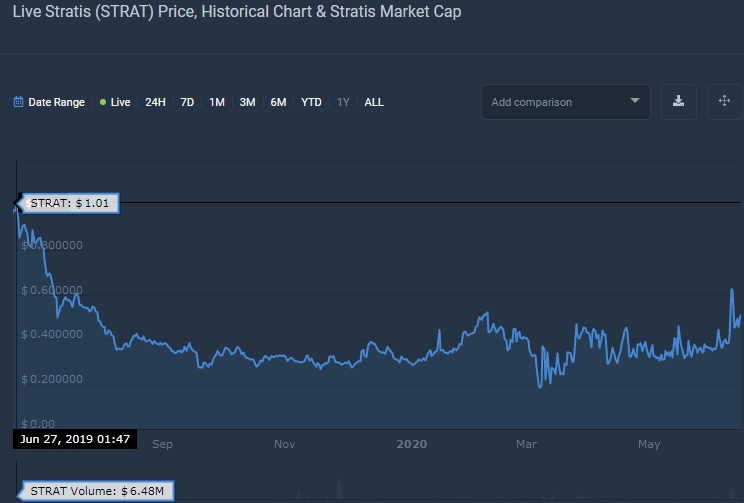 The chart above pinpoints another crucial area of price action located at $0.4, which had served as a local high before the current price action broke it after a series of tests, and now seeks to either confirm it as a support or leave this level behind altogether.

Basically, STRAT is now in the situation where it needs to stay above the designated support line in order to:

Before now, Stratis had had a very extensive period of consolidation that lasted from August 2019 until around June 3, when STRAT made a decisive push to the upside and beat the resistance.

The current situation in the USDT market

As already mentioned, Stratis took a bit of time to properly recover from the aftermath of Black Thursday, although it did make a strong initial push in the week after the crash, with the upper wick of a failed breakout candle only briefly penetrating the ultimate recovery zone at $0.33. Also, notice a weird morning star pattern that emerged at the top of the first retracement wave, which must have led plenty of traders into a trap since it has actually served as a bullish reversal pattern. Therefore, this market is capable of producing irregular patterns that could act in contrast to their textbook meaning. 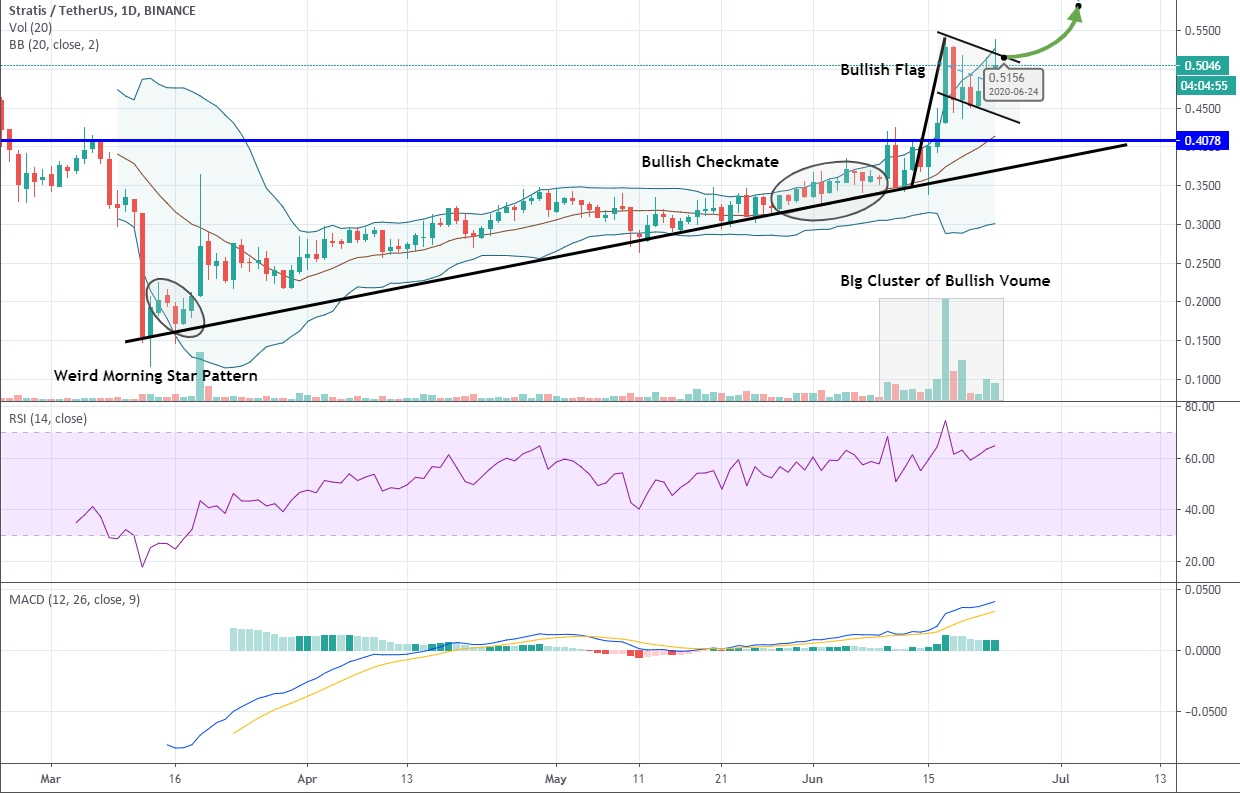 Right now, the altcoin is set to resolve the current bullish flag to the upside, possibly even in the three white soldiers formation that will further confirm the bulls’ intention to take the price to $1.

The trading volume profile reveals an enormous cluster of buying volume, which signifies the growing traders’ interest towards STRAT that will ultimately translate into substantial gains of no less than 20% in the next six weeks. After the last pullback, we see that the bullish volume is again on the rise, so traders might witness a breakout above $0.55 in eight to ten days.

All key indicators are also significantly bullish on Stratis, which could be interpreted as a strong signal to buy at the break of the bullish flag.

The RSI is in a strong uptrend, showing no bearish divergences that could influence the price negatively. Right now, the indicator is at 65 in the upper neutral zone;

MACD is insistently bullish thanks to the extensive green histogram and the widening signal lines that head towards 50;

To summarize, the next couple of weeks are shaping up to be bullish for Stratis, and now might be an appropriate time to go long here, as the risk/reward ratio is about 1:5.