Steem is rightfully regarded as a pioneer in the space of blockchain-enabled social media platforms. It was arguably the first project that acquainted users with the concept of token rewards in exchange for captivating web content.

Steem’s own blockchain-based social media platform gained some traction in 2017 - many Internet users became aware of cryptocurrencies through blogging on Steemit. The influx of content creators took the price of STEEM to the all-time high of $6.6, but then came the infamous crypto winter. To cut the story short, Steem is a fully-fledged blockchain ecosystem, so the coin is solid in terms of fundamental value, though it didn’t have the best of times over the past couple of years.

YouTube censorship could bring STEEM back into the game

Apart from Steemit, the project had also rolled out a decentralized video streaming platform called DTube, which is conceptually similar to YouTube that is currently finding itself in the midst of controversy regarding the unjustified removal of content from cryptocurrency bloggers. Not to mention the draconian monetization policies that made many talented content creators abandon YouTube and turn their attention to DTube, which is also fueled by STEEM token. This, in turn, would drive the demand for the cryptocurrency up, hence increase its value. However, there are many similar platforms popping up every year, so traders shouldn’t expect any price wonders solely on the basis of fundamentals and infrastructural developments within the Steem ecosystem.

The recent and the future price action of STEEM

Like the vast majority of cryptocurrencies, Steem didn’t stand aside while the bull took the market on a rally. But in the case of STEEM, the price surge began much later, though it turned out a bit more intense than that of Bitcoin, for instance. 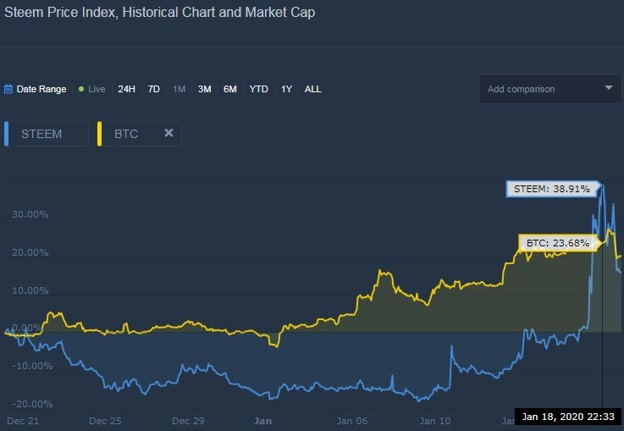 After making the 38% gains, the value of the social media token fell as abruptly as it has risen from the height of $0.23 to $0.16, as of the time of writing. As you can see on this 4-hour chart, the price has been pushed down firmly with just several red candles, right to the 50-day moving average, crossing which could open the gateway for a further downfall. 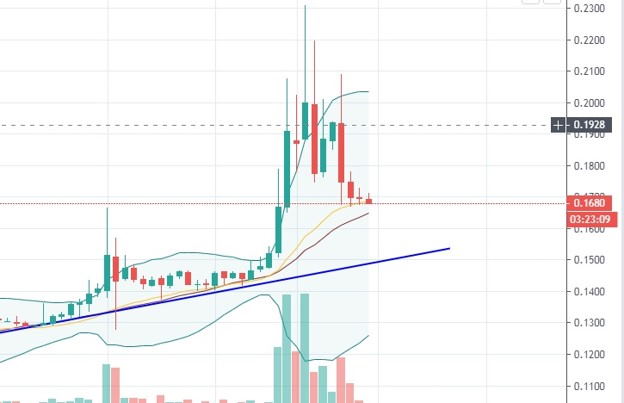 Moreover, the price has just shot to the upside from the Bollinger Band squeeze, which means that the coin has entered a period of intense volatility. The most probable scenario within a short period of time constitutes in STEEM hitting the support at $0.152 if the coin intends to keep making higher lows, thus maintaining the potential for the continuation of the bull rally. The daily chart tells very little about the crypto’s next move, although the fact that the RSI is still very close to the oversold region hints at the possibility of further retracement.

The picture becomes a bit clearer on the hourly chart, where we can see STEEM breaking through the bullish flag to the downside while also exiting the Bollinger Band squeeze in the same direction, accompanied by a relatively large sell volume. The RSI is at 40 - rather far from the oversold area. 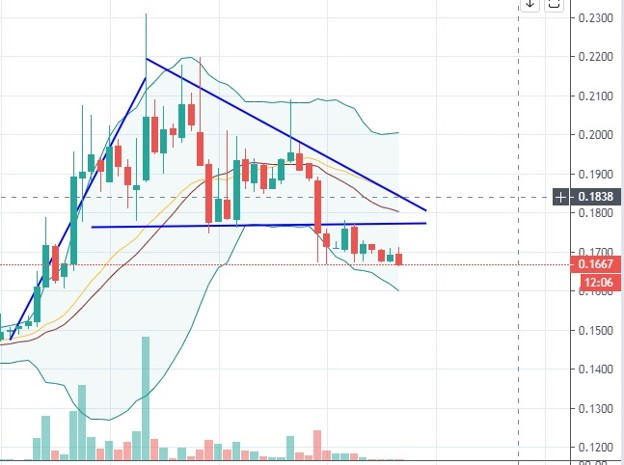 All these signals provide enough evidence that STEEM might have exhausted itself on the move up, so now it looks at the open road to the southside. Selling the coin might be the best option at this point in time with the possibility of buying back if it holds the support at $0.152.