Steem is a blockchain solution that enables users and content creators to earn the project’s proprietary cryptocurrencies - Steem (STEEM) or Steem Dollars - by engaging with each other on the social media platform called Steemit.

The process of engagement involves publishing written or video content in the blog, which gets upvoted (or downvoted) by the followers or other members of the Steemit community. Each upvote earns the creator a certain amount in Steem Dollars, depending on the so-called “voting power,” which relies on the amount of Steem tokens staked in the personal blockchain wallet that is provided to all users upon registration.

Users can upvote the content for the duration of seven days, making it more valuable and visible on the platform - the funds stay locked at that time. Once a week after the publication date passes, the creator’s wallet gets credited with the corresponding amount of Steem Dollars, which the user can subsequently exchange to Steem, thus boosting the status of his account on Steemit, or exchange it for other cryptocurrencies by virtue of various exchanges.

Steem also has a number of side projects, such as DLive, which was designed as an alternative to YouTube, right at the time when the larfgest video content publishing platform began implementing draconian measures with regards to monetization and ad placement. The popularity of DLive exploded after PewDeePie, one of the biggest names in the community of YouTubers, announced that he would be switching from YouTube to the blockchain-powered platform.

How Steem performed in 2019

However, all these positive initiatives have only managed to keep the price of Steem, and the accompanying Steem Dollars, afloat without taking serious dives over the course of the current year. Long gone are the prime days when Steem was at its all-time high of $7,28, to the jubilance of the holders of this coin.

It should be mentioned that Steemit locks a half of earned tokens in the wallet to increase the weight of the account. Withdrawing such funds takes something around 13 weeks, so all those who had missed the right moment to sell Steem in 2018, when it has been rolling down to its current price level of $0,14, got stuck with substantial amounts of STEEM all the way through 2019.

At the dawn of the year, STEEM bottomed out from $0,25, before reaching the yearly highs of $0,5 in April. After that, the cryptocurrency had performed what seemed to be a dead cat bounce, falling abruptly to $0,3 and then making a quick recovery to $0,43 only to continue the downfall, breaking the $0,3 resistance and finding some ground under its feet at $0,13. 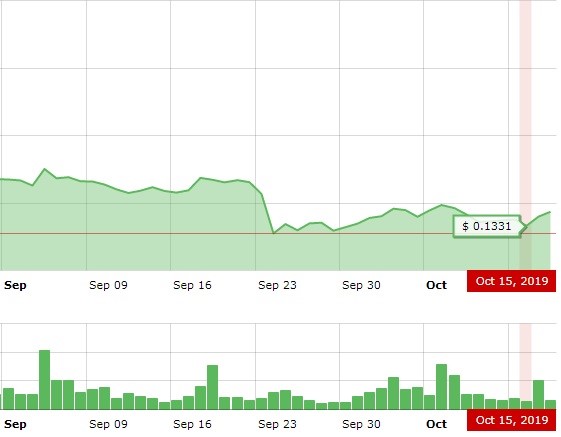 The predictions for the remainder of the year doesn’t look particularly bright for STEEM since the company has engaged in a feud with users over the voting power on the platform.

In order to resolve the aforementioned issue, Steemit has introduced the new system for reward distribution called NewSteem, which suppose to make the underlying algorithms fairer. The results of this initiative may become evident at the beginning of 2020, which should be reflected in the price of STEEM. However, it would be unwise to expect any radical shifts in STEEM evaluation since the platform’s reputation had already been hampered.

In the positive turn of events, STEEM would recover back to its 2019 highs of $0,5 by May 2020, on the back of the expectations from the BTC halving. Otherwise, it could continue bouncing back and forth in the $0,14 - $0,2 corridor.