The outbreak of coronavirus has changed the world as we know it, at least for the time being. Not only did it provoke arguably the largest instantaneous crash in the history of the cryptocurrency market, but it also forced people to reevaluate the importance of efficient communication due to the emerging need for organizing an efficient workflow amidst the global lockdown. That is one of the main reasons why cryptocurrencies like Status (SNT), which has at its core a blockchain-based messaging application that also includes a cryptocurrency wallet and a built-in web browser, have been having an enormously productive period after the market meltdown.

Status is getting out of the red

It appears that the crisis had breathed a new life into SNT as it slowly began to compensate for the last year’s losses and has even gained 12.9% against Ethereum on a yearly scale, although it still has barely made a 1% gain against USD. But things look much better for SNT in the monthly time frame as the coin is up 40% against USD and 27% against BTC in the past 30 days, and that’s taking into account the 25% retracement that the price has already had after hitting the local high at $0.034. 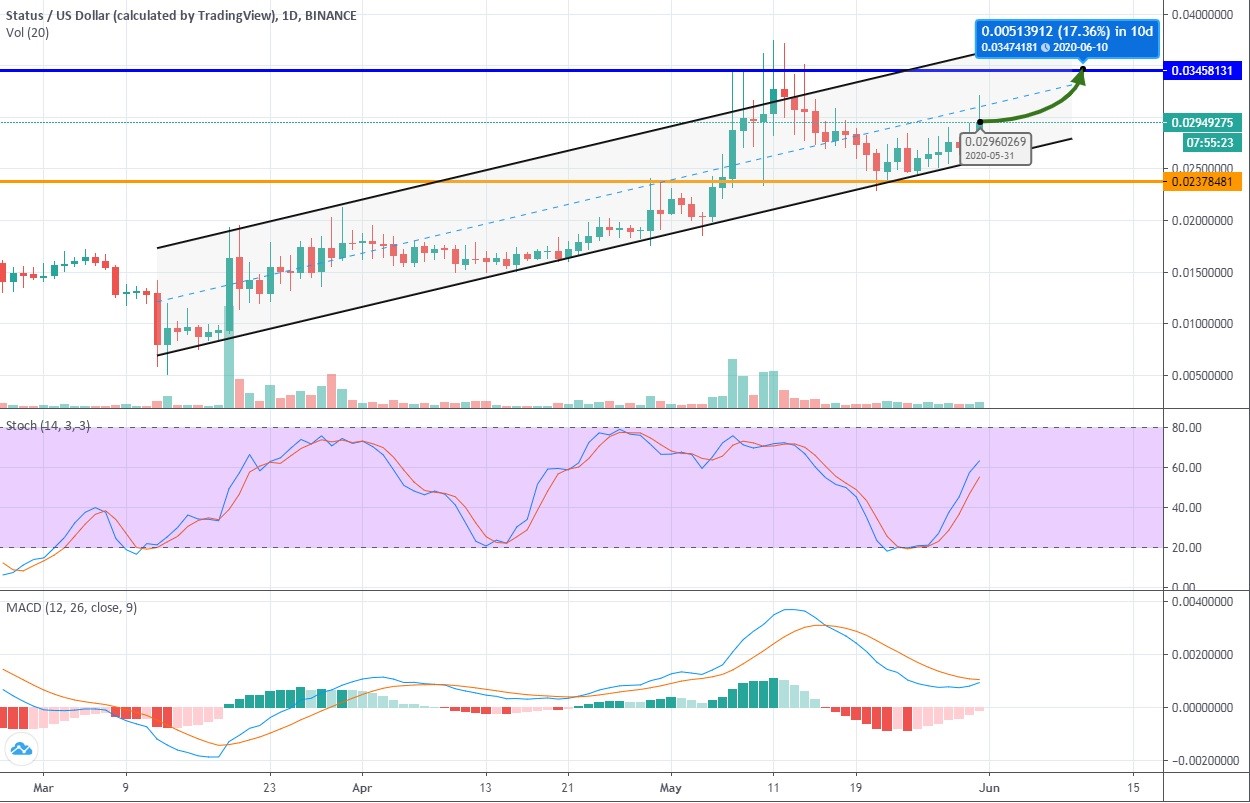 That level is of key significance for Status because it goes all the way back to the period that preceded the biggest bull market in the history of crypto, during which Status reached the all-time high at $0.55. SNT’s first attempt to break the level at $0.034 has failed, and the price pulled back to the previous resistance-turned-support at $0.023. Right now, the coin appears to be gathering strength for a second go at that resistance, which could be a fruitful one, judging from the way how key oscillators/indicators are lining up.

The 14-period Stochastic is looking immensely bullish as it is actively making headway across the neutral zone to the upside, currently going past 60. While showing no evident intention of making a crossover to the downside, Stochastic leaves SNT enough room for another 20% sprint before reaching the overbought region;

MACD appears to be even more bullish as it is preparing to cross to the upside, which means more upside action, while the bearish period, depicted as a red wave on the histogram, didn’t end up with at least one of the lines diving below zero, thus signifying that the market is still mostly bullish.
Bollinger Bands have begun to squeeze again after the first powerful move, so traders should expect a period of volatility during which the price is most probably to travel to the aforementioned resistance level. The approaching volatility is also shown by the ATR indicator that began to rise to 0.004 after the retracement.

The volume profile for that move is not particularly impressive since it is visibly smaller than that of the last upswing, but the buying one is still prevailing, thus providing a sufficient basis for a predicted 22% move to the upside in a span of the next ten days to a week. Watch the level at $0.034 closely, because if SNT fails to break it to the upside, it will form a double top pattern, which is a strong prerequisite for a protracted bearish period.