There is a widespread belief among cryptocurrency experts and traders that tokens that represent blockchain-enabled medical solutions are inherently unattractive and weak, mainly because the medical & pharmaceutical industry itself is very conservative and reluctant to embrace the technological innovations of the next generation, such as blockchain.

Unfortunately, these arguments are mostly valid as the blockchain projects that attempted to permeate the medical space end up knocking their heads against the brick wall. But as always, there are exceptions such as Solve.Care, a healthcare blockchain company that issued the ERC20-compliant token SOLVE, which has been listed on the cryptocurrency exchanges in February 2019.

Since the release, SOLVE went through the rollercoaster ride, first diving to the bottom, then being catapulted to the all-time high at $0.5 only to end up in a lingering bear market after drawing a head and shoulders pattern. 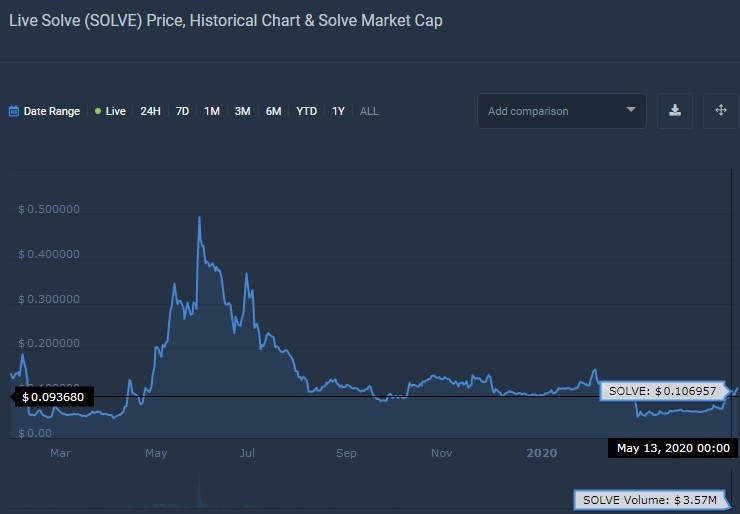 On March 13, the medical coin's price went to the all-time low at $0.33, from which point it began looking for a way to get back to the long-standing support level at $0.1, which it ultimately did. As of writing, SOLVE is priced at $0.15, after gaining 12% on the day and a shocking 151% against USD and 85% against Bitcoin over the past 30 days. The chart of SOLVE's price action from last month demonstrates how it took off from the swampy consolidation area at $0.068 and flew straight to the stratosphere, and by doing so flipped the aforementioned long-term monthly resistance effortlessly at $0.1 to become firm support, at least for the time being. 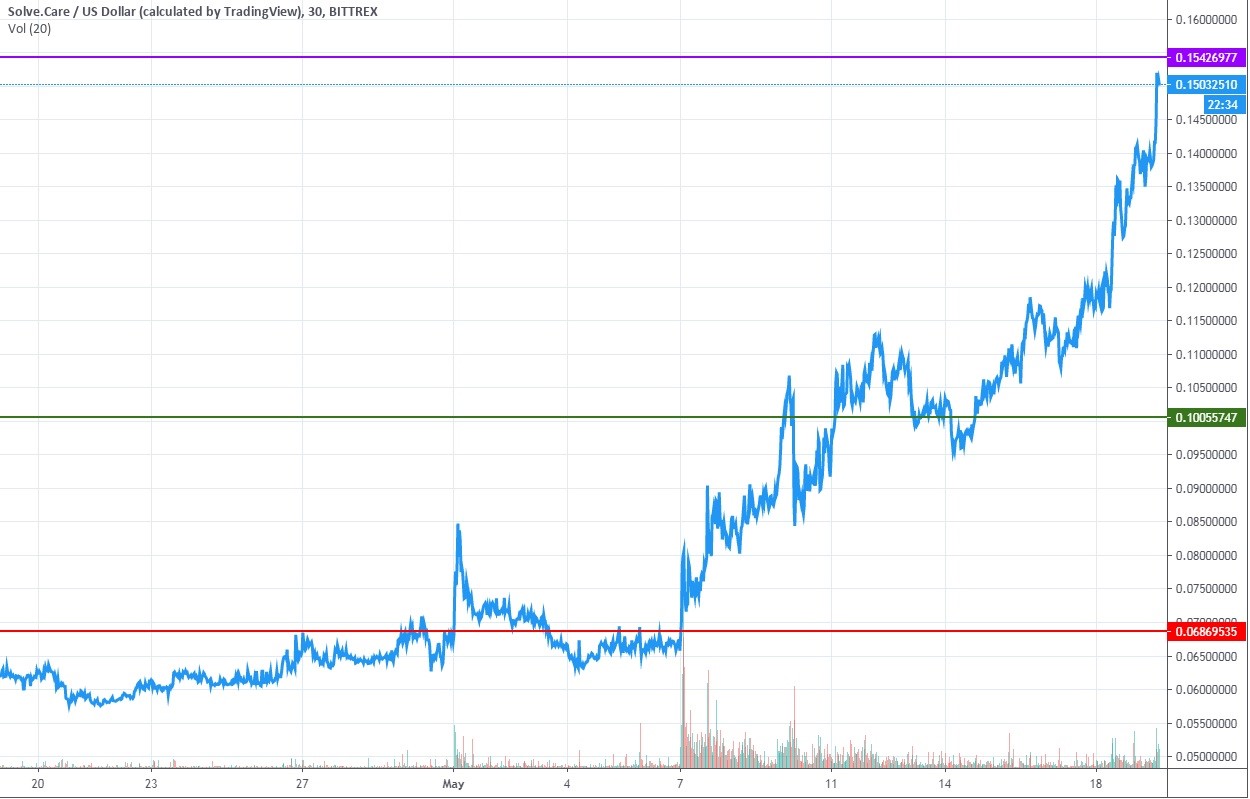 The question now is whether SOLVE would go through a strong pullback to retest the support area at $0.1, or would it try to have a go at the next point of resistance at $0.154, and would it breach it or get rejected?

The resistance gates are going to be rammed

SOLVE did test the support at $0.1 upon breaking it, but very briefly. Therefore, there is still a probability that the price would make a trip back to that zone in case it gets aggressively rejected by the bears. 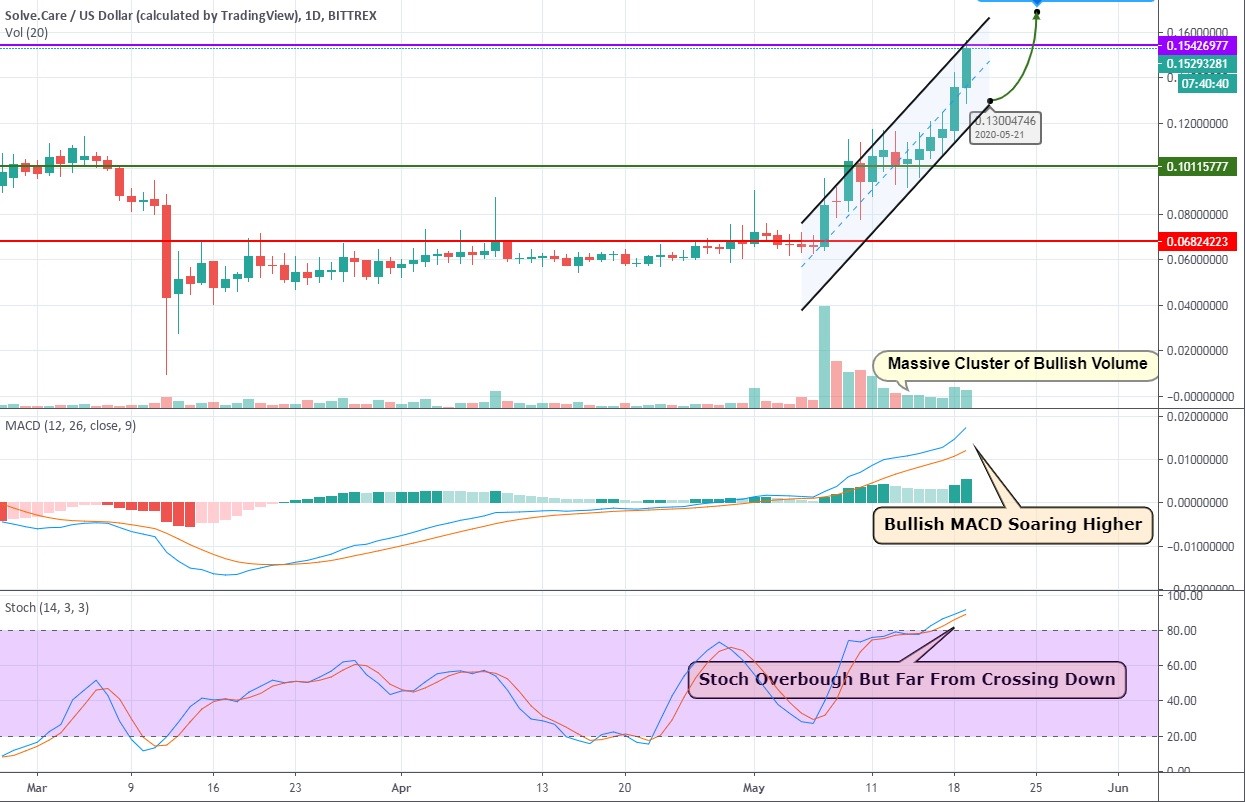 However, the bears aren't playing first fiddle in this market at the moment since their presence has been virtually non-existent after the price made a cannonball-like flight to the upside. The analysis of the volume profile shows that the bulls have no intention of giving up the initiative here, firstly, because the volume has been on the buying side for six days in a row, and secondly, it has actually begun to increase over the past two days, a clear hint that the buyers are geared up to take SOLVE past $0.154 and possibly higher.

To make matters worse for the bears, MACD's lines are aiming higher and further away from each other, a sure sign that the bulls are running the show. Also, notice that the last two green trees on the histogram are literally towering above the rest, so the upward momentum is still intact. Lastly, Stochastic is at the highest it has been in months, and although it is already in the overbought area, it hasn't hit the extremes at 100 yet, so the bulls still have enough breathing space to break the resistance at $1.54.