Seele: Consolidation Before the Possible Breakout

At the moment, Seele (SEELE) is officially the second most powerful gainer on a yearly time frame with the 910% value increase in USD, while SwissBorg (CHSB) is holding the first spot after having made 983% to the upside over the same period of time. However, the peak of bullish price action happened in the fall of 2019, whereas right now, the altcoin is dealing with the consequences of the market collapse that occurred in March and brought Seel’s very prominent uptrend to a halt.

Nevertheless, the coin that represents the heterogeneous multi-chain ecosystem that runs on the Neutral Consensus protocol shows eagerness to stick to the bullish scenario, which translated into a head & shoulders formation on the all-time chart. That formation has proven its reliability on all time frames, which gives us sufficient reason to believe that SEELE is going to aim for the new higher high above $0.17, although establishing it could take up to three months.

Right now, Seele is priced at $0.009, with the market capitalization of $69 million that has reduced in size by half since January 2020.

Seele is traded almost exclusively on the Huobi Global cryptocurrency exchange that takes up 96% of the overall trading volume. During the last 30 days, the average trading volume has been mostly stable at around $14 million, with occasional spikes to $22 million and even $35 million on May 26, which tells us that SEELE is dedicated to making slow but consistent gains during the coming weeks, using the 50 EMA as support.

Seele might hold the promise of the cupful of gains

Speaking of moving averages, the trend-determining 99-period EMA has flattened out right after the emergence of the cup and handle pattern on the daily time frame that is widely considered as being either the continuation or the reversal pattern. 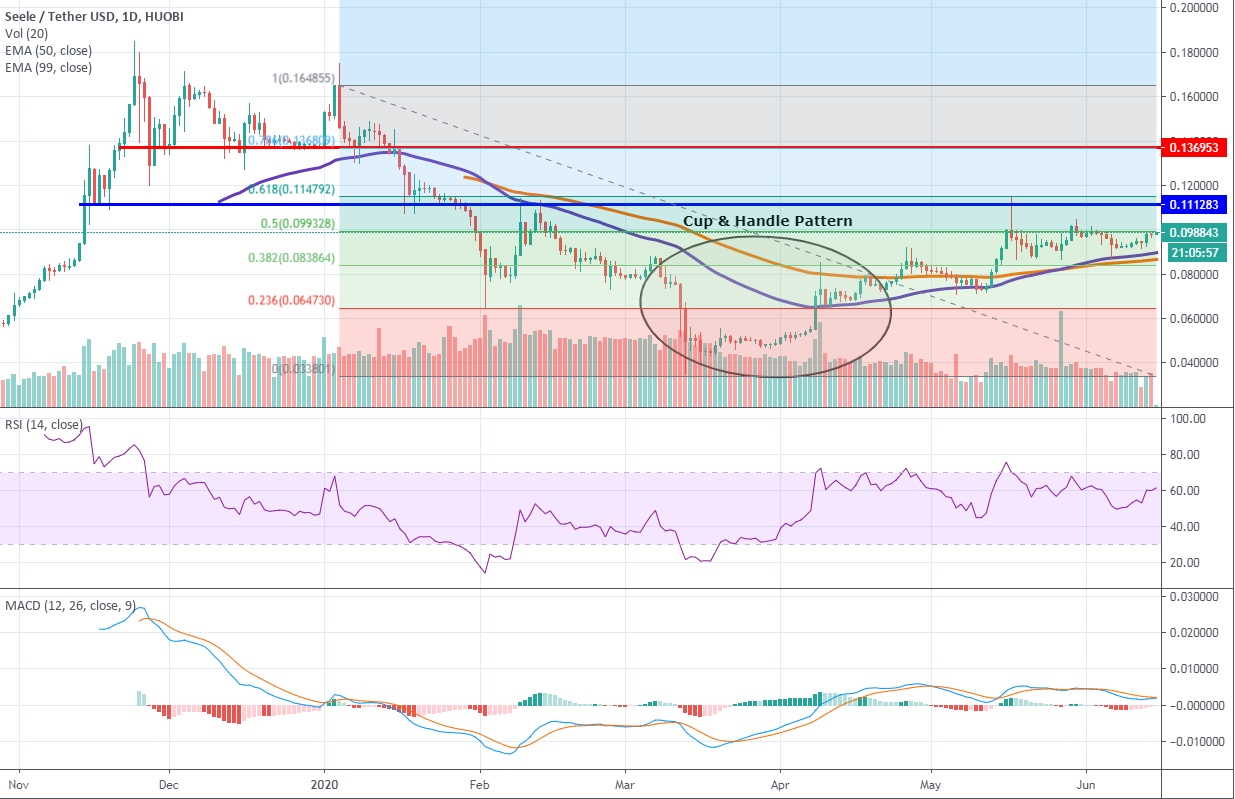 Also, please note how the indicators changed their stance to being bullish even before the pattern was finalized, which points to the moment when the bulls began to seize the initiative in this market.

But, apparently, the road to the upside won’t be an easy one for SEELE since there are two major resistance levels at $0.11 and $0.13 that converge with the 0.618 and 0.786 Fibonacci retracement levels that will amplify the resilience of these barriers. In fact, the price already managed to puncture the resistance at $0.11 once but was immediately rejected to 0.5 on Fibonacci, where it began to consolidate.

Interestingly, MACD remained mostly neutral throughout the entire period of bullish price action, thus leaving plenty of room for the price to perform an upswing to the higher price target. The RSI is also relatively far from flashing the overbought signal, but at the same time, the indicator shows that the bulls might be loosening their grip on the market as it displays inclination towards remaining neutral for the time being.

In conclusion, SEELE is definitely showcasing plenty of bullish potential. However, that potential mightn’t be realized immediately as the bulls and the bears seem to have clinched near the price level at $0.01, so traders should prepare for more consolidation in the coming week, but still retain the bullish outlook for the next month.