Ripple (XRP) has had a negative vibe around it recently as it was named the worst-performing asset among all top cryptocurrencies. Moreover, traders and cryptocurrency investors alike are gradually losing interest in XRP - a study, carried out by the leading data providers revealed that the overall mentions and discussions related to the 3rd currency have declined by as many as 16% over the first quarter of 2020. The number of dedicated Twitter and Telegram users, which labeled themselves the XRP Army, tanked by a massive 82% since the beginning of the macro downtrend in 2018.

Interestingly enough, there has been a direct correlation between Ripple's 30-day average Twitter readers and the coin's price in Q1 of 2020: starting from February 23, the number of users declined from 2500 to 1800, followed by the price, which had a massive slump from $0.3 to $0.16.

Another fact that worries traders who keep their faith in this coin is related to huge liquidations of XRP that Ripple Labs carried out during Q3 of 2019. In that period, the company liquidated $250 million worth of cryptocurrency, which many believe was caused by the class-action lawsuit that severely undermines both the company's reputation and financial stability. It is yet unknown how much money in XRP the firm has liquidated in 2020, but once that number comes out, it will surely exert a tangible effect on the price.

XRP is making its way up regardless of the negativity

However, it is not the cryptocurrency media but the market and the price action showings that have the monopoly on ultimate truth. Presently, the truth is that Ripple has already made its way up towards the levels that preceded the flash-crash that happened in the middle of March. To put it in plain numbers, XRP gained 20% against USD in the past 30 days, accompanied by 13.2% over the duration of the last week. Its performance, though, was visibly inferior to that of Bitcoin and Ethereum, as it becomes apparent from the comparison chart below. 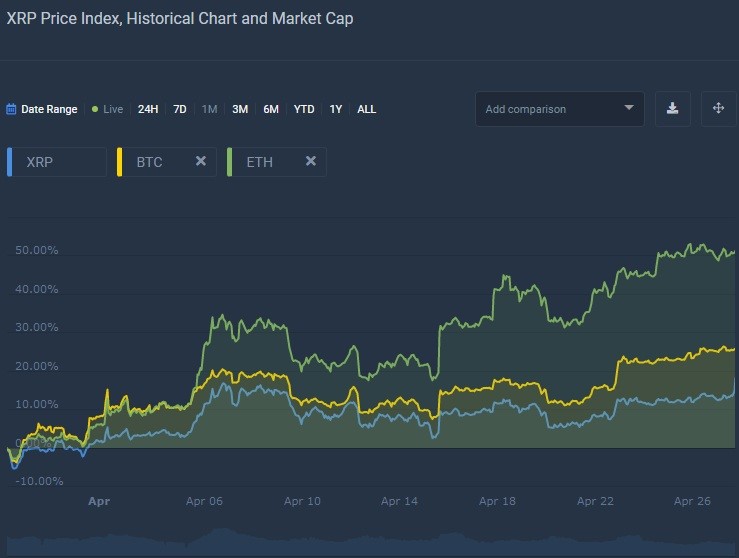 Nevertheless, Ripple is making slow but steady gains, which means that there is no reason to give up on trading this cryptocurrency, which can't be said about the long-term holding. With all that being said, let's delve into the analysis of the price action, which shows that XRP has finally recovered to $0.2, the level from which it dived to $0.1 six weeks ago. 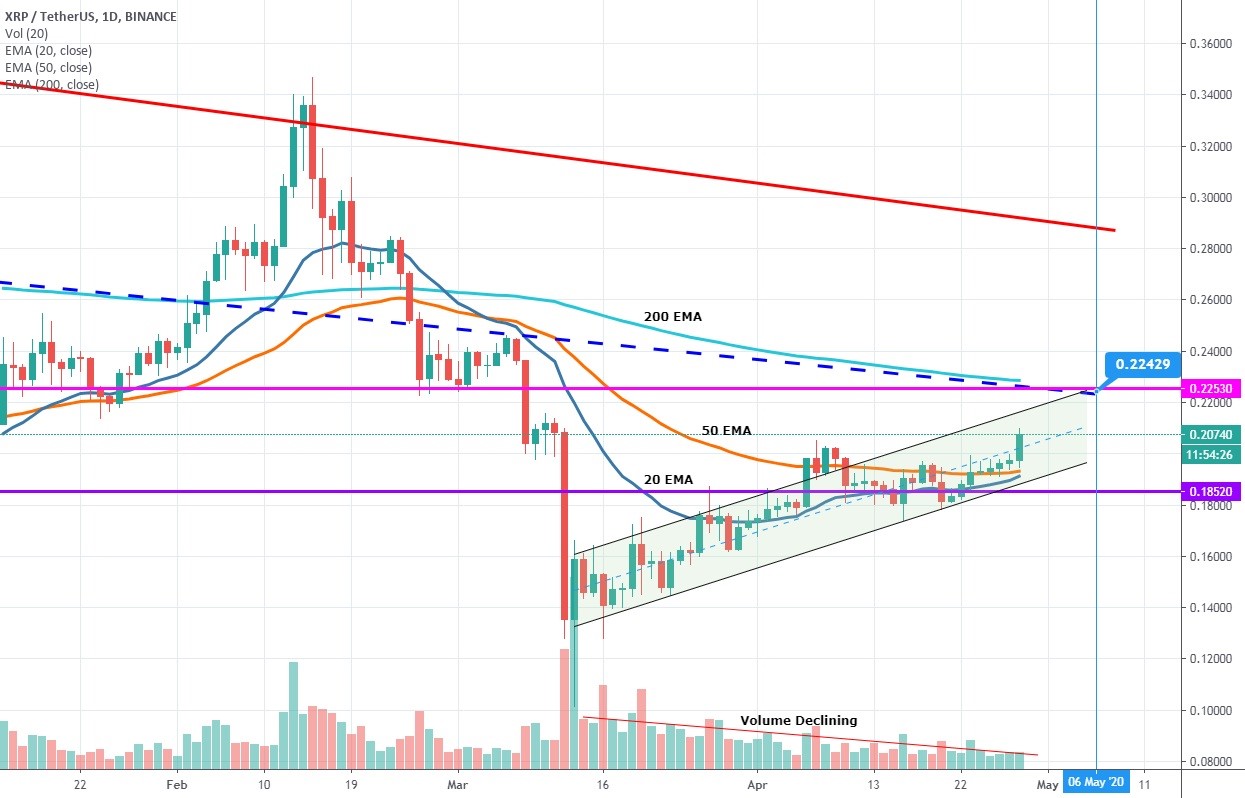 Ripple did so by forming a tidy rising channel within which the price should move up until the critical resistance area at $0.22. In doing so, the coin entrenched above both 20-period EMA and 50 EMA, which should serve as a durable support level moving forward. Moreover, both MA's are about to cross to the upside, giving XRP an additional bullish stimulus.

The area at $0.22 lies at the crossing of the inner vertical resistance line of the macro downtrend, the horizontal resistance level with which the price has been contacting since September 2019, and the 200-period exponential moving average. The crossing also happens to occur at the upper line of the ascending channel, so in summation, it will provide an immensely strong resistance through the impact of which XRP will first decline to $0.194 - $0.196, and then enter a consolidation phase.