Despite still being ranked as the 3rd largest cryptocurrency in the space, Ripple has gradually become something of a disappointment to traders and holders alike because of its inability to generate substantial gains, despite the company behind the coin making significant efforts at the business side.

The latest instance of Ripple’s business deals includes the partnerships with the South Korean payment gateways Hanpass and Sentbe, under which the payment services will incorporate the RippleNet solution to facilitate the money flow. The news about the deal surfaced on February 25, but, contrary to expectations, the price reacted negatively by continuing to tank, dropping way below the 55-period moving average on the next day. 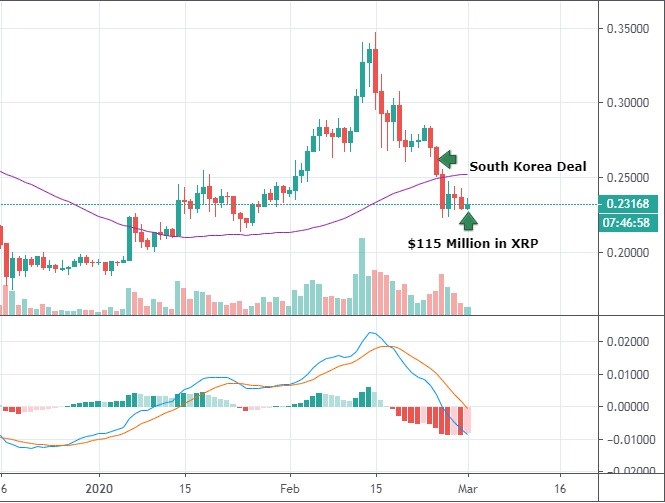 Some might justify it by the fact that the entire market is in a dire situation right now, but the truth is that the XRP price hasn’t even flinched at the news and continued taking a nosedive, which is uncharacteristic for a top cryptocurrency. The news about Luno, a cryptocurrency exchange domiciled in London, adding XRP to its roster after a year-long poll, had also failed to exert a positive impact on the price. Apparently, traders are worried that the management of Ripple has the intention of degrading the value of the coin by regularly dumping substantial sums of money in XRP from the Ripple Escrow Wallet. The last one happened on March 1, as $115 million in Ripple was released to “fund the system development.” So far, it had little to no effect on the price.

In one of his latest interviews, David Schwartz, the CTO of Ripple, revealed that the developers are working on a brand new feature that would allow users to issue their proprietary digital tokens on the XRP ledger, the value of which should be pegged to a certain asset. The executive didn’t provide the exact date of the feature release, but perhaps this one would give the coin a much-needed boost, given the favorable situation on the market at the time of launch.

The charts tell the story

The occurrences on the weekly time frame doesn’t appear to be too optimistic for XRP since the price action went fully outside the uptrend construction - it has not only failed to make higher lows but actually swooped down to $0.23, a strong support (previously, resistance) level around which it has been circling for the past couple of months. Besides, XRP failed to break through the 43-period EMA even at the peak of the rally, leaving it in the bear claws. 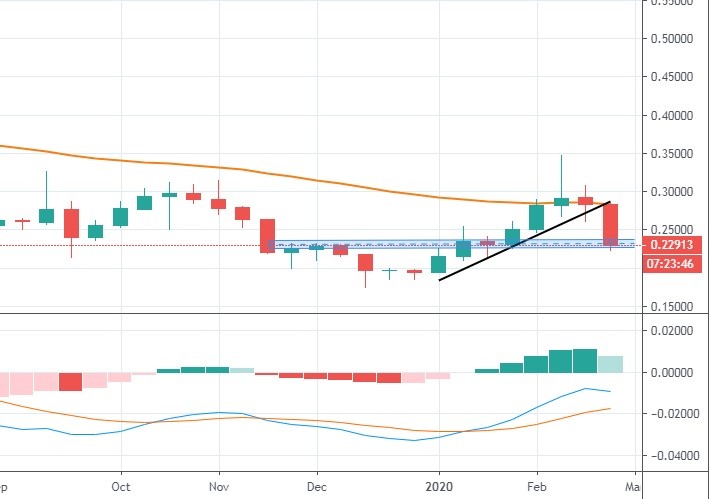 Here the price might make an attempt to bounce back to $0.28, if the market suddenly stops panicking, but it’s most likely that the 3rd cryptocurrency would begin to consolidate at the present level. 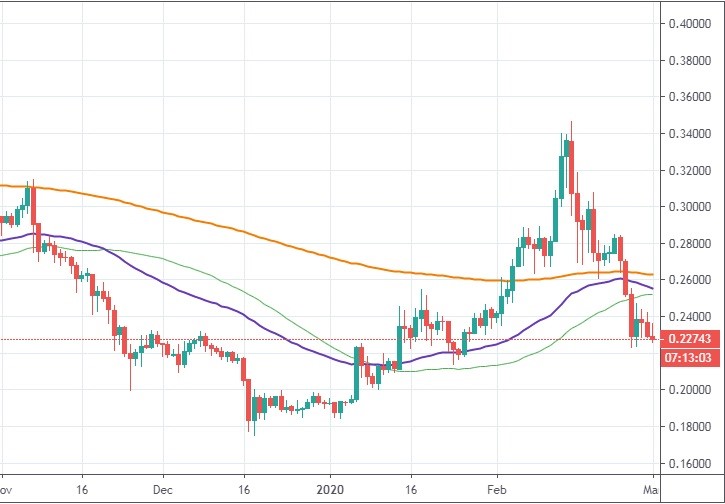 The outlook doesn’t get any better when switching to the daily time frame. The price of XRP is currently below the 55-period moving average (colored green), which is a strong signal that the trend had already switched to the bearish stance. Moreover, the 50-period exponential moving average (purple) is presently below the 200-period EMA, which serves as a further confirmation of Ripple’s bearish intentions. Evidently, going long on Ripple right now would be counter-effective, though this situation also presents a decent shorting opportunity.