Ripple (XRP) is Finally Out of the Woods

XRP has been widely perceived as arguably the worst-performing alternative cryptocurrency out of the top 50, and for a good reason. The coin was being held in the bears’ claws for nearly 700 days, which had brought a lot of frustration and disbelief. But now it seems that dark days for Ripple holders are nearing the end as the coin has been smashing price obstacles left and right since the beginning of the year, having established the six-months high at $0.34 on February 15. However, XRP still has a long way to go before it could fully recover from one of the stiffest downtrends on the market of altcoins, as it’s still 92% away from its glorious all-time high of $3,92. 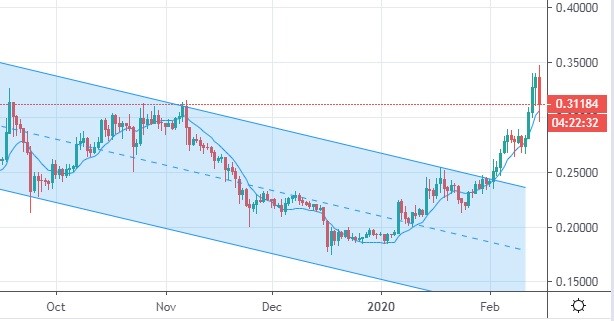 To put Ripple’s progress in more precise numbers, the 3rd cryptocurrency has improved its standings against the US Dollar by 34% over the 30-day period and also gained 18.5% against Bitcoin in a month, and 12,4% over the last week, which can be considered as a miraculous result for a coin which had been the main object of ridicule in the crypto community. Bear in mind that this respectable price surge took place after the company executive decided to flood the market with their reserved coins in order to be able to fund the project’s business operations.

Since Ripple is fundamentally designed to serve the needs of banking and financial industries, its price is particularly dependent on the news about the newly established partnerships. This wasn’t always the case, though, since the announcement of the deal with money transfer service MoneyGram last year had failed to exert any tangible impact on the value of XRP.

But things are different now that the altseason appears to be developing in full swing.

The news about the conclusion of the deal between Ripple Labs the National Bank of Egypt (NBE) regarding the incorporation of RippleNet, which surfaced on February 12, had taken the price on a 24% rally, which pushed through the fortified resistance at $0.3 that held since July 20, 2019.

Since the day of the downtrend reversal, Ripple has been duly respecting the 22-period EMA, staying right above it on the daily chart, confirming the notion that the bulls have taken over this market.

As of the time of writing, XRP, along with the entire cryptocurrency market, is undergoing a harsh price drop, which seems to have come out of nowhere, as it often happens in this space. However, even after this drop, Ripple managed to remain above the EMA, which could be considered as a show of strength. 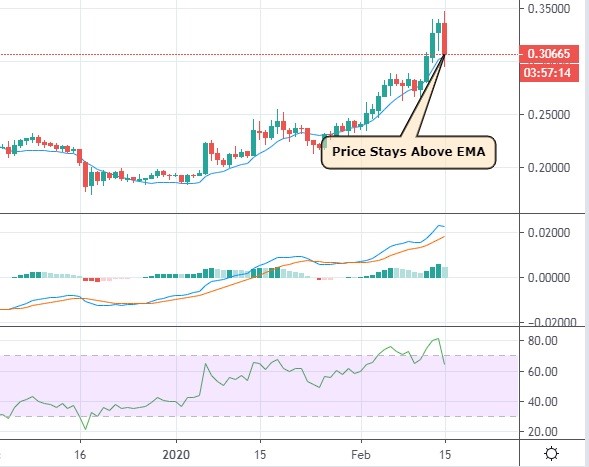 Moreover, it resulted in merely a slight disruption in the MACD movement, causing only a slight shrinkage of histogram and approximation of its signal line with the moving average. This could mean that the sudden market decline, which must have sent many inexperienced traders into a panic sell mode, could be just a part of a healthy retracement, which Ripple needs after a powerful upside swing. However, we shouldn’t deny the possibility of a more substantial price regression, given that XRP has been overbought for quite a while.