Although many people are skeptical about altcoins, claiming that they are already past their prime and the long-awaited second alt season will never occur, the stats speak quite the opposite. There are plenty of cryptocurrencies from the Top 50 that had displayed incredible gains over the course of the current year, and even now, after the September market drop, possess enough potential for continuing growth in the next six months.

One of such cryptocurrencies is named Ravencoin (RVN), which emerged in 2018 as a hardfork of Bitcoin that runs a blockchain ecosystem for the peer-to-peer exchange of digital assets and their ownership rights. Ravencoin is viewed by many as a significant improvement to the Bitcoin and Ethereum blockchains since the nodes of the former are unable to recognize an asset that is integrated into its code, while the latter is incapable of identifying the tokens present in smart contracts, which could lead to all sorts of confusion.

Ravencoin resolves these issues by incorporating the X16R hashing, along with 16 different mining algorithms, which, besides enabling the users to send and receive digital assets, allow for improved censorship resistance and privacy. Many members of the crypto community regard Ravencoin as one of the most promising cryptocurrencies that surfaced in 2018. Such positive sentiments can be explained by the genuine applicability of this solution, as well as its powerful price movements, as seen on this all-time chart. 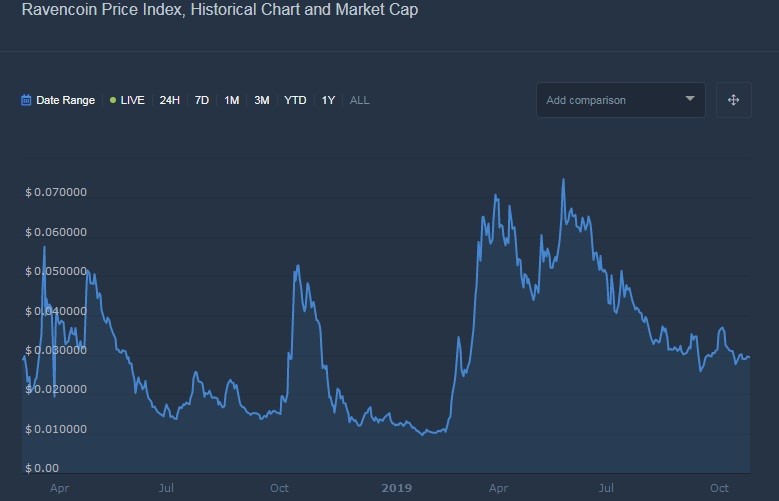 Right now, Ravencoin maintains a healthy position in the rankings, being placed at the 41st spot on Coinmarketcap. During the last few months, RVN has seen several price drops, from which the coin had recovered rather quickly and with good upward impulses to the area of $0.4, though, in general, the price is still consolidating with slight hints at the bearish trend.

The current market capitalization of Ravencoin amounts to $140 million, with only 4,8 billion RVN token being already in the circulation of the total supply of 21 billion. 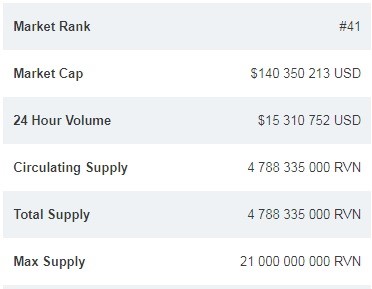 Although the difficulty of RVN mining increases continuously, the inflation remains an issue since there are approximately 70 million new Ravencoins entering the circulation on a daily basis, hampering the demand for RVN and diluting its value. But this also means that Ravecoin could still be undervalued, even though it showed massive gains of 121.3% on the year-to-date chart, which is only slightly lower than Bitcoin’s 145%.

RVN at the tail end of 2019 and going forward

Ravencoin is currently is the phase of lingering correction after hitting the all-time high of $0,08 on June 3. Whether or not the price of RVN will go deeper than the established support of $0,028 depends on the overall market conditions. Nevertheless, Ravencoin has already proven to be quite resilient to market downfalls, so even if the drop happens, the coin is likely to recover promptly.

The majority of indicators show that the crypto market, along with Ravencoin, should continue moving sideways for the remainder of 2019, with possible 5% to 10% short-term moves in either direction. In 2020, we should expect the introduction of the Messaging and Voting features, which should reflect positively on the price of Ravencoin. Should the team resolve the inflation issue, the value of RVN could easily reach $1 even in Q1 of 2020.