Qtum has never belonged to the class of top cryptocurrencies, but it definitely should occupy a slightly higher position than it is now. This statement is based on such an important criterion as daily trading volume, which is inarguably one of the most genuine indicators of coin’s popularity and acceptability. 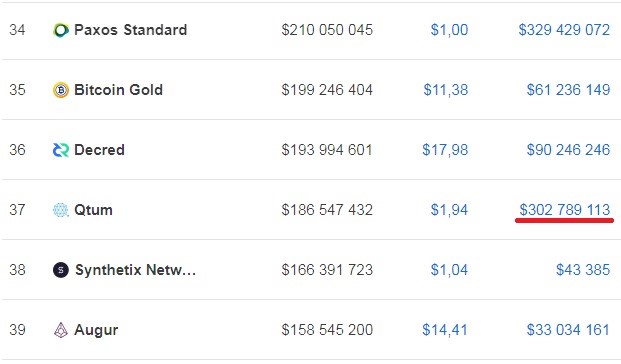 When it comes to Qtum, its trading volume surpasses that of its competitors by miles. The only cryptocurrency that boasts the better showing is a stablecoin Paxos Standard, but that constitutes another case since this coin is listed on the vast majority of exchanges, whereas Qtum is being traded on the platforms that have medium to low liquidity, such as Cat.Ex that accounts for 23% of the overall trading volume in the QTUM/TRX pair. LBank and Latoken also hold a decent level of Qtum trading volume, though it rarely goes above 7%. Major platforms like Binance, Huobi Global, and Kraken host less than 1%, which definitely hampers the coin’s results in terms of price action.

Going back to the topic concerning Tron, we have noticed a fascinating correlation between these two coins - so much so that the price action of QTUM literally mimics that of TRX, which becomes clear, judging from the comparison chart below. 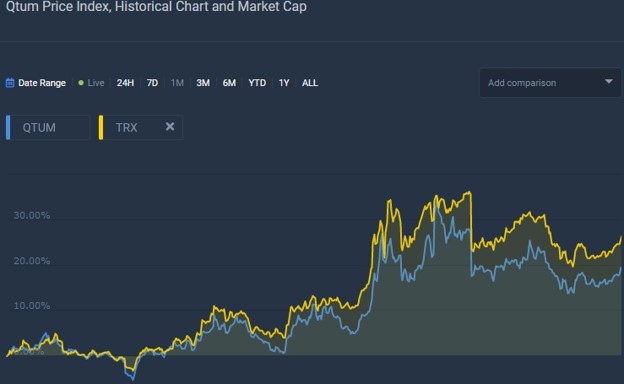 This could be an instrumental insight for those who specialize in trading TRX as it allows to virtually clone the trading strategy and apply it to QTUM, though it is obviously a self-sufficient coin.

A price driven by fundamentals

Another interesting observation regarding Qtum is that the price of the 37th cryptocurrency is susceptible to reports about system upgrades or hard forks that take place within its ecosystem. 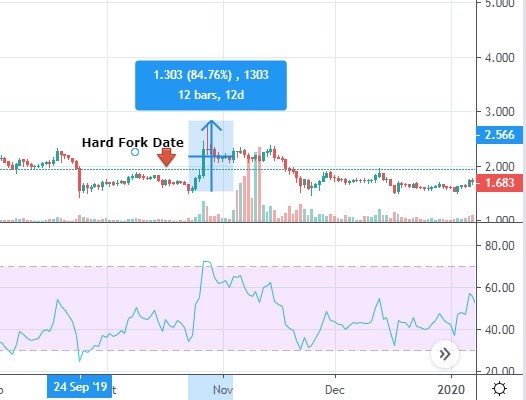 For instance, on October 17, 2019, the team announced that their PoS blockchain had gone through the first-ever hard fork, consequently upgrading to Qtum 2.0. As you can see in the chart above, just a few days later, the price skyrocketed by 85%, a feature that should be noted for the future trading strategies involving QTUM, because judging from the team’s blog, the project is continuously working on new updates and improvements.

Price forecast for the immediate future

Qtum began the year with a breakout from the Bollinger Band squeeze to the level of $2.2 where was decisively rejected by the bears. 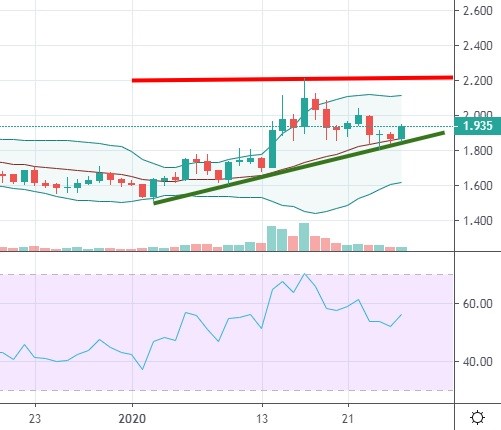 The trading volume has been on the decline after a price spike, but given that the RSI is rather far from the overbought area, there is room for a move to the upside.

Other indicators, such as the 50-day and 100-day moving average instills a bullish sentiment, although in a span of a week, the price is likely to be rejected at $2.2 again before performing a breakthrough from the ascending triangle.

The decline to $1.6 would mean the cancelation of the bullish scenario for the time being and reversion to the accumulation phase. However, given that QTUM has been consistently making lower highs since the beginning of the year, it is unlikely to reverse to a downtrend, unless a force majeure happens on the cryptocurrency market. Setting a stop-limit is a must, as always, but Qtum appears to be inclined to maintain the bull rally.