The so-called Black Thursday, which occurred on March 12-13, impacted the entire cryptocurrency market and sent numerous coins to their all-time lows. That is exactly what happened to Qtum (QTUM), as it had hit its deepest bottom at $0.77 on March 13. But in the crypto space, six weeks is sufficient enough period for a full recovery, which many coins have already done, with some going even higher than the pre-crisis level.

Unfortunately, QTUM has been lagging in that department as it displayed the capability to recover only about 50% of a loss, the result that is far from being satisfactory for a currency that still holds the 43rd spot in the global ranking. Nevertheless, QTUM has been maintaining a stable average trading volume of around $300 million a day across all platforms, so perhaps that’s the case when they say, ‘Little by little, one travels far.’

Still far away from the recovery zone

Despite getting a 31% price increase against USD in a month, and 15.5% over the last week, Qtum still looks reluctant to make any substantial price moves, even though the trading volume from the previous six weeks has been mostly on the buyers’ side. But serious traders don’t perceive this business as a race, knowing well that today’s underachiever could be tomorrow’s best performer. 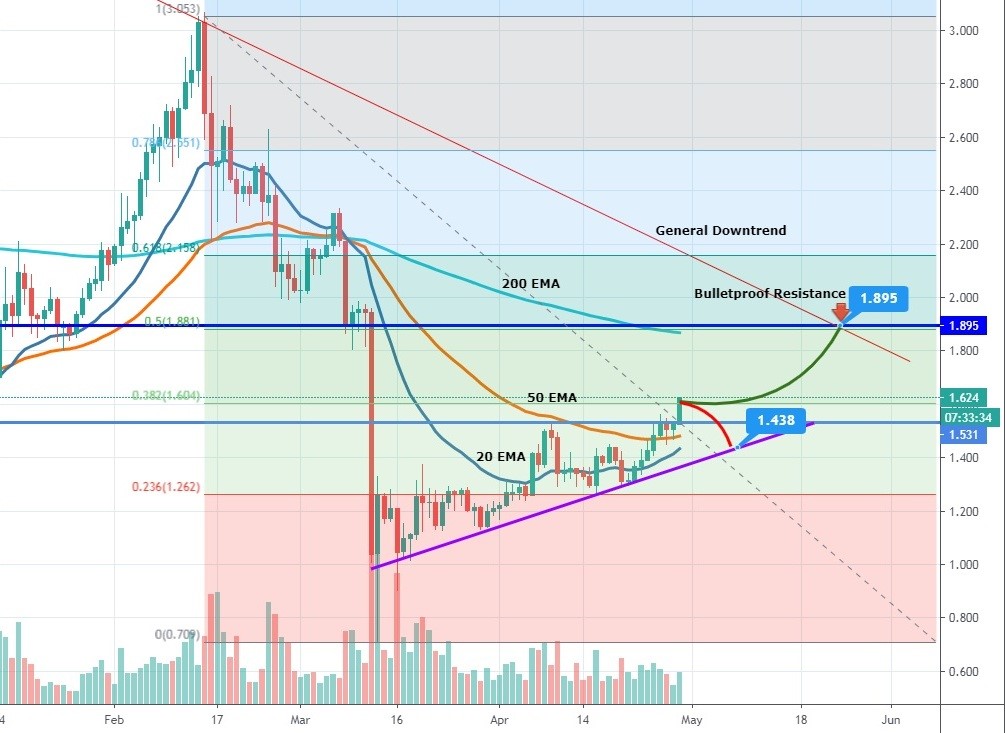 The daily chart reveals that the post-crash price action of Qtum has been nothing but an accurate minor uptrend, where the price makes higher highs and lower lows at each swing. What’s also notable here is that the coin seems to be particularly obedient to the Fibonacci retracement levels, as it has had its first resistance in the given phase at $1.26, which coincided with 0.236 on Fib, and now it is testing 0.382, although it should pass this level much easier, being incentivizes by the successful conquest of two exponential moving averages, as well as the first historical resistance level at $1.53.

We predict, however, that 0.382 on Fib could prove hard to penetrate at this point, firstly, because the upward price action is already overextended, and secondly, the overall trend structure demands that the price retraces to the level at around $1.43.

But that could not be the case since the current situation in the crypto market is affected by the expectations regarding Bitcoin halving, a crucial event, the hype around which has been pushing the prices upwards for more than a week. Should this sentiment persist, QTUM could disregard the said Fibo level, along with the trend structure demands, and shoot up another 18% to 20%, where it will bump into the bearish Mannerheim line that consists of another strong historical resistance line at $1.89, the 0.5 Fibo level, and 200-period EMA. Moreover, that bulletproof resistance level also intersects with the resistance line of the general downtrend, which only adds to its durability.

To summarize, in the next 14 to 21 day, we expect Qtum to either make a healthy retracement to $1.43 and then continue making its way up, step by step, or perform an 18% climb to $1.89, where the bears will reject the price aggressively to 0.382 on Fibonacci.