Polkadot (DOT): The Correction Bottom Is Yet to be Found

Polkadot (DOT) had entered the market in a great way by exploding 241% to the upside - from $2 to $6.86 - and joining the group of top 10 cryptocurrencies right off the bat. It seemed that the coin that is one of the main pillars of the sharded multichain network was destined to travel to even greater heights, but then the September dump happened, which tipped the scales in bears' favor. 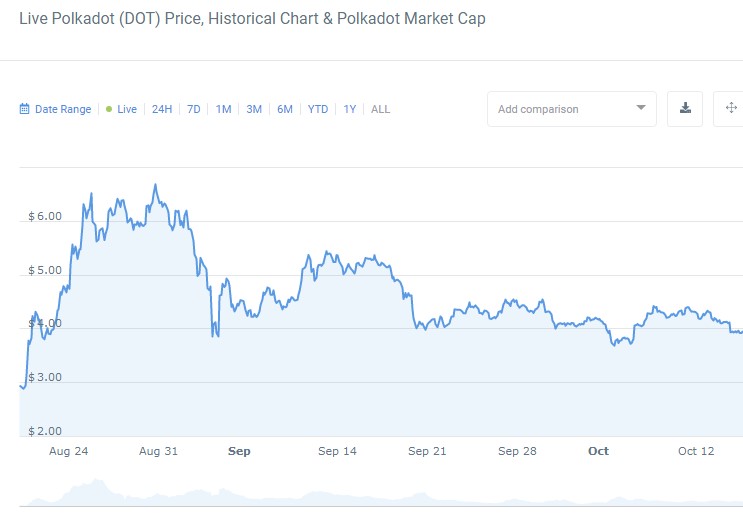 After the price had collapsed from $6.86 to $3.78 (a 48% devaluation) in just four days, it became clear that DOT's second trip "to the Moon" was delayed indefinitely. DOT is presently priced at $3.95 after making 0.48% to the downside in the last 24 hours. Nevertheless, even such a vehement bearish pressure couldn't knock DOT to the ground as the altcoin retained the high position in global ranks - right now, it occupies the 8th spot - though it did skim off a significant portion of market capitalization that went from $5.2 billion, recorded at the climax of the bull rally, to the current $3.36 billion. In the last couple of weeks, the average trading volume was notably stable, fluctuating from $320 million to $408 million, which translated to dull price action in a tightening range.

Polkadot is evidently far from realizing its potential of top gainer to the fullest extent, especially in the context of the recent price dumps in September and October, but given its great fundamentals, and the fact that it poses the real competition to Ethereum in terms of being a host network to smart contracts and dApps, we are reasonably certain that $6.86 doesn't constitute DOT's highest-ever value.

Seeking the bottom of the correction

Since there isn't enough historical data for proper analysis on the macro (weekly) time frame, we will carry out the Polkadot price prediction on the daily chart where we see the price ping-ponging between the descending support line and the middle line of Bollinger Bands. 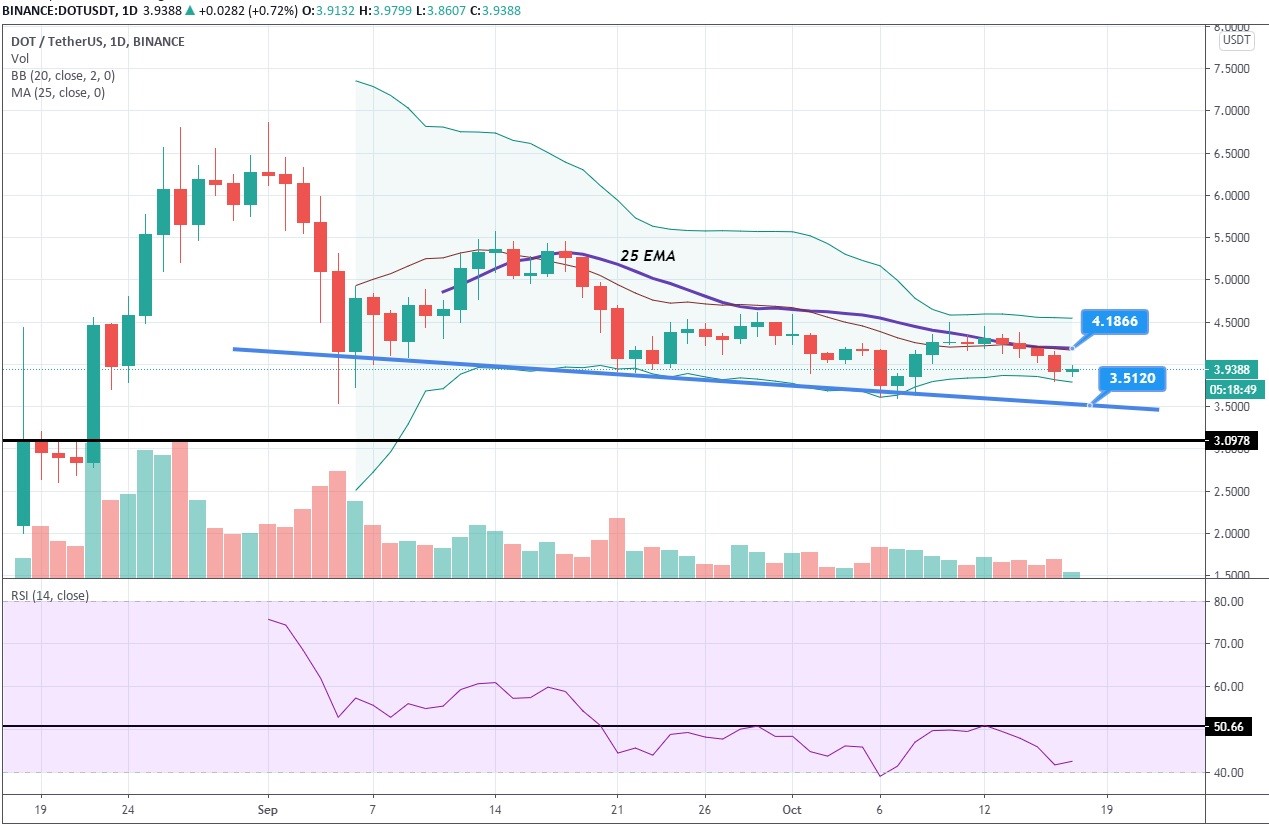 In addition, Polkadot seems to be very respectful of the 25-period exponential moving average, which further reinforced the resistance above the price action. However, the fact that the buyers aren't letting the price slip below $3.51, while the sellers are tightening the lid, significantly increases the probability of the volatility burst that is likely to have a bullish bias to it, given that DOT would rise above both 50 EMA and the middle line of Bollinger Bands.

Besides, the BB indicator is forming a squeeze that confirms our expectations of the approaching period of high volatility, though that squeeze could also extend in time that would result in the protracted period of consolidation between the designated price levels, and force Polkadot to new lows, presumably at $3.09, the first resistance during the August rally.

The 14-period RSI has bounced off the edge of the oversold area to the upside and has evidently found the resistance at 51, which it needs to overcome in order to confirm DOT's bullish intentions.

To summarize, Polkadot is still looking for the correction bottom, though the most obvious one lies at $3.09. Once it's found, we expect the price to explode to the upside in an attempt to take out the current ATH.