When witnessing the ongoing DeFi craze, which is already in full swing but will eventually run out of steam, a foresighted trader and investor should already be on the lookout for an altcoin that bears the promise of astronomical gains. And that next big thing could be Polkadot (DOT), a coin issued by the blockchain project called the Web3 Foundation that created a sharded protocol that offers drastic improvements in terms of interoperability and scalability, the Achilles’ hill of this otherwise revolutionary technology that is severely hampering the process of mass adoption.

Without delving too deep into technicalities, let’s just say that Polkadot represents a blockchain network that offers all-encompassing interoperability (it can transfer not only tokens but also digital assets and data between different blockchain, including the non-Ethereum ones) and scalability that is ensured by the dispensation of transactions across multiple blockchains.

The project also places special emphasis on having a unique governance model where each blockchain is governed separately while being a part of a common security system. The Polkadot token itself has three core functions: staking, network governance, and bonding.

Many experts and cryptocurrency funds, such as Spartan Black, are convinced that Polkadot has enough firepower, both in terms of its fundamental value and prospects of future price appreciation, to enter the ranks of top cryptocurrencies by market capitalization. Given that this young company has already attracted 197 projects to its ecosystem, and the fact that it lists Gavin Wood, a sort of legendary coder who stood at the roots of the Solidity programming language, DOT is the coin that could really blossom over the coming year.

The first days of DOT trading were exceptionally bullish

We say that Polkadot is a very young altcoin because it was listed on exchange platforms, including prominent ones like Binance, only eight days ago, after the coin went through a denomination process on its network. In this very short period of time, the value of DOT has soared by more than 100% and became one of the leading gainers on the market. 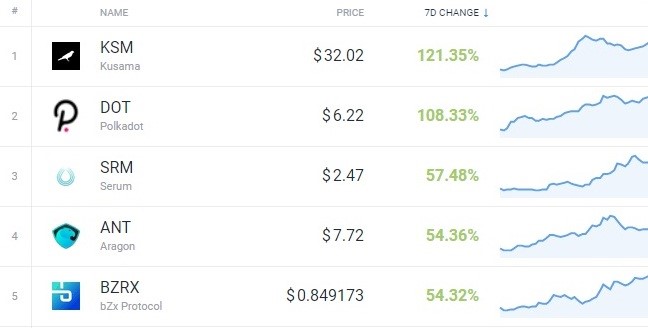 What’s also fascinating about Polkadot is its trading volume that has been rising exponentially during those days, going from $48 million to $1.28 billion in such a short period of time.

An exploding volume is a clear sign of massive demand for DOT; besides, the company is yet to reveal its market capitalization - once it becomes known, the price could be further catalyzed to the upside.

Since this DOT price prediction is based more on fundamental analysis, due to a lack of data at this point, we left the technical analysis for dessert, so to speak. The daily chart shows that Polkadot has dealt quite comfortably with the first significant retracement that took it from the ATH at $6.8 to the support at $5.4. 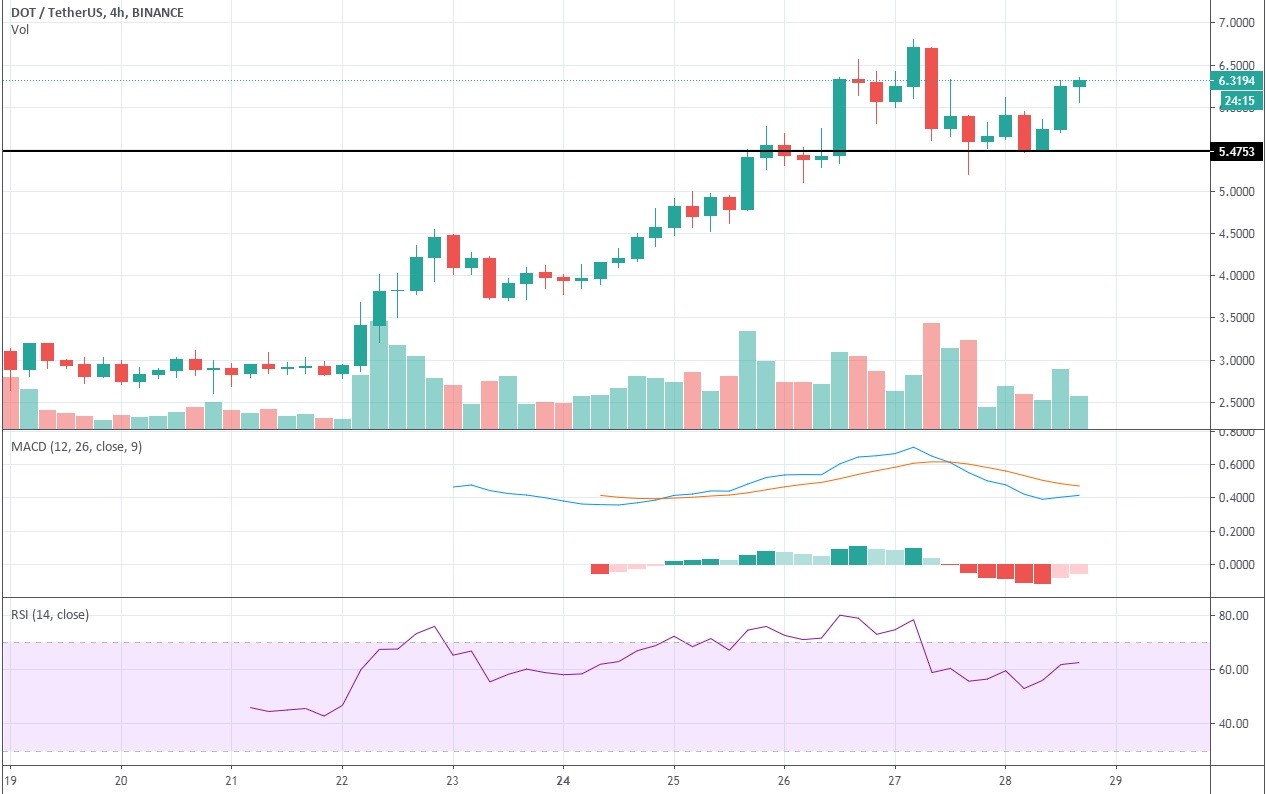 The buyers are very aggressive in this market, especially if the price opens with the gap above the close of the previous bullish candle, which is precisely the pattern that is forming right now. We reckon that it is only the start of a much larger uptrend with the first price target being set at $10.

Polkadot (DOT): The Correction Bottom Is Yet to be Found