Even though OmiseGO is dangling at the bottom of the top 50 in global rankings and has a somewhat mediocre daily trading volume, over the course of the last month, it displayed a very confident, and what’s most important, positive price action in a pairing with stablecoins.

Whereas the previous year has proven to be somewhat disappointing for OMG due to the double-figure losses across all major markets, in comparison to its starting position in January 2019, the new calendar year began quite positively.

Over the last 30 days, OMG has been the most profitable for traders who specialize in the USDT market as it gained 37% in the designated period of time. At the same time, the coin is also acting strongly against Bitcoin, having acquired 7% in value against the dominant cryptocurrency. 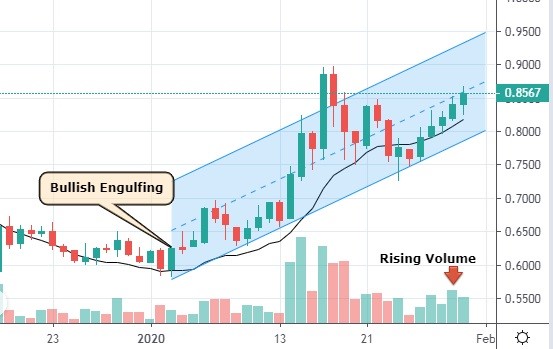 OmiseGO’s bull rally began on the first days of January with an evident bullish engulfing pattern that should have been interpreted by traders as a signal for entering long positions. The fact that the price performed this move while being atop the 25-day DEMA served as an additional confirmation of the upcoming shift in the market.

Upon that, OMG has gone on what turned out to be a healthy swing to the upside, which ended in the price reaching $0.9, testing it twice, and then making a textbook retracement. After taking a breather and establishing an interim resistance at $0.75, and a higher low, the coin is now gaining an upward momentum again on the back of a consistently high trading volume.

The retracement period ended with yet another bullish engulfing candle, which gave way to a 4-day long mini-rally that still hasn’t run its course as the RSI has barely crossed 60. The price of OMG has also risen significantly above the 50-day moving average, which is another evidence of the unarrested upside rally. If that’s the case, then OmiseGO should establish either the next higher low at $0.8 or the higher high at $0.93. There is a lesser probability of OMG shooting straight for the $1.07 resistance, but if it does, the price might experience a steeper retracement since that level could prove stubborn as it was a spot where OMG performed the triple top pattern that preceded the reversal of a bearish trend. 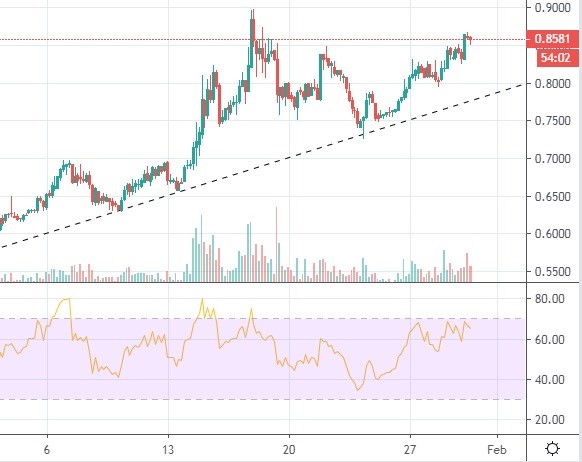 On the 4-hour chart, OMG is also behaving really confidently with regard to higher lows, but the fact that the 14-day RSI is already scratching 80 could mean that the upward momentum could lose its power soon, and the price would descend to $0.8, which, as already mentioned, which would be an acceptable retracement bottom.

Giving in to Bitcoin 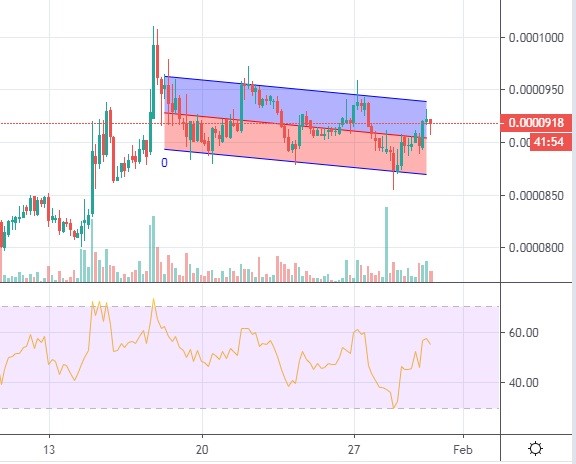 When it comes to competing with Bitcoin, OmiseGO hasn’t been doing well as the last retracement after a run to 1000 Satoshis has turned into what looks like a reversal, judging from the fact that the coin began moving in the descending channel. If this action persists, OMG could make a new lower low at 860 Satoshis, thus confirming the reversal.

Therefore, if you are interested in trading OmiseGO, which is present on multiple cryptocurrency exchanges but mostly on MXC, then it would be logical to go long against USDT and, conversely, short it when trading OMG/BTC.