At the moment, it seems that the cryptocurrency market is going through a period of stagnation, which replaced the summer euphoria caused by Bitcoin and altcoins having the most prolonged bull run since 2018. OmiseGO (OMG), a cryptocurrency that serves as a driving force behind the OmiseGO Network, has followed the short-lived upward movement, which brought it to the yearly high of $2,78 that occurred in the first days of June.

After the bull run was abruptly ended in mid-August, the entire cryptocurrency market has begun a gradual decline that took place in three stages, dropping by more than 10% at a time. OMG had followed the same scenario to the letter, and has even “beaten the target” by retracting by almost 50% in the middle of July.

In the following months, OMG continued its journey down south to the point where it is dangerously close to entering the all-time low territory.

Current performance and forecast for the remainder of 2019

Right now, OMG keeps upsetting the holders - except, probably, for those who plan to short this coin - since it shows practically no signs of recovery, or even an intention to do so, after the recent market downfall. On the 12-hour timeframe, OmiseGO displays one big red candle after another, each pushing down the price by around 20%. 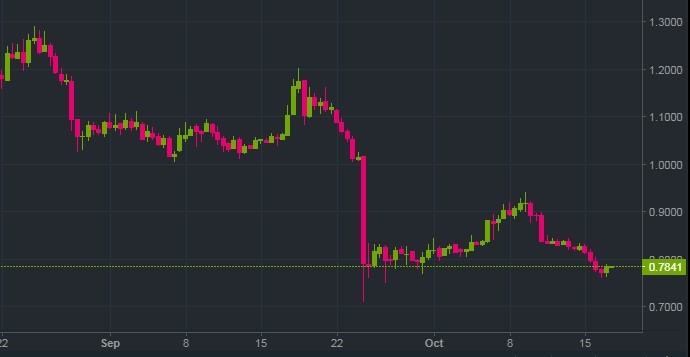 As of the time of writing, the price of OMG is $0,78, a result of a smooth down slide since the beginning of the week from the resistance level of $0,89 to the current support area at $0,76.

The gradual price decline has happened in the background of mixed news about the company behind OmiseGo. In March, there have been reports about the alleged intention of Thailand’s largest private company - Pokphand Group - to acquire the crypto project for $150 million. Obviously, this didn’t play well with the OMG holders and the crypto community in general.

On the positive note, OmiseGO has recently become a member of Universal Protocol Alliance, a joint venture of several well-known blockchain projects, among which are Brace, Bittrex International, and Uphold. The Alliance is working on a platform where users would be able to create unique digital assets and use different cryptocurrencies within the confines of a single blockchain network. Should the development of this solution end up successfully, the value of OMG will increase accordingly. However, there is still a lot of hard and meticulous work ahead of the Alliance, so the expected price surge is not likely to happen this year.

Over the course of the remaining months, OmiseGo is likely to continue consolidating near its all-time low zone, perhaps even making some shows of strength by breaching the $1 resistance level.

What to expect from OmiseGO in 2020

It is possible to say with a high level of certainty that the cryptocurrency market will display substantial growth throughout the winter and spring of 2020, mainly because of the approaching Bitcoin halving, which is due to happen next May. Historically, the price of BTC has been going skyward prior to the halving, pulling up the entire crypto market with it. Therefore, the first half of 2020 might be a great time to cash in on OMG, which one could accumulate at the current bottom.

OmiseGO Rallying for Its Life