When taking into account only the price action of OmiseGo (OMG), the coin proves to be neither overly promising nor disappointing. For the most part of the previous year, it has been just average. OMG did lose 55% over that period of time, with the hardest losses obtained during the Black Thursday, but so did the overwhelming majority of other cryptocurrencies.

On the macro level, OmiseGo remains near the very bottom - as of the time of writing, OMG is priced at $0.72, whereas its all-time low stands at $0.31, recorded in June 2017. Basically, it means two things: the coin displays relative durability during market crises, but it still has plenty of room to fall to the psychological barrier that is the all-time low, which most coins have already passed during the coronavirus crash. Traders should consider both these scenarios when devising their strategies.

When we take a look at the weekly time frame, it becomes evident that OmiseGo has been in the secondary downtrend for a couple of years with no major intention of breaking out of it - the price has been consistently making lower high and sliding downhill without any long periods of consolidation that could have provided hope for the upward spurt. 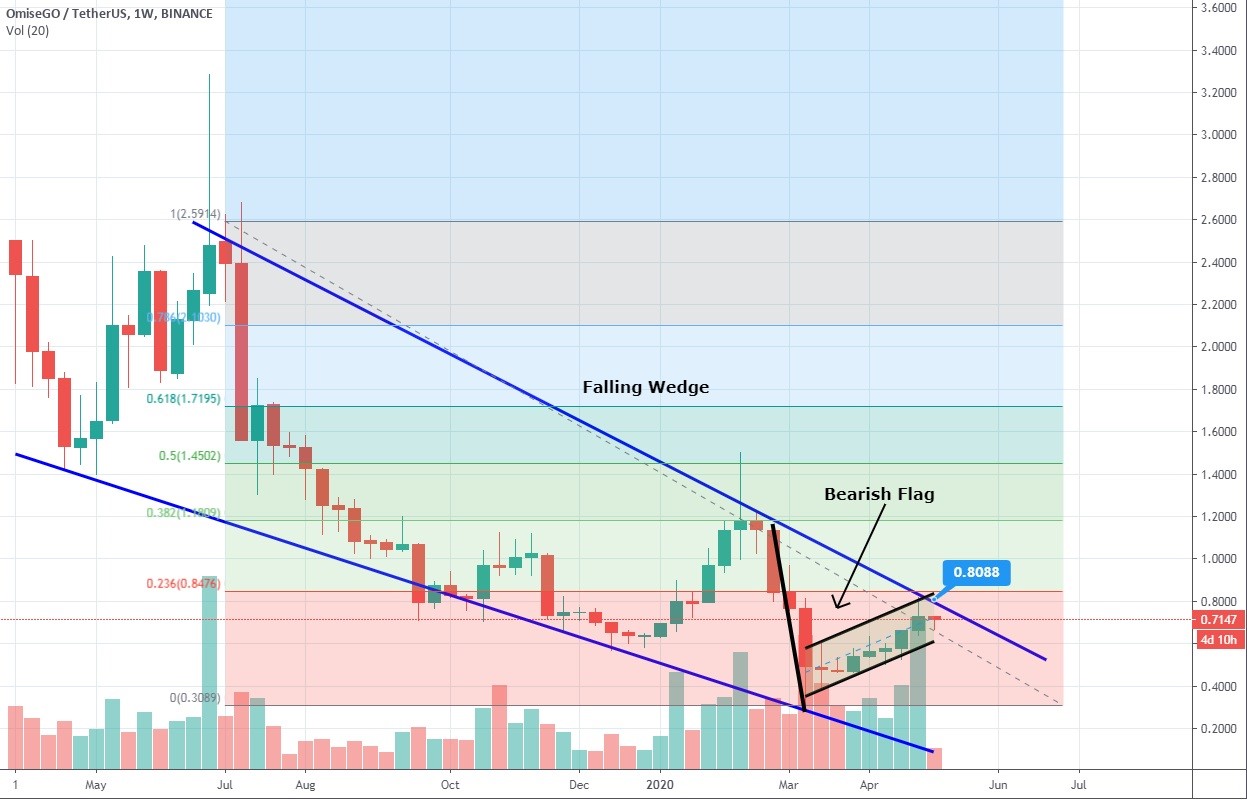 However, the keen eye should have noticed that since last April, the clear-cut descending channel has been gradually morphing into the falling wedge, which is widely considered as a reliable bullish pattern. But so far, OMG hasn’t revealed any serious intentions to perform a breakout, although the massive bullish volume from the past six weeks, which has been increasing over time, suggests that the next weekly candle might be that fateful one that would give the bullishly-minded OmiseGo traders some hope. Although that volume only matches but does not exceed the bearish one from the last downward swing, which means right now, OMG might simply be at the point of resolution of the bearish flag to the downside. If that’s being the case, OmiseGo could still touch the price level at $0.8, but would ultimately go sloping down to the levels below $0.4.

The realization of that particular scenario doesn’t mean that the coin abandons its bullish intentions, but the breakout would obviously get postponed and might occur at the lower price level. But do keep in mind that the approaching Bitcoin halving, and its consequences for the entire market, shouldn’t be thrown off the scale. Historical data shows that BTC rallied shortly after the halving event, and the rest of the market followed. With halving being only days away, the expected retracement of OMG after five bullish weeks mightn’t be too deep. Therefore, traders should be monitoring this market closely and wait for the price to climb above the 0.236 Fibonacci level, which would be the point of breakout.

When it comes to the pairing with Bitcoin, the situation for OmiseGo looks sad - the price of the altcoin has been in the permanent downtrend for two years, and nothing will be able to change that, especially since Bitcoin is going to lead the way after the halving. Therefore, traders should expect OMG to fall below 7,000 satoshis, and go deeper as BTC’s strive to last year’s highs will grow.