The global crisis is far from being over, but at least we are now witnessing the consolidation phase that gives hope for further stabilization and recovery in the next few weeks. However, this optimism is based on the notion that there would be no significant shocks in all markets, not excluding the cryptocurrency ones, caused by another black swan or perhaps the worsening of the COVID-19 pandemic around the world that would only deepen the unfolding economic crisis.

OmiseGo tries to get out of the gutter

Sadly, the cryptocurrencies - OmiseGo in particular - have so far failed their mission of being a financial safe haven as 62% of its value had evaporated within as little as two days, resulting in OMG bouncing off the all-time low at $0.35 and landing in the current consolidation range between $0.43 and $0.55, which is also a part of the bearish flag from which the price is yet to make an exit. 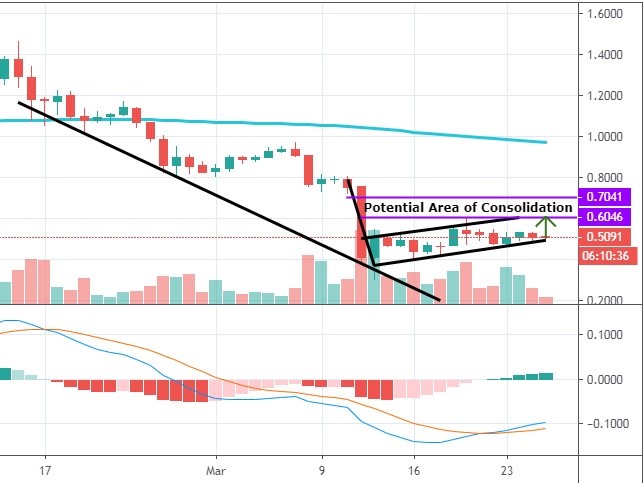 Although this particular flag formation appears to be overextended, which means that we might see the emergence of a mini uptrend that is likely to aim at the $0.6 price level, upon reaching which OMG would initiate another prolonged phase of consolidation above that support-turned-resistance line, with the ceiling for this consolidation zone being at $0.7. Obviously, this is a very optimistic scenario that would only become viable if the market won’t spring an unpleasant surprise on traders by going deeper underground, below the said all-time low. In case the price does go through the floor, there’s no way of predicting where it would find another bottom due to the absence of historical data for this particular region, thus no defined resistance levels.

Nevertheless, the main indicators on this time frame speak in favor of an upward move to the consolidation zone: Stochastic is chugging to 60, showing no intention of crossing over, which means that the market maintains the bullish momentum; MACD has impaled the signal line from the bottom up and began a gradual ascent from the extremely oversold region to -0.1, along with bulging green histograms, a sign of a further appreciation in the price of OMG.

Whereas it would take another week or so for the predicted move to take place, right now, the OmiseGo market is trending sideways, probably due to the absence of big players who would be capable of moving it in either direction. The presumption that big traders aren’t favoring OMG right now is substantiated by the minuscule volume on the smaller time frame and a slightly deteriorated average daily trading volume. 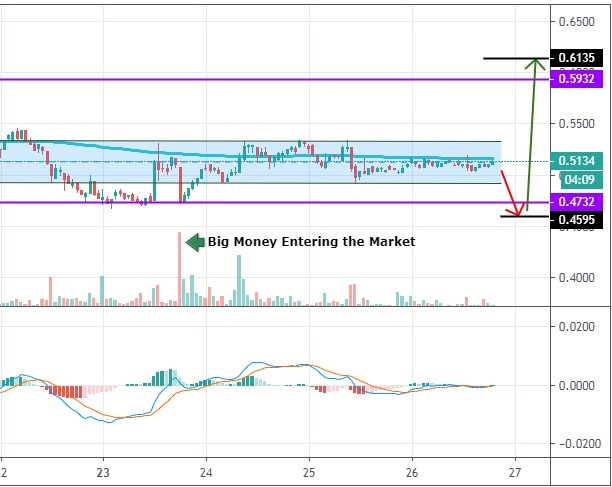 There has been only one instance when large players have entered the market, which found its representation in a significant sell volume on March 20 that closed the price at $0.47.

It’s likely that this level will act like a magnet that would eventually pull the price in its direction, hitting the stop-losses of many scalpers who are concentrated on the movement within the current channel.

In this market condition, the whales are craving for liquidity, which means that the stop-loss hunting will be the name of the game in the coming days. In the first round, the price will move to $0.45 or slightly lower to kick those who used the support at $0.47 out of the market and then shoot up to $0.61 to hit the higher stops, and then descend to the designated consolidation area.